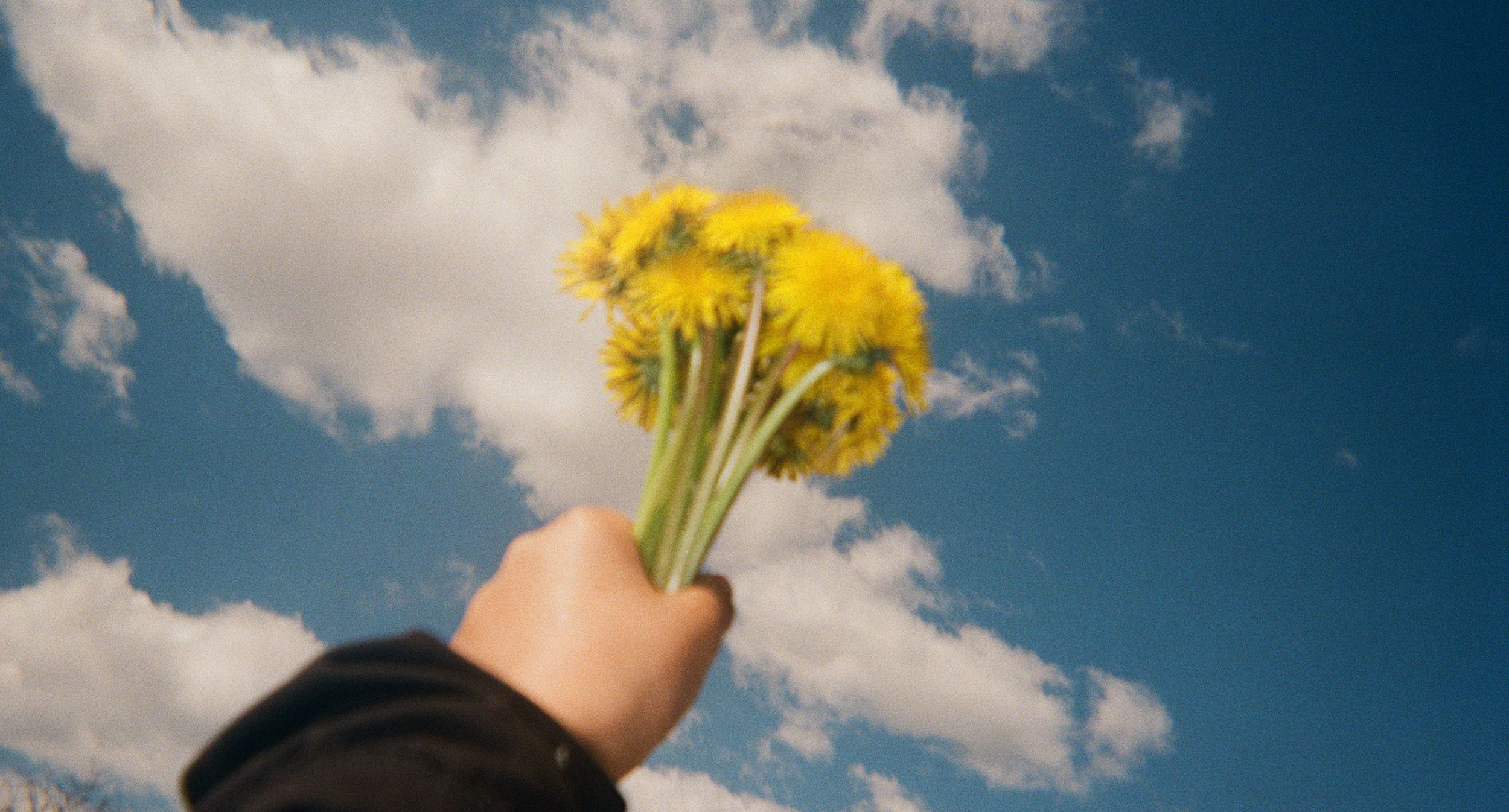 An angry guard dog who has become good during the war, selling humanitarian aid to buy forage for hamsters, riding a moped among dilapidated buildings — these are the subjects of photographs taken by children from de-occupied and war-affected villages of Ukraine. Zoborona spoke to the authors of the Behind Blue Eyes project — a series of pictures taken by young witnesses of the war — about how they had decided to distribute cameras to children and what came of it.

In the Pizzeria Basement

During the first week of the full-scale war, Dmytro Zubkov and Artem Skorokhodko sat in the basement of a Kyiv pizzeria that had been founded by Dmytro. There were also people in the bomb shelter who came looking for a safe place from shelling. When the shock subsided, an idea suddenly came: upstairs, above the basement, there was a spacious department with capacities that would be enough for 5 thousand pizzas per day.

There were no professional chefs in the basement. Despitethis, a team of marketers, translators, and two dogs (who were mostly degustating) began preparing food for those who needed it.

Over time, Zubkov and Skorokhodko received more requests: people asked for medicines and equipment for Teroborona and the military. Thus, within a month, the premises of Artem’s pizzeria turned from a charity kitchen into a full-fledged volunteer headquarters.

As soon as soldiers liberated Chernihiv Oblast from the invaders, Artem and Dmytro decided they should go there: the people in the liberated villages and towns were in grave need of food. The settlements were random: the military informed people that the Chernihiv region route would be opened in the evening. The boys googled the largest villages and decided that the priority was Yagidne, followed by Sloboda and Lukashivka.

“Even though people went through very difficult times, they held on great. An 80-year-old lady came to me saying: “Son, we don’t need food. There is some. Bring soap, shampoo, detergent, wet wipes, batteries, flashlights, and candles. We have no light, no water. It is what we need.” And you just were looking at that: half of the village is really gone. The other half is in ruins. And people ask for gloves because they have to clean up all this shit, and they already have crops.” Dmytro recalls.

Thus, Zubkov and Skorokhodko began to regularly travel to the villages of Chernihiv Oblast and cover the requests of the locals.

“I have notes on my phone. When an idea comes to me, I write it down. I really like photography, although I am not a photographer myself. It is such a cool thing. It is very atmospheric and tactile. We planned to hand out cameras to our friends for the entire summer [to document their military life in different cities]. Then we would make a small exhibition in different points of our pizzeria,” says Dmytro.

Zubkov did not open the notes on the phone for five months. And when he checked them, he found an abandoned idea with a photo project. At first, the boys wanted to distribute cameras to the inhabitants of the villages.

“I remember such a strange paradoxical feeling. Leaving the village, every time we experienced some emotions that were incompatible with what we had seen with our eyes. There is devastation all around, but you have such positive emotions. Faith appears that everything will be fine; such a lift. Mostly we felt it thanks to the children with whom we communicated [in the villages during volunteer activities]. I started thinking about how to record this emotion and convey it to residents of other settlements somewhere in Ukraine, where people may be depressed,” Artem explains.

“I remembered this childlike immediacy: how they kick a ball near a burnt car. I was like, “Damn, this is incredible.” But I did not want to document from the outside because I would broadcast my emotions. I thought that maybe the children could do it by themselves. We decided to try,” recalls Artem. “It seems that when you look at these photos, you understand that children perceive everything differently. There is no tragedy there, they cope with it. It forces me to rethink my vision and attitude toward some things. It is what I would exactly like to transmit.”

The guys thought about the name for a long time. I wanted something metaphorical but understandable. “Children’s eyes” and “Child’s gaze” came to mind. But those seemed awkward.

“Mother and her workers carry milk.”

“This is Vika and Pasha. They are my friends and they are not dating. Few people are going to listen to the guitar.”

The phrase “behind blue eyes” appeared by itself. Artem googled: in addition to the fact that this is the name of a song by the American new-metal band Limp Bizkit, it is also an idiom in English. It means the condition of a person in which he experiences suffering or negative emotions, but you cannot see them from his physical condition. To Artem and Dmytro it seemed that it was exactly about children in de-occupied villages.

“The battalion commander came to us and asked where the ATV was. He took it from the neighbors, but after a few meters, it stalled and he shot it.”

“To remember. We often used to walk nearby.”

“I am sure that this experience has left a strong impression on them. We may not see it now, but later there will be consequences. The children sat in the cellar for three weeks, they saw death and lost someone. However, now you can’t say they are children of war or children of occupation. These are ordinary children living ordinary lives. Therefore, this phrase gives the most succinct description of what we see in these children,” explains Artem.

At the same time, blue eyes are a metaphor for childhood. In English, there is an idiom “blue eyes.” It is about infantility, childishness, and naivety.

“This is a candle. Volunteers often came to the church, once they taught us how to make candles.”

The children had cameras. Zubkov and Skorokhodko conducted small interviews with little photographers. The questions flowed into the discussion of children’s dreams and wishes. The children made a list of birthday wishes: some ordered a Lamborghini, others an iPhone.

The children perceived the boys’ proposal as an interesting activity rather than a reflection. Younger children focused on animals and flowers, older children on documenting the ruins. The latter was more closed-minded. Those who had pigs, dogs, flowers, and cats are more talkative.

Artem and Dmytro brought cameras and invited the children to participate in the project. Some were not immediately interested, and some tried and realized that they did not like taking pictures. Currently, the “behind blue eyes” project presents the works of nine children.

“This is what our playground looks like after russians. We used to spend time here often. And now we continue — the house is left, we are sitting inside on the phones.”

In this project the guys call themselves Instagram curators. On Instagram, Artem says, it is much easier to implement a project so it could have a complete look. And on July 23-24, an exhibition of children’s photos was held in the capital’s Avangarden gallery.

The authors of the project choose the pictures from all the films taken on their own. There are no good or bad photos, just some that resemble the previous ones, so duplicate photos are filtered out. A lot of illuminated and defocused shots. But there is also an idea, the author also saw something.

“Each photo makes me imagine what it was. It is interesting to understand what the child thought about himself and how it all happened. For me, the essence of the project lies precisely in these reflections. It’s not just a matter of coming and evaluating photos by technique, by authenticity. Any child took a photo like that because they have no icons, and they don’t copy anyone,” explains Artem.

“I took a picture to remember — what a church was like.”

“It is next to my house in Chernihiv. When I saw high-rise buildings on the news, I was afraid for our house and my friend. But everyone survived.”

The boys’ favorite photo is a picture of 11-year-old Valya’s bouquet of dandelions. It contains a lot of information, says Artem.

“There is blue and yellow. What did she mean by that? Why did she do that? This blue sky gives a certain feeling of relief and peace. The funny thing about this photo is that you can’t even explain why it touches you,” explains the curator.

“My brother Oleg and a friend are peeling potatoes at three o’clock in the morning. They will fry it.”

“My brother and I glued the stickers. Someone gave them to my brother. From the “Right Sector”.

Another special shot for Artem is a photo from a sale taken by 10-year-old Masha. The girl took sneakers, soap, a razor, and a lighter from the humanitarian worker, found cabbage in the garden, and decided to sell it to earn money. The boys think she needed the money to buy sawdust and food for the hamsters. Mom bought cabbage, grandfather a lighter, and dad sneakers — her father had nothing to wear because the russians stole his shoes.

“I collected the humanitarian items and then sold them in the yard. Mom bought cabbage, and grandfather bought a lighter. Dad bought sneakers because the russians took everything – there was nothing to wear. I earned 250 hryvnias.”

“This is our church. I took a picture when I was riding a moped with my grandfather.”

Dmytro likes the picture of 13-year-old Bohdan, which shows the big black dog, Dick. Before the war, he sat on a leash and was an angry guard dog who barked at everyone. Then, when the war started, he broke off the chain and ran away. He was gone for a week. Later, Dick ran back, and the owners closed him in the kennel again. The shelling began, and he acted like concussed. The dog ran away again. And when he returned, he became kind.

“Very, very interesting story. The dog became completely tame. He comes to you, you can pet him. His owner, Nina, says: “God, you would have seen him three months ago. It was a dog that I was afraid to approach,” says Dmytro.

“Once, we found three grenades: two of them were sticking out with rings, and one was without a check, just lying like that. I even stepped on it when I was walking. Screw it. And this rocket is lying in the forest. No one knew about it then and probably still doesn’t.”

“This is Dick. He was an angry dog, but during the occupation, he was concussed and became very good. Now he’s lost.”

Now Dmytro and Artem are planning to expand the project — at least to visit one village from each war-affected region.

“It’s actually not that easy to do: it’s not like you come, give the cameras, and go. I think the contact we managed to establish [with the children] played an important role. We understand that we have the resources to go and do it again. I really want to get a complete picture of this history along the front, and eventually, after the end of the war, make a photo book,” says Artem.

“And they run away through the checkpoint! I was just sitting on a tree…”

“Here is our gate. Our yard was bombed, and the shed. We were in the cellar, right there.”