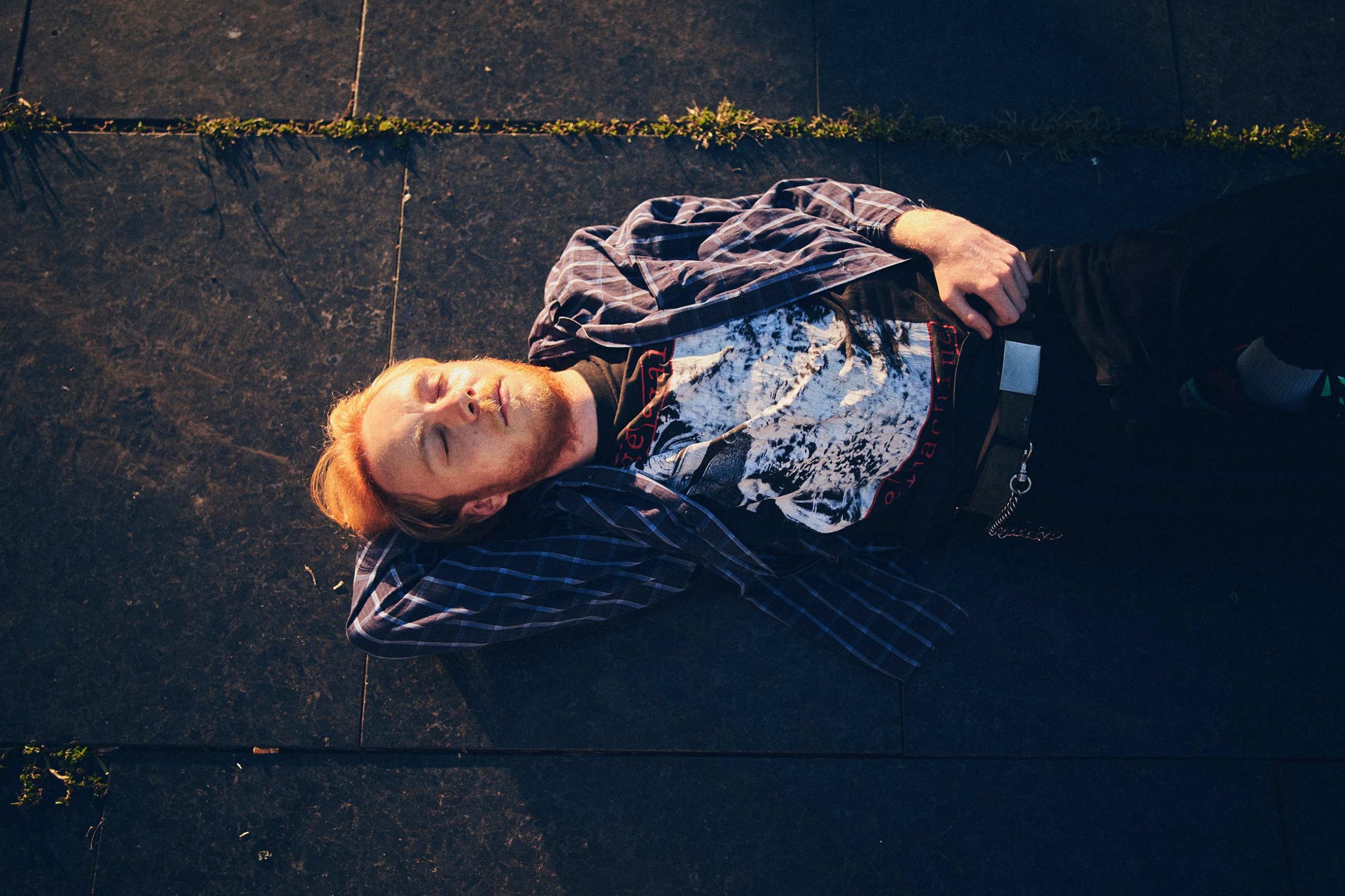 Zhenya the Tram is an artist and activist. He was born and raised in Bakhmut where, in 2019, the organisation Donbas-Queer was set up. This significant event was quite out of the ordinary for this provincial town in an industrial region. Zaborona’s Deputy Chief Editor, Yuliana Skibitska, spoke to Zhenya about ways to protect LGBT+ rights in Donbas, and why organisations like Donbas-Queer are needed in the region.

Zhenya is 24. He was born and brought up in Artyomovsk, which was renamed ‘Bakhmut’ in 2015. This small city borders non-government controlled territory in Donetsk region. It has a population of around 70,000. As Zhenya rightly points out, before the war Artyomovsk was known only for its salt and shampanskoye – sparkling wine similar to champagne. However, since 2019, it has also been the home of an organisation whose name needs no explanation: Donbas-Queer.

“I wanted my home to be a safe space,” Zhenya tells me. “I also felt there was a need for it, and that there were other people out there who were ready to work with me to create it.”

The only tram in town

Zhenya says that even as a child he felt there was something unusual about him. “I always felt like I was different. It wasn’t just about my sexuality. I always wanted to know what new things were happening, to be in different gangs. I was really into raves and festivals. But when I started to tell other people about it, they just didn’t get it. People used to say ‘Ugh, what do we want with that stuff?”

Zhenya acquired his pseudonym, ‘the Tram’, in 2015. He had produced a collection of poetry called ‘Public Transport’. “We didn’t have any trams in the city where I lived, so I decided to be the only one!” he laughs.

Ukraine’s first ever LGBT march was supposed to take place in 2012, however, because of attacks on the organisers by opponents from far-right and conservative Orthodox Christian groups, the event didn’t go ahead. It was at this point that Zhenya started keeping a close watch on LGBT issues in Ukraine. In 2015, the first Pride event took place, with harassment from far-right groups resulting in injuries for many of those who took part.

“I wasn’t scared back then, but I did think: is this really worth it?” says Zhenya. “‘It’ll never work out here.’ But those were just thoughts. I became an activist later, when I met my boyfriend. He was already very involved in activism, and I found that inspiring.”

Activism in Bakhmut started after 2014. The war had destroyed some towns, but others were revitalised by an influx of people from the occupied territory. The Horlivka Institute for Foreign Languages moved to Bakhmut, and more informal groups sprang up around the city.

“I started to notice other people around who were different – even in the way they looked,” Zhenya recalls. “The institute’s relocation to Bakhmut really shook things up there.”

In 2019, Zhenya attended Pride in Kyiv as a security volunteer. This was one of the biggest marches ever, and according to the organisers’ calculations no fewer than 8,000 people took part. After Pride, Zhenya found out about Ukraine’s key LGBT organisations – Insight, Gender Z and KyivPride – and decided that Bakhmut needed one of its own. In the same year, Zhenya came out as non-binary (that is, a person with a non-specified gender identity).

Despite Donbas’s image as a conservative region with strong ‘Soviet principles’, the attitude towards gay people is more tolerant than elsewhere. In 2000, human rights activists at the Nash Mir centre carried out a survey in Donetsk and Luhansk regions; almost 15% of respondents to the survey openly described themselves as gay. This is one of the highest results to be been seen, with higher numbers found only in the south of the country. Human rights activists also noted that the population of Donbas showed both greater flexibility and indifference towards questions of religion; this means that conservative sentiment there is less pronounced than in the more religious Western Ukraine.

However, Donbas has always had close ties to Russia, and has seen a gradual influx of Russian homophobic attitudes to the region. In Luhansk in 2013, an ‘anti-gay parade’ was organised by Cossacks and Russian Orthodox activists. In Donbas there is also a branch of the Occupy-Paedophilia movement, founded by Russian neo-Nazi Maxim ‘Tesak’ Martsinkevich, in Donbas. ‘Tesak’ has himself visited Luhansk as part of a so-called ‘tour’ to make a series of film clips showing people the organisation alleges to be paedophiles being humiliated; in one of these, his victims turned out to be Arab students. Under-age followers of Martsinkevich have even featured on the local TV news, increasing awareness of the movement’s activities.

In 2014, at the start of the so-called ‘Russian Spring,’ soldiers and their supporters made active use of rhetoric about so-called ‘gay propaganda.’ This is still the case: recently, Russian propagandist and television presenter Olga Skabeyeva alleged that ‘gay battalions from the Ukrainian army’ would be sent into non-government controlled Donbas.

Zhenya says that there hasn’t been any antagonism towards the LGBT community in Bakhmut. In fact, no one in the town had ever even considered it or organised any related activities. But Zhenya says he could see there was an interest among the town’s young people. So he, along with other like-minded people, set up Donbas-Queer.

Donbas-Queer doesn’t have a physical office – the members meet in different locations. This might be what stops them being attacked by far-right and conservative opponents – the members can never be found in one particular place. Zhenya is optimistic, pointing out that there are no explicitly far-right organisations in Bakhmut. Nonetheless, for security reasons some details about the organisation and its members are not discussed openly.

Plans for the future

‘The very first event we held was my lecture about the history of the Pride movement,’ Zhenya tells me. ‘After that, we ran several seminars about queer arts. I know it’s a rather niche subject for a place like Bakhmut – maybe we shouldn’t even have started with it. But I work on the principle that you have to provide as much basic information as possible. That’s because not everyone knows as much about this as I do.’

In the winter of 2020, Donbas-Queer organised a protest march against gender-based violence. Naturally, the turn-out was quite low – about ten people came. ‘We led a procession across the ice, holding photographs and placards,’ Zhenya says. ‘We know this isn’t Kyiv, so we didn’t have the same numbers we would have got there. Even so, I’d done my preparation and informed the police about the march, although we weren’t attacked by anyone.’

Zhenya describes his favourite protest, which he calls ‘Burn the Patriarchy.’ ‘We made a figure out of cardboard and stuck a picture of the face of [Oleg] Vinnik to it.

We pulled it along by some string to the war memorial where we set fire to it. I think that was a mistake – some people were upset that we took it to the memorial, and I think we shouldn’t have done that. But on the whole, it was really good fun.’

Donbas-Queer has now teamed up with the organisation ‘KyivPride’ and prepared a series of events for September when they will mark Pride month. While it’s true that there won’t be a march – Zhenya believes that wouldn’t work in a town the size of Bakhmut– he is absolutely certain that LGBT organisations in Donbas can and must grow.

“There’s Kramatorsk, and the organisation ‘Platform TU’ in Mariupol. We want to work with all of them. I think we should also be looking at Konstantinovka, too – everyone thinks of it just as a staging post, but it’s got potential. I’ve found out that some of my old classmates are also LGBTQ+ – they really need to find other like-minded people to connect with. And it’s much harder to do that here than it is in Kyiv.”

Zhenya has now moved to Kyiv, but he still goes back to Bakhmut to work with Donbas-Queer. At the same time, he’s handing the management of the organisation over to local colleagues, because he can’t see the sense of telling others about the situation in Bakhmut when he’s living in Kyiv. However, what he really wants is for people to stay behind in Bakhmut to bring change there.