"Why Don’t You Wrap Those Thin Little Fingers of Yours Around My Dick?" Zaborona reports on how activists are fighting back against street harassment. - Заборона
Vulnerability 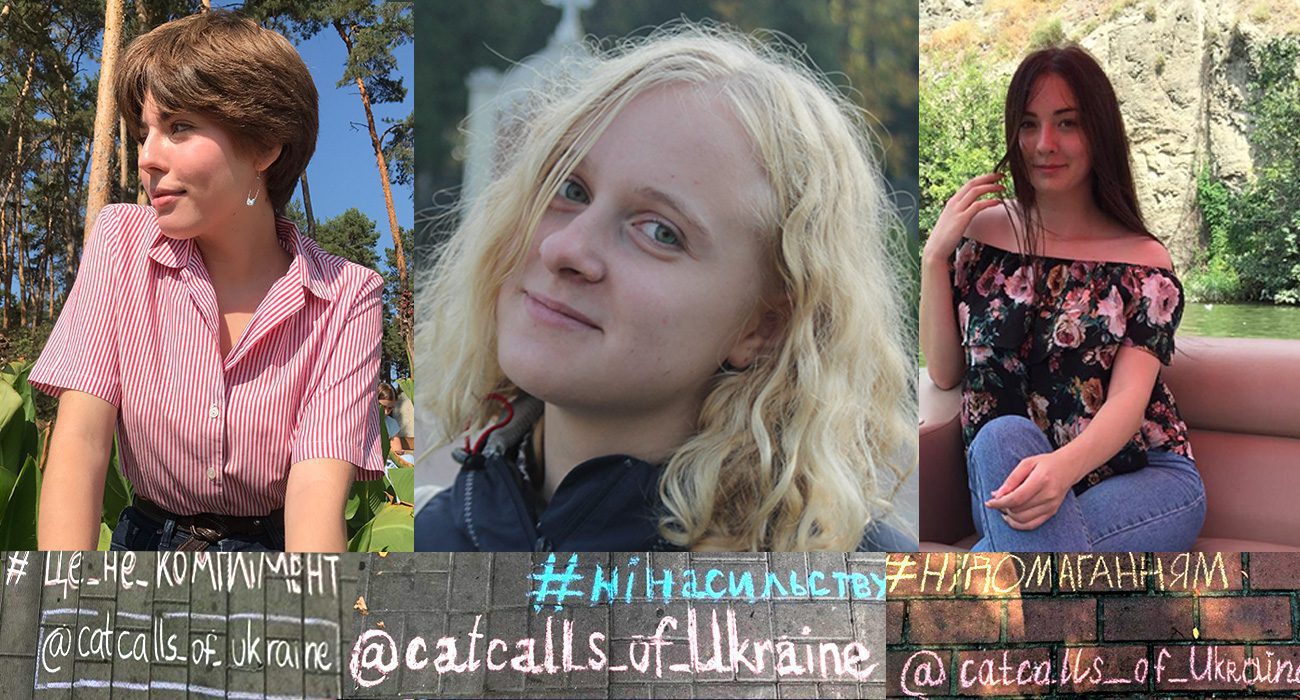 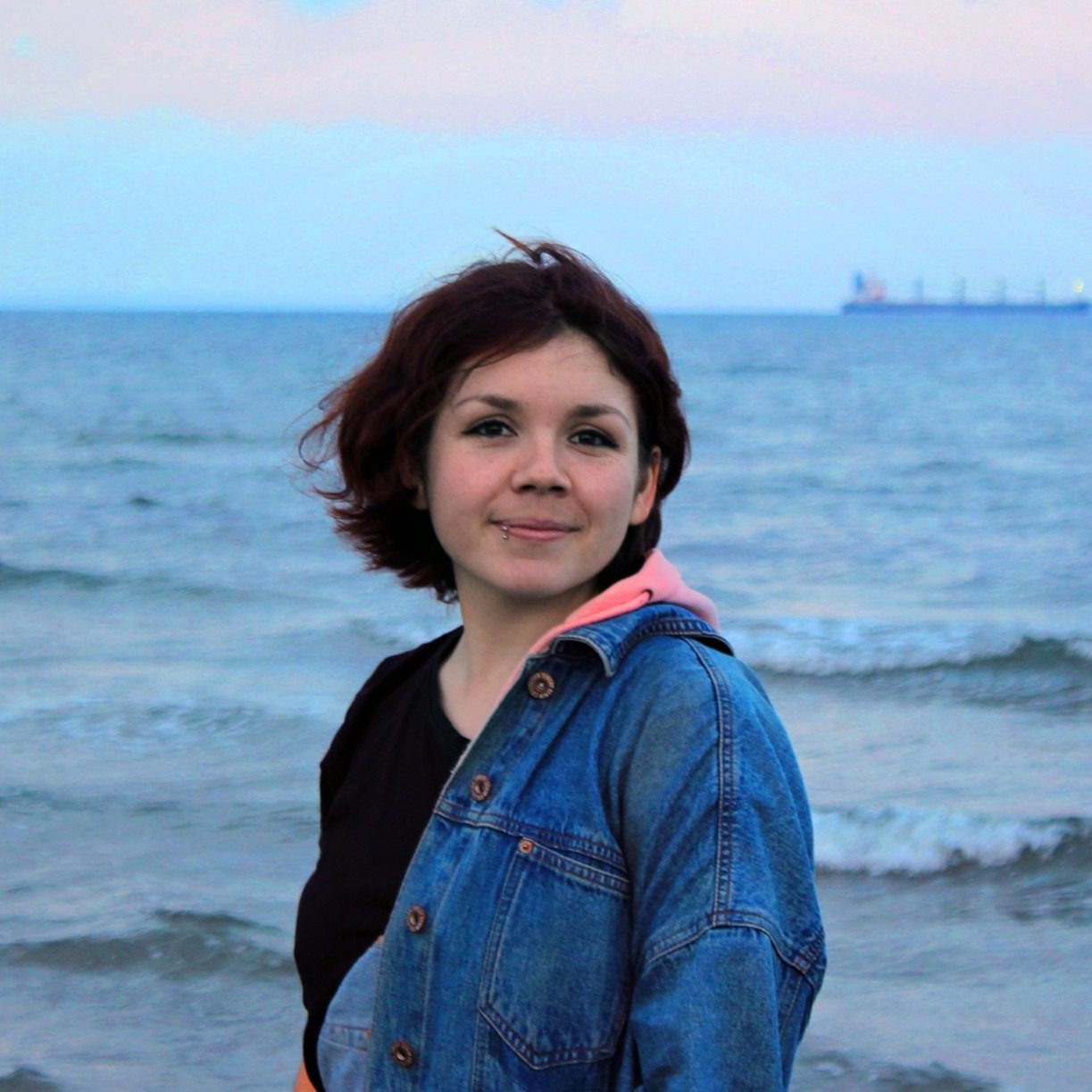 “Kss-kss-kss”, “Nice ass”, “Smile!” Such phrases are regularly shouted at women on the street in their everyday lives. This is catcalling, a form of street harassment that Ukrainian activists have decided to fight back against. To do this, they have joined the public initiative Catcalls of Ukraine and armed themselves with chalk. Zaborona editor Hanna Belovolchenko tells their stories, as well as why, in addition to verbal harassment, the girls had to touch on the topic of physical abuse.

The minibus that Maria takes to visit her grandmother that day is full. There are no seats. Everyone has to crowd into the bus. But the girl’s mood is still high. Today, she finally put on her dreamy pink corduroy pants, which she had been searching for with her mother for so long.

In the following years, the girl will face street harassment more than once, hearing men shout about how sexy she is, men honking from their cars. For the most part, Maria will be silent and feel guilty about how she looks and presents herself.

And in five years she will write in chalk on the asphalt at Constitution Square in Kharkiv: “I felt him crawling under my shorts. #NoHarassment”. This is not her story. She gave her story to others to write because she “didn’t want it to be triggering” and to fail the work. Today Maria Voziyanova is 19, she is studying to be a lawyer, and is an activist of the Catcalls of Ukraine initiative.

When chalk is a weapon

On September 5th, inscriptions on the asphalt with the hashtag #NoHarrassment began to appear in Kyiv, Kharkiv and Zaporizhia. This is the result of the Catcalls of Ukraine public initiative. Girls from different cities of Ukraine have joined forces to fight catcalling and street harassment. They say that chalk is their weapon.

“Catcalling is verbal harassment when men shout things like, ‘What a great ass!’ It is important to say that this is not the norm. If we refuse to tolerate offensive words, tolerance to physical harassment and direct violence will then automatically decrease,” said Polina Serhiyeva, co-founder of the initiative.

The movement against catcalling and street harassment was launched in New York in 2016. Since then, it has been joined by 150 activists from around the world. Sergieva found like-minded people at the youth women’s camp. “I wanted to do this for a long time, but something was constantly getting in the way. I also wondered whether this topic was relevant for Ukrainians. We have a lot of more serious problems, so I thought they would say, “How are you suffering? Do something more important! ” But the idea was supported by many girls, and in three weeks we already had branches in several cities,” said the activist.

The girls noticed the relevance of the topic when they were collecting stories from their acquaintances before the launch. They had sent a Google form through which anyone could share their stories about being catcalled. Half a hundred answers were collected. When the form was posted on the official Instagram page of Catcalls of Ukraine, stories started pouring in almost every day.

Activists reread each story. Some send a short phrase that can be immediately transferred to the asphalt. Some people share their memories. Then the girls single out an apt phrase and write it. Sometimes the drawings are helped by volunteers, whom each activist can attract in their city, or they can join themselves by filling out an application.

When the inscription is ready, it is photographed and posted on Instagram. And with it – the whole story sent by the author.

12-year-old Ira Plitus was riding in a bus when she felt someone put her hand down the back of her pants. The girl was disgusted, and her body and brain simply shut down. People gradually got off the bus, some free space opened up, but she still stood in a stupor and fear. Ira did not tell anyone about it, but after the incident she called her parents more than once and asked to pick her up from school, because it was scary to take the bus again.

Today Ira is 19, she studies journalism and is an activist of Catcalls of Ukraine in Ivano-Frankivsk. The girl says that verbal harassment, which sometimes turns into physical, traumatizes a person. It is difficult and painful to talk about it, but it is impossible to keep silent, otherwise “evil will not be eradicated.”

According to the original plan, Catcalls of Ukraine was to focus only on catcalling, i.e. verbal harassment. “It’s something you can talk about without hurting anyone,” explains Polina Sergieva. However, with each new story that came through the Google form, it became clear that the focus of the initiative had to be shifted.

“It seemed to me that people were distinguishing between catcalling and street violence. When they shout “Nice ass!” and slap your buttocks – it’s two different things. But many people have written to us about physical harassment. I think this is because words are not traumatic for them. The pain threshold has risen so much that when something is shouted at you, you think, ‘Oh, well, thank you for not beating me.’ This is very sad, because violent words should be as unacceptable as violent actions,” the activist explains.

In the end, the girls decided not to keep silent about the stories which they hadn’t planned to publish. After all, according to Sergiyeva, “every experience is unique and must be heard.”

“You don’t have to come from Donetsk and build your own order here.” Polina received this message before the launch of the initiative, when she was just collecting stories. The words were complemented by a photo from her social network, which read: “Object”.

When Maria Voziyanova and the volunteers wrote in Kharkiv: “I refused him, he followed me home,” they decided to stop three men. They approached in silence, read and began to erase the inscription with their feet. Perhaps they wanted to show that they justify the actions of the perpetrators, Maria suggests. “But the fact that there is such a reaction means that what we are doing is timely and necessary,” she said.

Ira, after joining the initiative, learned that “it’s just femme frenzy”, “don’t think about men’s feelings”, and catcalling is really just a form of flirtation. Such messages were sent to her on social networks. “It’s not flirtation, as some believe. In general, it is difficult to imagine a situation where someone shouts at you: ‘What a great ass!’, and you approach them and reply: ‘Oh, how nice! Shall we meet?’ she says.

The fact that some people will not accept their initiative was expected, activists say, because in Ukraine there are quite strong patriarchal traditions that remain so under the influence of Christianity. Because of this, a woman is still considered an object, and society does not perceive much as violence, ignoring the fact that words can affect mental health, let alone actions.

In order not to run into offenders, activists and volunteers try to draw inscriptions as quickly as possible – usually a phrase two to three meters long appears on the asphalt in 15-20 minutes, says Maria.

“We do them in places where a lot of people pass to get the most attention. So the phrases disappear more quickly, but then again, we didn’t plan for them to last longer than two days. It is not necessary, because we will post the photo on Instagram, and soon we will make a new inscription in another place so that even more people will learn about the initiative and think about the problem,” the girl explains.

It’s not shameful to speak up

“Why don’t you wrap those thin little fingers of yours around my dick?,” “Are you wearing any panties?”, “Does the lady want to pay with a kiss?” Among these stories written on the asphalt, there is no story from Polina, although she herself has faced catcalling and harassment more than once. Yes, it’s a bad experience, says the girl, but it’s already “far in the past.” “Although there were two stories that triggered me. The first: ‘I was touched inappropriately by a pediatrician, and no one believed it.’ Then I thought: yes, very familiar, it was unpleasant. The second is how someone on public transport would grope them from behind. But then everything somehow went numb. I don’t know if it’s good or bad, “says Serhiyeva. For her, this project is not so much about pain and experience, but about the positive.

“The girls are inspired to do it, we are doing something important, so I’m still enthusiastic,” she explains.

Ira says that she sometimes can’t sleep for days after reading stories from the Google form. However, the girl is not going to stop, because if the problem is simply ignored, it will not disappear. The activist is convinced that it needs to be shown.

The girls plan to spread the initiative to every city of Ukraine, even a small one. After all, in small settlements, Maria says, girls and women can claim their rights even less, saying that they are uncomfortable, that their borders have been violated.

“Girls often write that the stories reminded them of their own, but they did not understand before that it is not a shame to talk about it. We can’t force other people to do something. But the more girls talk about catcalling and physical harassment, the less frequent it will be, ”says Maria.

Baggy clothes and no punishment

Women who have experienced catcalling and physical street harassment say they feel ashamed. Some suffer from depression afterwards, and some have low self-esteem. Almost 50% of women said that after they experienced this, they started wearing baggy clothes, reduced outdoor activities and tried to leave the house less often.

In Ukraine, the concept of “sexual harassment” is interpreted in the Law “On Ensuring Equal Rights and Opportunities for Women and Men” as “acts of a sexual nature, expressed verbally or physically”. Theoretically, says lawyer Halyna Fedkovych, you can get compensation in civil proceedings. The main thing is to gather evidence. But in fact in Ukraine it is very difficult to prove sexual harassment, says the representative of the organization “La Strada” Anna Saenko. This is due to the fact that the victims do not report the perpetrators, the fact that it is difficult to gather evidence, find witnesses, and so on.

In France, from 2018, catcalling and other forms of street harassment are punishable by a fine: from 90 to 750 euros. Prior to that, such actions went unpunished, but according to French Secretary of State for Gender Equality Marlene Schiapp, liability is a “deterrent.” The same punishment can be obtained in the United States, the form of which depends on the specific state.