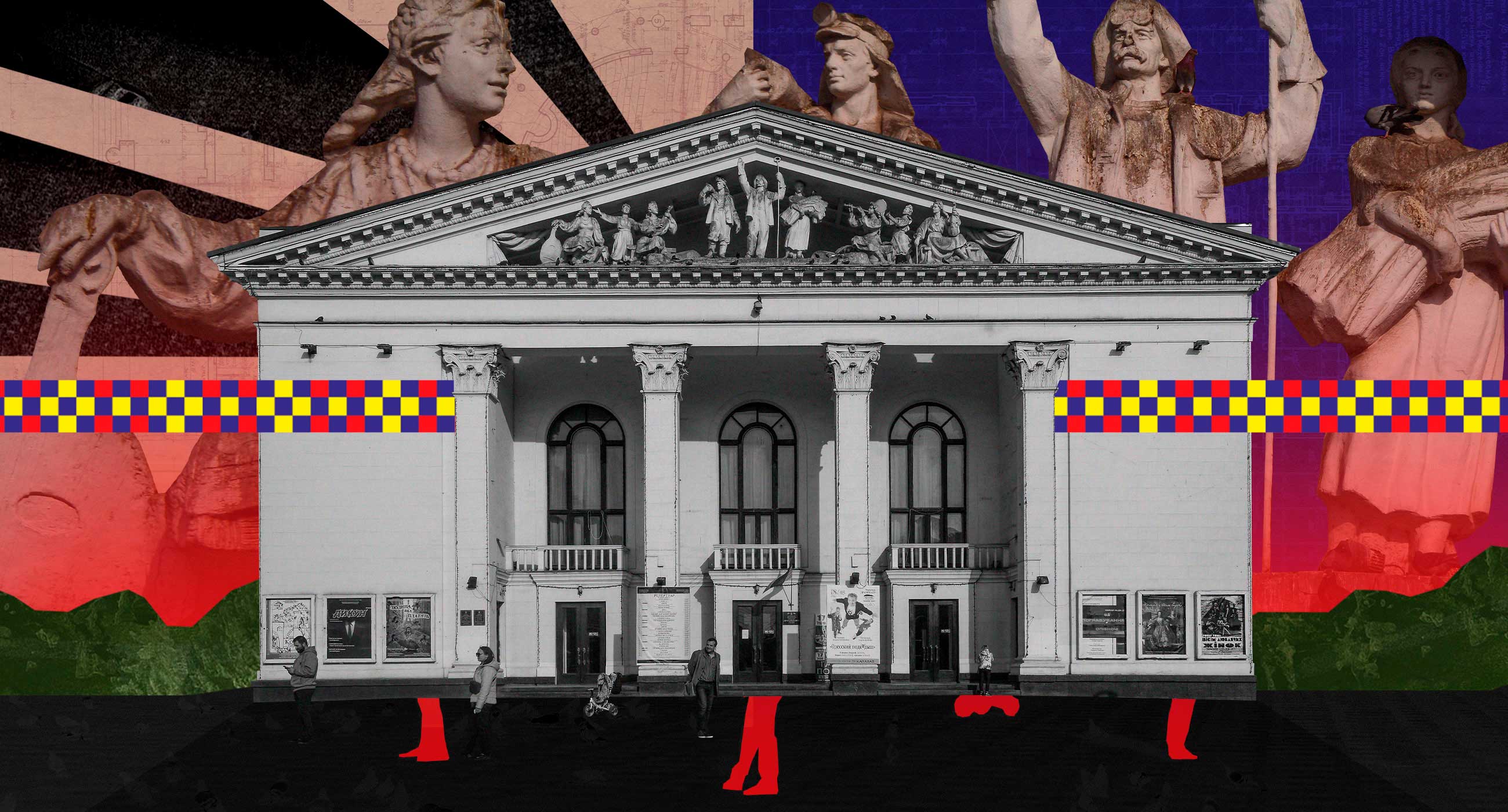 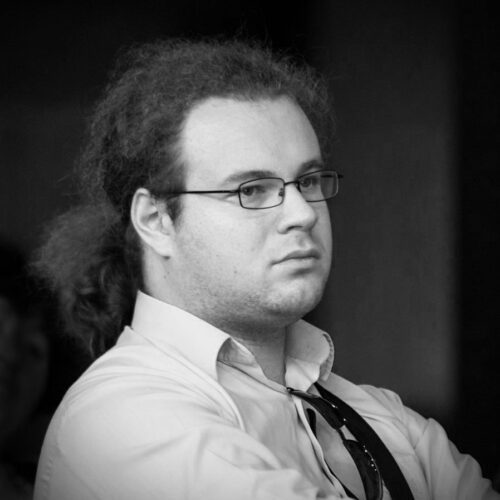 Before the Russian invasion of Ukraine, the Mariupol Drama Theater was the focal point of the city, uniting the residents. On March 16, after the Russians dropped a bomb on the theater, it turned into a mass garve for hundreds of people. Before the full-scale war, architectural historian Semen Shyrochyn had been contributing to Zaborona about the urban riches of industrial cities, including Mariupol, which at that time had not yet survived the siege and massive destruction. Now, as part of a special project about the Mariupol tragedy of March 16,  Shyrochyn is exploring the architectural heritage of the theater and what remained of it after the bombing.

Zaborona and the Center for Spatial Technologies are looking for your testimonies about the bombing of the Mariupol Drama Theater. Read here on how you can help the investigation

History of space: from church and cemetery to square and theatre

There was a hill in the center of Mariupol, and on its top was a square. But for a long time, it remained unbuilt-up – it had been conceived as a recreation area for city residents. At different times it was called Oleksandrivska Square, Freedom Square, Central Square, Theatre Square, etc.

In 1862, the future Church of Mary Magdalene was laid on this place. However, soon the construction had stopped and were resumed only in 1888. The City Duma took into account the emergence of the railway and the new seaport, the growth of the city population, and the need for religious services and had decided to allocate 2000 rubles annually for the construction of the temple, starting in 1889. In October 1897, the church was consecrated and in 1934 it was destroyed as part of the “godless five-year plan” when the persecution of the church began with renewed vigor in the USSR. The square where the destroyed church stood was turned into a square with a fountain. As a result of excavations in 2018, a fragment of the church foundation was opened for demonstration.

In addition to the square, this space was also used as a burial place. There was a small cemetery at the Magdalene Church. In 1920, Red Army soldiers who died in battles with the Denikinites were buried here in a mass grave. In 1941-1943, the German occupiers buried Wehrmacht soldiers here – this is how the whole cemetery with 16 rows of first wooden and then cast iron crosses (160 graves) appeared. After the expulsion of the occupiers, the cemetery was destroyed by the order of the authorities. In autumn 2017, the remains were exhumed in Mariupol and reburied at the German military cemetery in Kharkiv.

The revival of the park began in the 1950s. A round trade pavilion was built on the site of the Magdalene Church, where they sold mineral water, ice cream, cakes, cigarettes, and Zhiguli beer from a local brewery. But later it was decided to build a theater in the square.

The construction of the Mariupol Drama Theater cost 14 million rubles. According to the project, the theater has two stages: a large one for 800 seats and a small one for 70. The institution was solemnly opened on November 2, 1960, the first performance presented on its stage was “Irkutsk Story” based on the play by Oleksiy Arbuzov.

The Mariupol theater, in particular, differs from other theaters built according to a typical project by its dominant urban planning location – as a rule, theaters were located in squares or along large avenues, while here it stood on the axis of the avenue and in the middle of the square, which defines the shape of the square – there was no such thing anywhere else. In addition, the main facade was significantly redesigned, it was given a unique sculptural composition in the tympanum of the pediment. In 1955, the USSR authorities issued a decree on the fight against excesses in construction, which was supposed to reduce the cost of the process, in particular through the rejection of decorations and savings on building materials. But the drama theater in Mariupol, even taking into account legislative innovations, received more expressive detailing than its Poltava prototype.

From the urban planning and compositional point of view, the location for the construction of the theater was chosen as exclusively dominant. The theater is located on the main axis of the city on the Freedom Avenue and is surrounded by a square on three sides. It is noteworthy that this place was occupied by the theater, and not by a government building such as the city council or the city executive committee. The volume of the theater is also accentuated by the bend of Kuindzhi Street, which passes through the square.

A small arch had been built in front of the entrance to the theater, but it was dismantled 2-3 years after the theater was completed. The arch covered the pediment of the building and did not fit into the overall composition of the architectural ensemble.

Structurally, the theater consists of two rectangular volumes [ledges]: the smaller one is the entrance area and the area for spectators, the larger one is the stage part and administrative and amenity rooms. The volume of the stage box rises above the total volume of the theater and is decorated with a crowning cornice, a lantern, and arcature [parapet decor in the form of a ribbon of small blind arches].

The main facade has a portico of four rectangular columns of composite order. Above it is a pediment with a developed sculptural group. The portico is deepened into the background of the facade and forms a loggia, on the second floor of which there are balconies with a balustrade. You can get to them from the foyer of the second floor.

A similar four-column portico with a pediment had another temple of Mariupol destroyed in the 1930s – the Kharlampievsky Cathedral, located on the same axis with the theater, down the avenue. In its place, the building of the DOSAAF (Voluntary Society for Assistance to the Army, Aviation, and Navy of the USSR), destroyed during the hostilities in 2022, was erected.

Since the drama theater is located in the middle of the square, its rear facade, which in normal urban planning conditions could be oriented towards the courtyard, overlooks the open space and crowns the prospect of the avenue. Because of this, its spatial role is almost the same as that of the main facade.

The rear facade has a risalit, which also has a four-column portico, but here it is deepened only by the thickness of the columns. The pediment has an arched window opening and two small windows. In the five niches formed by the columns, there are rectangular window openings on three floors, paired with a common window cornice. The rear entrance on a high plinth in the center of the portico has a grand staircase with a balustrade and street lamps. In two symmetrical risalits there are exits of evacuation stairs.

The rhythm of the side facades is set by 20 pilasters three stories high. Rectangular window openings are decorated with window sill cornices, and the volume of the stage part is decorated with arched portals two stories high. All facades are faced with limestone slabs, the plinth is faced with dark brown granite. The structure is crowned by a high cornice with denticles along the perimeter, which turns into an entablature on the portals.

The interior of the theater, despite its construction in 5 years after the beginning of the struggle against excesses, had an exquisite design. Large columns of square cross-section were used in the foyer, along the perimeter of the walls there is a number of decorative medallions on theatrical themes.

The most luxurious decoration was given to the auditorium. On the railing of the balconies, the ceiling, and on the frame of the letter and decorative boxes there is a decorative molding with Ukrainian baroque ornament motifs. At the height of the third floor of the hall walls, there are decorated canneled pilasters.

The staircases are made of colored concrete with admixtures of marble chips. The floor of the foyer and around the auditorium on the 1-3 floors is covered with wooden parquet. The interior of the theater has preserved original chandeliers, spotlights, and wall lamps.

The value of the theater

On December 28, 1983, the Donetsk Academic Regional Drama Theater in Mariupol received the status of an architectural monument. There were several reasons for this decision.

Firstly, the theater building influenced the development of architecture and urban planning of Mariupol, it is the dominant building in the city center and is harmoniously connected with it. Architectural and artistic solutions are monumentally expressive, which distinguishes the theater from other buildings of that period.

Secondly, the theater represents Soviet neoclassicism and classical principles of city development. The authors of the project were famous Ukrainian architects whose objects were built all over Ukraine. Even though a typical project was reused in Mariupol, the built theater received individual features, moreover, the reuse of the project does not reduce its quality, but rather emphasizes that the project is successful. In addition, the monumental composition in the tympanum of the pediment has artistic value, originality of the solution of compositional and creative ideas, and is executed with skill.

Thirdly, the activity of the drama theater influenced the development of culture and art in Mariupol. People’s Artist of the Ukrainian SSR Oleksandr Uteganov worked here during 1968-1986, under his leadership, Mariupol theater became one of the best in Ukraine.

Another criterion was the degree of preservation lost due to the bombing. Until 2022, the building of the theater had been untouched, it retained its shape, wall cladding, decoration of facades and interiors, parameters of premises, structures, material and style of entrances, floor pattern and material, lighting fixtures, etc. Much of this was destroyed or damaged by the explosion on March 16, 2022. But, for example, three wooden doors of the entrance group of the main facade, made in the neoclassical style of the 1950s, turned out to be strong enough — they still exist in the photos after the explosion.

At the end of August 2022, the adviser to the mayor of Mariupol Petro Andriushchenko made a statement that “the drama theater has neither historical nor architectural value, like all typical buildings of the Soviet period”. Although Mariupol Drama Theatre was registered as an architectural monument almost 40 years ago.

During the full-scale war, many Ukrainian officials allow themselves to make similar statements: for example, the head of the Kharkiv Regional State Administration Oleh Sinehubov spoke about the impossibility of rebuilding the Kharkiv Regional Administration, although it is an architectural monument and, according to representatives of the architectural community, is subject to restoration. A similar situation was after the missile attack on the center of Vinnytsia when the head of the Vinnytsia Regional State Administration Serhiy Borzov initially announced plans to demolish the damaged Officers’ House, which is also an architectural monument and can also be restored. But later the official changed his mind and said that the Officers’ House has become a symbol of Vinnytsia’s resilience.

The issue of cultural heritage always causes controversy when it comes to the reconstruction or demolition of a historic building. However, this is a dangerous and destructive practice. Partial loss of authenticity should not cause doubts about the status of an architectural monument. Moreover, the status of a monument imposes additional obligations to rebuild the building in an authentic form. There are precedents in the world for the restoration of even UNESCO sites destroyed by military operations: for example, the Old Bridge in Mostar (Bosnia and Herzegovina), destroyed in 1993 during the Croatian-Bosnian war, was restored in 2003-2004.