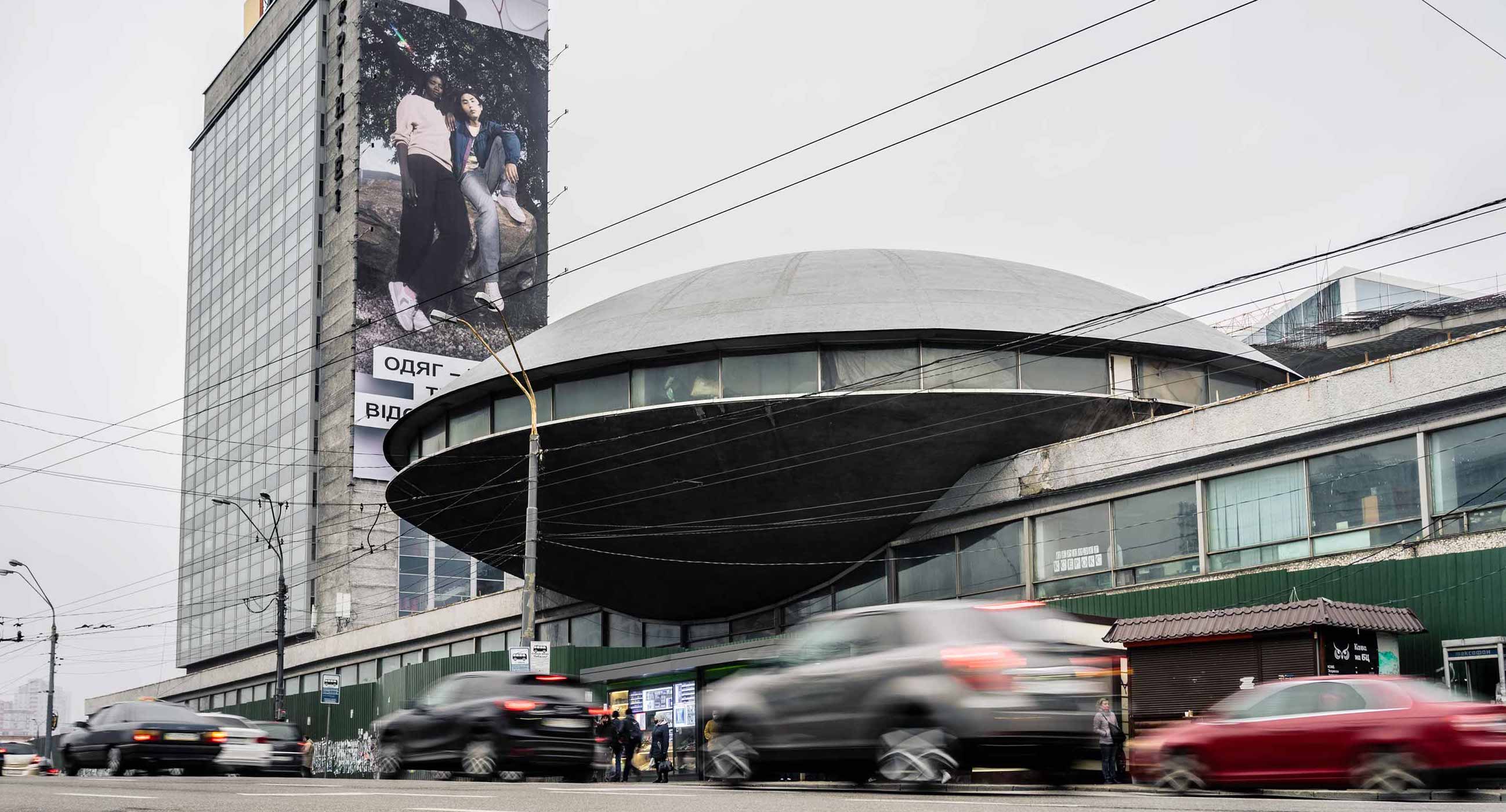 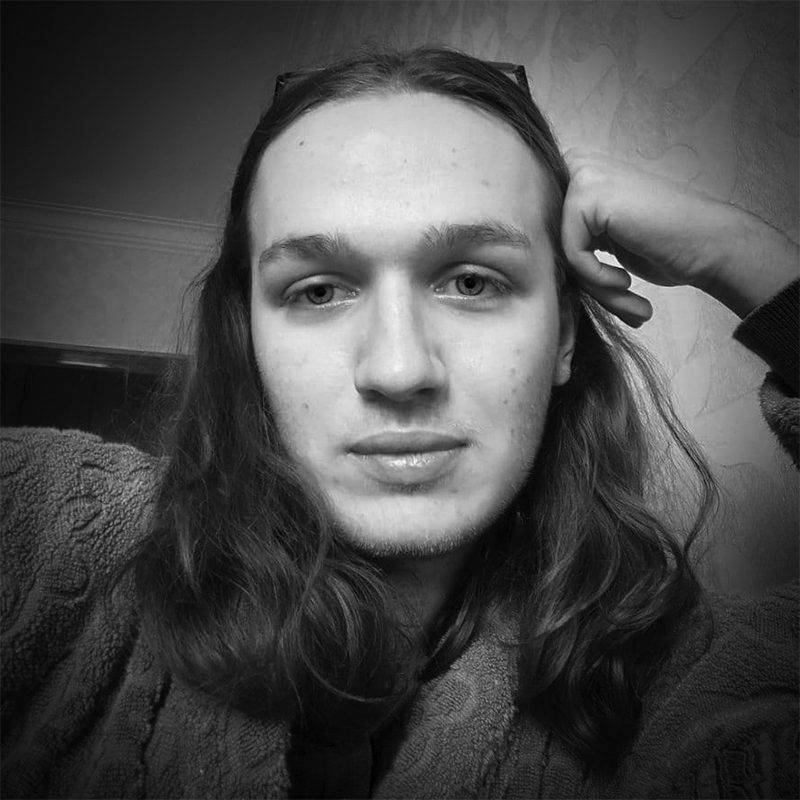 Not long ago, one of the developers planning to remodel the “Children’s World” mall in Darnytsya, a neighborhood on the left bank of Kyiv, presented a plan to convert it into a standard shopping center. Activists and architects are now negotiating with the developer to come up with a compromise. In former Soviet countries, public spaces are constantly being swallowed up by entertainment and shopping centers and commercial buildings. Exclusively for Zaborona, critic Oleksiy Kuchanskiy writes about the “Saucer” by the Lybidska metro station in Kyiv as an important phenomenon through which one can find the answers to many complex questions.

The vast majority of facades in Kyiv can be used for advertising entirely legally. However, the vast majority of advertising in the city is installed illegally. Looking at official data alone, 18,349 advertisements are authorized, while 64,538 are not. Likewise, advertisements are breaking up publicly available films, lectures, and discussions on YouTube, and they are sneaking into magazines. Behind the total dispersion and smearing of the Earth’s resources, the exploitation of low-paid and unpaid (particularly domestic, usually female) labor, the privatization of public space, and the destruction of cultural developments of the past, there is simply a hidden exchange of goods.

Researcher, filmmaker and essayist Hito Steyerl encourages us to pay attention to the ancient Greek concept of “stasis” as restored by philosopher Giorgio Agamben, in which, in her opinion, there is great potential for explaining modern cultural processes. In the ancient Greek sense, stasis is a word that simultaneously denotes both civil war and permanence (hence “static”). Stasis suggests something that is extremely dynamic and surprisingly stable at the same time. When there is stasis, conflicts are not a solution to confrontation, but a way of keeping it sustained. It is a permanent confrontation that conserves the present state of things. Inherent in stasis is also an open border between the private and the public, where the public is constantly seized by force and the private pretends to become a new social value.

In this new sense, the concept of stasis makes it possible to explain both geopolitical processes (especially commodity-inspired wars in which private interests become disguised as “national” ones with the help of propaganda tools) and micro-processes, from the activities of private modern art museums to the privatization of the public space. It does not take long to find examples in Ukraine. A very telling, although entirely micro-scale, embodiment of this idea is the illegally installed banner on the wall near the Ukrainian Institute of Scientific and Technical Expertise and Information, also known as the “Saucer,” on Lybidska Square. According to the statements of the relevant authorities, the building was supposed to be demolished back in 2017; however, despite its status, the eventual regulations, and the norms that existed before its installation, this giant piece of fabric continues to hang on the wall, asserting with its presence alone that “this is how it’s done.”

A much more notable example of dynamic stability at the expense of public space is the Ocean Plaza Shopping Mall, which is completely covered in illegal advertising. At the initiative of Ukrainian oligarch Vahif Aliyev, Lybidska Square continues to be seized today: the enormous Ocean Mall is being financed by Aliyev. To the list of occupation of the city’s physical space, the expansion onto the time and attention of Kyiv residents, and damage to the environment can be added the encroachment on one of the most striking examples of Soviet architectural modernism — the “Saucer,” which will serve as an entrance to a new section of the shopping mall as conceived by the developers. The rhetoric of those representing Aliyev’s interests has revolved around the public benefit of the new space and its importance for the city: the public interest, which in this case will be harmed, has been falsified as “the interests of the city residents.”

The privatization of the public, the rhetoric about the urgent necessity of the private, and the conservation of the present state of affairs: this is a stasis scenario played out. But is a future even possible with tragicomedies such as these? This is by no means a rhetorical moralizing question through which the reader is expected to comprehend his public duty (it seems that this genre is somewhat outdated). Can we imagine what kind of world awaits us in a hundred years? This is an extremely strange question in an ocean of spam delineated by significantly shorter time intervals, but it is still important.

Today, the “Saucer” is one of the most interesting answers to that question. Despite the threat of exoticizing the Soviet cultural legacy, it is still important to appeal to that legacy after clarifying the conditions under which such an appeal is possible. The building was constructed as the project of Florian Yuriev and Lev Novykov in 1971. Since then, it has been the home of the Ukrainian Institute of Scientific and Technical Expertise and Information. To solve the issue of narrow construction space, the architects “suspended” a significant segment of the structure, the supporting elements of which are hidden underground. One of the most recognizable parts of the building also has to do with that solution — the cinema hall, which looks like a flying saucer from the street. Initially, the hall was supposed to be a light organ theater, but the plan was not implemented, not least because of administrative decisions.

This (conceived, though not realized) theater is related in the most direct way to the practical research of the color of sound, which Florian Yuriev has been engaged in for several decades. The screen in the hall would have been used for projecting films and light organ performances, and the shape of the structure would have enabled waves of colored light to dance around the space. The spherical ceiling generates resonant acoustics, allowing the sound to reach all 500 audience members equally well. The “Saucer” is not a metaphorical, but an entirely physical manifestation of research into the color of sound: the shape of the building contributes to the play and overlapping of sound waves and waves of colored light. The idea of the Cosmos relates precisely to this plan.

The shape of the “Saucer” stems from massive interest in post-war Soviet culture toward outer space and the then popular narrative about space colonization as mankind’s highest achievement. This interpretation, although difficult to argue against, is still hardly sufficient. From Florian Yuriev’s justification of his own color painting system, it becomes clear that for an artist, the Cosmos is not just a space beyond Earth’s boundaries.

In the second volume of his work The Harmony of Spheres, the inventor of color painting writes about the Cosmos as a mythological category in world religions: as a “secret” that can be discovered by the artist. In short, Yuriev writes about the Cosmos as something close to the universe — as a world organized in a certain way. The Cosmos is a “map” of the world, a territory for the existence of a creative product that Florian Yuriev has been working on for almost his entire life and that cannot be separated from that life.

Apparently, the “Saucer” is an embodiment of both of these understandings of “Cosmos,” while color painting is one of the cosmic principles studied by the artist that became possible thanks in no small part to the scientific and technological achievements of the “Space Age.” Developments related to the color of sound are, among other things, the proposal to pay attention to the materiality of thought and sign systems, as well as to describe communication as a physical, cognitive, and mental process at the same time. This attention to hybrid, cross-cutting concepts (Florian Yuriev uses the term “synthesis” in such cases) enables an alternative experimental system of corporeality or at least corporeal practices: will we feel our bodies the same way as we do now if color painting is integrated into school textbooks, principles of urban development, messengers?

The Soviet artist’s presentation of the Cosmos as a universe where color, feelings, and meanings flow into one another seems very relevant today when it is nice to think of the Cosmos as an unlimited scrap heap of resources that mankind can “move” to after the ecosystem collapse that they created on Earth. One wants to dream about a world in which a future “harmony of spheres” will have the chance to become envisaged alongside other cosmos and similar projects of cultural creativity — even if the finances of oligarchs are not behind them. In the end, isn’t culture woven from “cosmos” like these? Just like the “Saucer,” most of the objects and images of everyday life are traces of someone’s “worlds.”

Memory is often one of the most important topics in conversations about the future. The efforts of the architect and activists that defended the preservation of the building’s original design were critical for the fate of the “Saucer.” Today the UISTEI building is included in a register of monuments of architecture and monumental art, so the threat to the structure is not as dire as it was before. The building’s new status is the result of prolonged work by activists, including the architect himself, who publicly defended it. It is the result of memory activism.

This strange phrase, “memory activism,” is intended to indicate the non-transparency and non-automaticity of cultural heredity. Although memory is also experienced as an involuntary, unencumbered process in everyday life, in culture it is always the result of painstaking activity and has its own material incarnations: books, buildings, films, stories, and even language. All these incarnations must be prepared and created by someone—hence the conversation about activism.

In the case of defending the “Saucer,” activism developed in the manner of architectural work between art and “the street” — direct activist action, which today largely exists within the media. Here are some examples of what was done: various public events; publicity campaigns about the issue on social media and participation in press briefings for the #savekyivmodernism initiative; events organized by the Center for Visual Culture (including an international biannual event called the “Kyiv International”); an alternative restoration project; and merch with illustrations of Kyiv “Yes-style” architectural modernism, which seems to have been quite effective in popularizing the issue.

The documentary “Façade Color: Blue” directed by Oleksiy Radynski, which will soon be supplemented by a full-length film under the working title “Florian’s Witnesses” that is now in the final stages of production, also played a critical role.

These indications of culture-preservation activism reveal a lot about how cultural memory can be understood in this sense. It seems that documentary cinema is the perfect model for memory of this kind: the material for the film is events recorded on video, which by and large would have taken place even without the film, but the cinematography, editing, directing, and production of the film create an independent work, or a cultural object, from these recordings; most likely, the film itself will eventually require such a “recollection.” As the American avant-garde film director of Ukrainian origin Maya Deren aptly said, to make something new, you need to put it together from what you have.

Memory activism is not just preservation, and it is not just resistance to the destruction of the past. This activism is the active creativity of societies and communities, means of resistance, posters and GIFs, scientific and artistic texts, T-shirts and sweatshirts, journalistic reports, and cinematography.

In this sense, memory is creativity. Memory is symbiosis, a dialogue between history and modernity. The past, and with it the cultural heritage for memory activism, is neither a liability nor something to be avenged, but a constellation of futures that can be envisaged. But a significant segment of the Soviet cultural heritage still needs to be “remembered” and “memorized”: in particular, the Children’s World mall in Darnytsya. And not just that: even on the “Saucer,” there are still several square meters of legal advertising space — “several square meters of the future for your logo.”