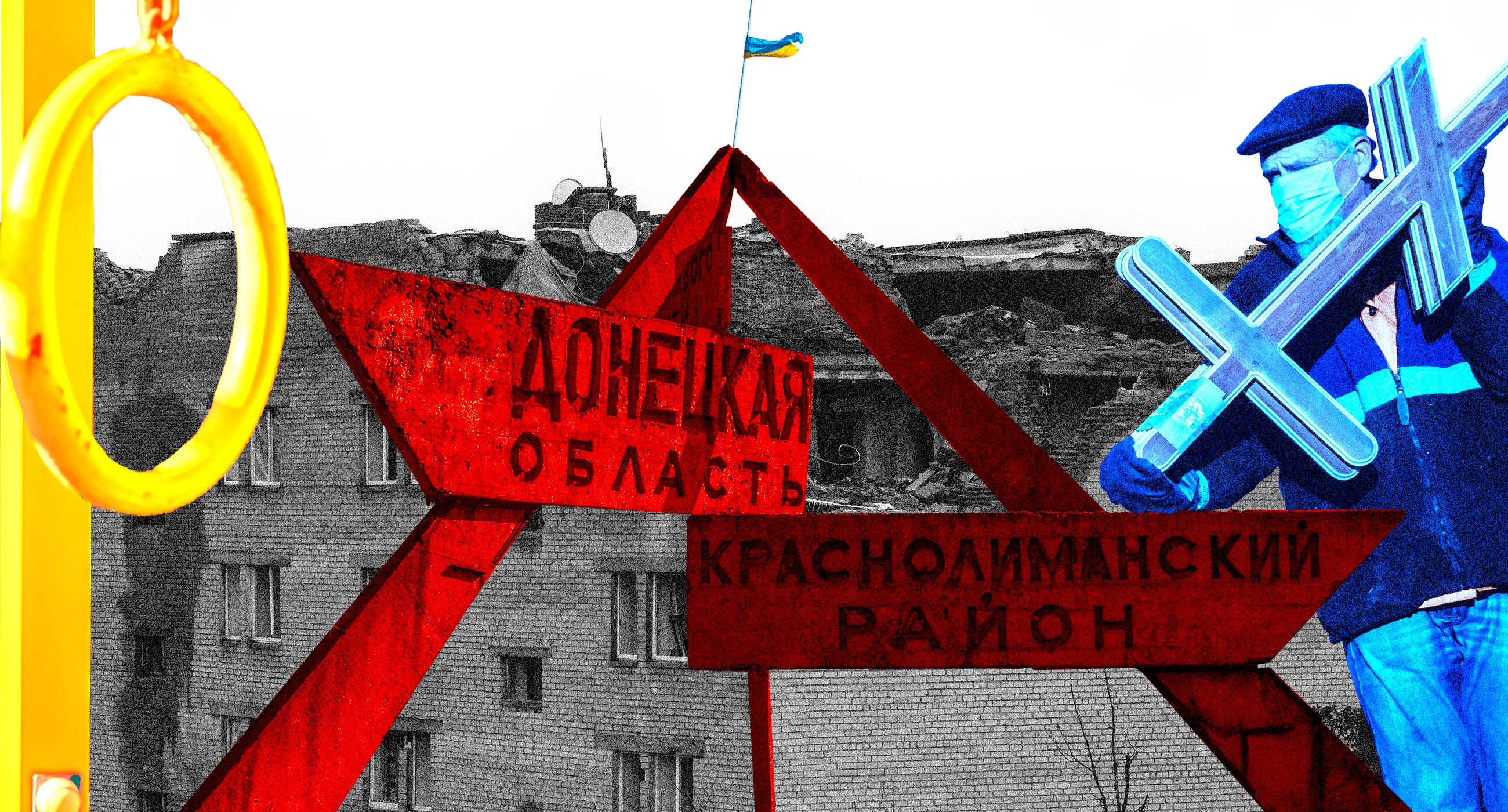 The war in Donbas has been going on for more than 8 years, and today, during a full-scale invasion, the local population is experiencing a new — previously unknown — round of destruction and tragedies. For Zaborona journalist Polina Vernyhor, the first business trip to the east of Ukraine was supposed to be an important stage in her professional career, but it turned out to be a difficult physical and moral test. We publish the diary of her two-day trip, full of reflections, impressions of various kinds and questions, the answers to which are not so easy to find.

For half a year I dreamed of going to Donbas. When I was asked why I needed to go there, the question stumped me. Apart from research goals and professional duty, there seemed to be something else. I thought about it for a few days and decided that I expected this experience to change me. However, I could not answer how exactly.

I planned the trip back in June. A routine problem for a journalist without a car is transport. I found volunteers who agreed to take me to Severodonetsk, Kramatorsk, and Lyman. Other technical inconveniences — there was no free cameraman, but I found a freelancer who agreed to shoot almost for free. When the planning of my business trip was completed, the editorial office decided to cancel it under, frankly speaking, a banal pretext. Later I realized that it was an excuse. The editors understood that I was not ready yet.

In June, I told a random tinder-match about my intention to take a business trip to the frontline zone. He called for a date, and I was planning a trip and was about to leave — the meeting did not happen. A month and a half after the editorial refusal, I posted a photo from my vacation on Instagram. This guy wrote: “Donbas is in the other direction”. It hurt me a lot. I think I deserved to rest, but the guilt whispered: “There is a war in the country, you have to go there”.

So, my team and I went to the Kharkiv region. It was the second business trip to the war zone in my life. The decision to go to Lyman for exhumation appeared when we were already on the road from Kyiv to Kharkiv. It took two days to obtain the necessary permits, and we spent most of this time in the de-occupied territories almost without communication.

Google Maps shows that it takes about three hours to drive from Kharkiv to Lyman. However, in fact, we were on the road for more than four hours — in many places bridges were blown up, and numerous sections of the road were blocked due to mines.

We pass bombed factories, oil depots, farms, villages where no one lives anymore. A huge yellow and blue flag hangs on one of these dilapidated huts. “Apparently, the military live here,” says our photographer Pavlo.

Lyman looks like a typical de-occupied city: a minimum of residents, as well as surviving windows in buildings, stones from destroyed houses are scattered everywhere. We decide to go to the police station and meet an elderly man there. He left Yampil, near Lyman, because a Russian missile hit his house twice. The second missile hit the basement where his wife was hiding.

We are filming an interview with him, but to edit the video we need footage from Yampil itself. The police refuse to let us go — heavy shelling continues in the village and it is very dangerous to work there.

Then we go to the Ukrposhta branch, which, according to the military, works as a local administration. It turns out that there is no such administration in Lyman yet. We were sent to the post office because there is just a crowd of people there. These are local residents who came to receive social benefits for residents of the liberated territories.

People in the crowd are quarreling. Someone pretends not to understand Ukrainian when I try to ask them questions, someone behaves aggressively. “Banderites! You came here with your Banderstadt! We were doing well until Ukraine liberated us!” shouts a drunk man in his 40s.

Another woman is worried and does not want to be filmed. “So you came to show how bad we are here in Lyman!” she exclaims. I explain that we want to show real life. She waves her hand and turns away.

The next stop is a cemetery. This is my first (but because of my profession, I think, not the last) visit to a mass grave. Just beyond the Lyman, the Ukrainian military found several collective graves — a total of 166 bodies: civilians, military, women, men, and children. We arrived too late: the exhumation had already finished. Near the excavated graves there are bodies in black bags with tags. They say “unknown man”, “unknown woman” and indicate the probable date of death.

The air is full of the characteristic stench of decomposing human bodies — in literature or reports it is usually written that it is a sweetish smell reminiscent of overripe fruit, but it is more like very spoiled beef or pork. About a hundred meters from the burial site there is a truck from which wooden coffins are being taken out. A dozen men in protective masks are laying the coffins on the ground. They put bags with bodies in them. One man holds the tomb plates and coordinates the work of the others. He tells me that the bodies were brought from the autopsy for burial. Several of them are unidentified. Most of these people were killed by air strikes or land mines, but there are also tortured. After five minutes, I can’t stand it. I take a mask and tea tree essential oil from my pocket. A few drops drown out the stench.

Primitive thoughts come to mind. I wonder if all these victims have living relatives? Was it possible to bury them differently — with a prayer service, wreaths, a coffin upholstered in velvet? Who will clean the weeds on the graves of unidentified people? Can it be that the plaques will be mixed up, and relatives will go to the grave of another person?

We go back to the car. Operator Kolya notices whole colonies of mushrooms. “It’s a pity, you can’t pick them here,” he says.

In a few seconds, the car interior is filled with a stench. Our clothes smell of earth and spoiled meat. Even with the windows open, nothing changes. To get rid of the stench, I will need to wash these things three times in the washing machine.

At half past six in the evening it becomes clear that we will not have time to reach Kharkiv by daylight. The nearest relatively safe place is Kramatorsk. Soon we come to a reservoir. The crossing over it has been blown up — cars are transported from one bank to the other by ferry. We spend more than an hour in the queue. When only two cars are left in front of us, the ferry turns around: today it no longer runs. It is impossible to get to the other side.

We return to Lyman and park near the police station. The temperature outside is rapidly falling. I am wearing fleece pants, a T-shirt, a cardigan, a jacket, and a bulletproof vest. It is warmer with it, but because of its weight, my back starts to hurt. Kolya has a gas device for heating water, he brews fresh tea. Soon they will have to turn off the engine and turn off the stove in the cabin. The night will not be easy. There is a thermal blanket in the first aid kit, but my feet are still freezing.

There are still attacks on the Lyman — Kolya decides to stay awake all night to control the situation. Pavlo and I fall asleep within an hour.

It is already dawn. I feel that my nose is stuffy, but, most importantly, we survived the night. Pavlo does a little exercise, Kolya boils water for tea. People start gathering near the police station. We go out to check the situation and in twenty minutes we drive on. The next stop is Sviatohirsk.

I visited Sviatohirsk as a child. I remember it as a beautiful city for recreation: Sviatohirsk Lavra, the Siverskyi Donets River, forest, and incredibly clean air. Now it is unrecognizable — not a single living house is left there. There are almost no people. All the time in Sviatohirsk, I am accompanied by the question: when will this place become suitable for life and tourism again? How much money and time will it take?

Donbas has changed me — just as I wanted it to. It is a place of contrasts and sobering. When you sit in an apartment in Kyiv, the situation seems completely different, even if you try to analyze it more deeply than in the disputes on Facebook. It is impossible not to think about people who have gone through perhaps the most terrible experience of their lives. About people who should not have gone through it. About people with radically different views, political position, level of education, values. These are all our people: with destroyed lives, with losses, traumatized and maimed by Russian propaganda or hostilities.

We need to somehow continue to exist, we need to reintegrate. Not to condemn, no matter how much we want to. Because the experience of a Kyivan and a Lyman resident is different. Different conditions, different background, different information space, different life (but all this does not negate the responsibility for collaboration and treason).

I come back from each business trip completely different. The focus changes. Most of the problems that seemed important before, now do not cause any feelings inside. It is very interesting to explore society and people. However, this process always takes away a part of you and destroys something inside.

But who of us has not lost something in this war?