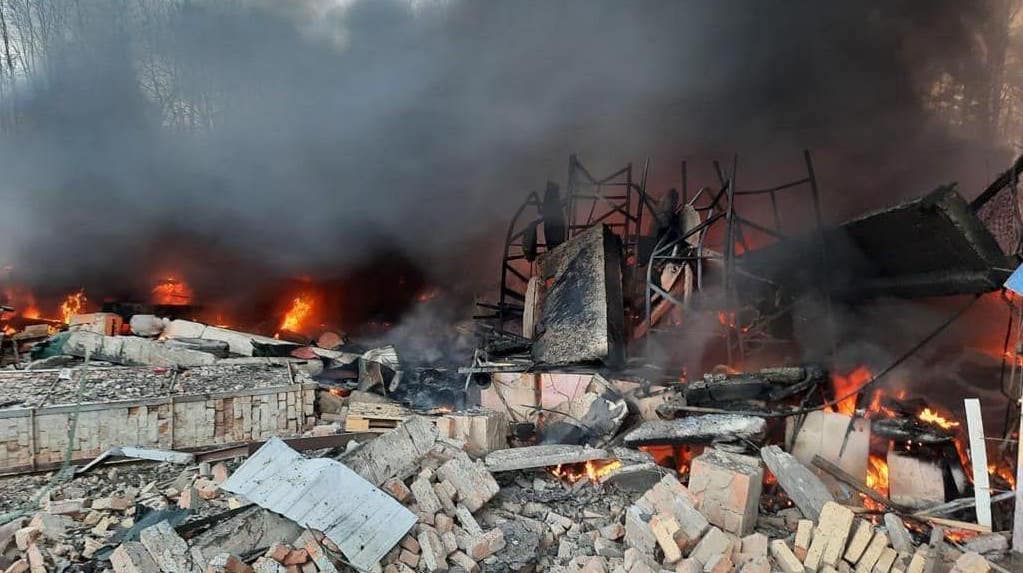 Results of enemy shelling of one of the SBGS facilities in Kyiv region. Photo: Ministry of Internal Affairs

On February 24, around 5 a.m. Kyiv time, Russian President Vladimir Putin declared war on Ukraine. In his address, he said that the Russian Federation would conduct a “special military operation” to “protect people who have been subjected to abuse and genocide by the Kiev regime for eight years.”

After that, the state border of Ukraine in Luhansk, Sumy, Chernihiv, Kharkiv, and Zhytomyr regions was attacked by the Russian army. Soon after, Ukrainian President Vladimir Zelensky imposed martial law throughout Ukraine — a decision supported by Verkhovna Rada, the parliament of Ukraine.

“The legal regime of martial law is necessary so that the state can fully defend itself. It is imperative for civilians to have their documents on them, to be attentive to official information, to be ready to help the military, police and rescue workers if necessary,” the State Service for Communications and Information Protection wrote.

Shelling in the cities

The General Staff of the Armed Forces of Ukraine reported bombing strikes on airfields in Boryspil, Ozerne, Kramatorsk, Kulbabkine, Chuhuiv and Chornobaivka. Subsequently, state authorities informed about the first explosions in Kyiv — one occurred in the early morning near Vasylkivska metro station, followed by the start of shelling of critical infrastructure. Windows were blown out in nearby houses, billboards and shopping spots were damaged.

A shell hit the center of Uman, killing one person and wounding five. The city announced the evacuation of people within a 30 km radius of the military unit located there. In Khmelnytsky, the enemy hit the runway of a military airfield. In Mariupol, the occupiers shelled seven private houses, and in Nizhyn six people are stuck under the rubble of the airfield of the State Emergency Service.

Russia also struck in the western regions of Ukraine: in Ivano-Frankivsk and Lutsk, missiles were fired at airports. In Lviv region, three military objects located in Brody, Kamyanka-Bugska, and Novyi Kalyniv were shelled.

Russian military equipment breached the Ukrainian border through Vilcha checkpoint in Zhytomyr region, Senkivka and Gremyach checkpoints in Chernihiv region, Budarky in Kharkiv region, and Milovo in Luhansk region. Most of the border units and patrols in Luhansk, Sumy, Kharkiv, Chernihiv and Zhytomyr regions are returning fire — there are wounded among the border guards. Russian troops have made a breakthrough in Kyiv region — the sounds of explosions can be heard clearly around the capital and in the city itself.

However, the Ukrainian army continues to defend Ukrainian territory. The president gave orders to inflict maximum damage on the occupiers. Four Russian tanks were burned on the Kharkiv bypass road, about 50 occupiers were destroyed near Shchastia, and a plane of the Russian Military Forces was shot down in Kramatorsk — it’s the sixth one in a row.

Zelensky submitted a bill to the Verkhovna Rada on the general mobilization of Ukrainians, but its text is not yet available.

What’s going on in the cities

Ukraine has completely closed its airspace to civilian users. Sirens went off in many cities. People have created huge queues at supermarkets, ATMs, gas stations and pharmacies. Many people are trying to leave major cities where explosions have been heard, so large traffic jams are forming at the exits from the cities.

At the same time, public communal transport in Kyiv and Kharkiv was made free. Ukrzaliznytsia (Ukrainian railway) said that it has already evacuated 3,100 Ukrainians from Donetsk and Luhansk regions, and also launched an additional train from Kyiv to Vinnytsia.

Many fakes are spreading online concerning the shellings, casualties and the official statements of Ukrainian government agencies. The SBU (Security Service of Ukraine) published an appeal on Facebook, refuting information that the Health Ministry issued orders to evacuate hospitals to the western regions, and that the Ministry of Education ordered the mobilization of students.

“We urge citizens to use verified information from official sources and not to spread rumors. The task of the aggressor is to sow panic, ours is to remain calm and not to give in to any provocations,” the security service wrote.

Office of the President of Ukraine

General Staff of the Armed Forces of Ukraine

Cabinet of Ministers of Ukraine

Ministry of Defense of Ukraine

State Service for Special Communication and Information Protection of Ukraine

Territorial Defense of the AFU

Ministry of Infrastructure of Ukraine

The State Service of Ukraine for Transport Safety

US: US President Biden: “The United States and its Allies and partners will respond in a united and decisive way. The world will hold Russia accountable.”

EU leaders: “The EU stands firmly by Ukraine and its people as they face this unparalleled crisis. The EU will provide further political, financial and humanitarian assistance,” EU Council President Charles Michel and President of the European Commission Ursula von der Leyen said in a joint note on the crisis in Ukraine. “The Russian attack has no justification. Responsibility lies with the Kremlin, which will answer for the consequences of this act of war. In these difficult hours, Europe is by Ukraine’s side,” EU Economic Affairs Commissioner Paolo Gentiloni wrote on Twitter.

Germany: “Germany strongly condemns this reckless act by President Putin. Our solidarity is with Ukraine and its people,” the German Chancellor stated.

NATO: NATO “strongly condemns” Russia’s unjustified attack against Ukraine. “We call on Russia to immediately cease its military action and withdraw all its forces from in and around Ukraine,” the official statement reads. “We stand with the people of Ukraine at this terrible time. NATO will do all it takes to protect and defend all the members of the Alliance.”

France: “Together with Ukrainians and partners, we are working to stop the war,” the French president stated.

Poland: “We cooperate with our allies from NATO and the EU. We will jointly respond to Russian brutal aggression and will not leave Ukraine without support,” the Polish president said.

South Korea would join sanctions against Russia if the latter makes a full-scale invasion of Ukraine.

“The South Korean government has no other option but to join sanctions against Russia, including export controls, if Russia continues full-scale war in any form, despite repeated warnings from the international community. The use of force that could lead to the deaths of innocent people cannot be justified under any circumstances,” the head of state said after hearing a report on the situation in Ukraine from the head of the National Security Administration, Suh Hoon. “Despite constant warnings and diplomatic efforts by the world community, the feared armed invasion of Ukraine has occurred. Conflicts between countries should be resolved through dialogue, not war.”

Georgian Ministry of Foreign Affairs on events in Ukraine stated: “

We are deeply concerned about the events in Ukraine. Russia’s military actions undermine Ukraine’s territorial integrity and sovereignty, as well as the fundamental principles of the UN Charter and international law, which will have dire consequences not only for Ukraine, but for the international community as a whole. We express our strong solidarity with our friendly Ukrainian people. We call on the international community to take all necessary measures to de-escalate the situation and end the violence.”