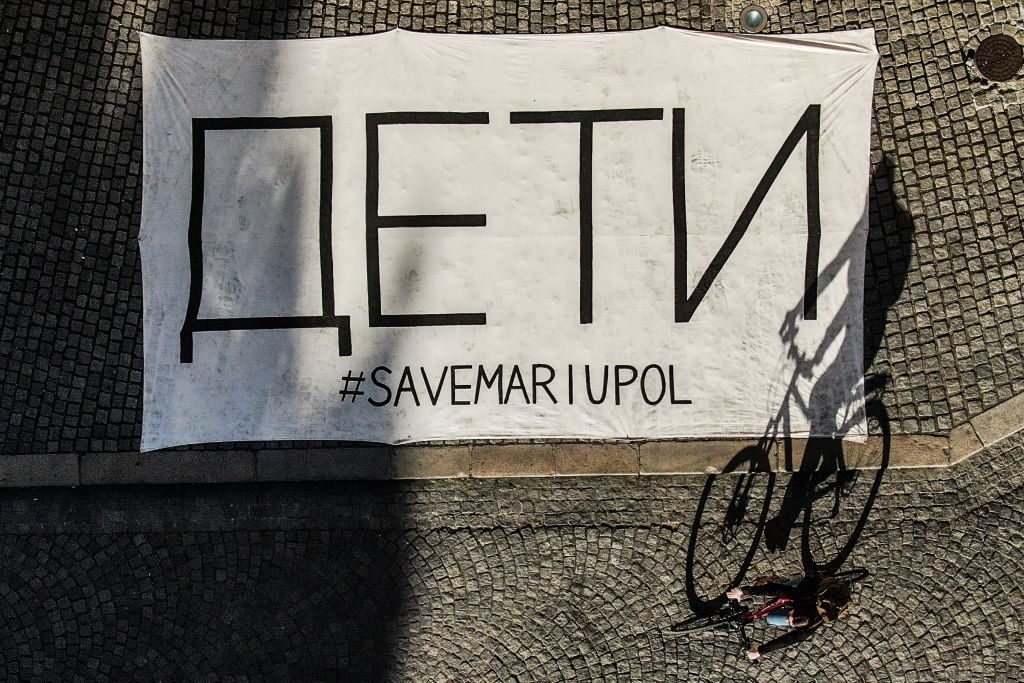 A banner is seen in front of Juliusz Slowacki Theatre, as a sign of solidarity with Ukrainians who lost their lives in the Mariupol theatre shelling, is seen in Krakow, Poland on March 28, 2022. Photo by Beata Zawrzel/Anadolu Agency via Getty Images

As a result of the terrorist attack in the Mariupol Drama Theater, about a hundred people died. These figures from the Donetsk Regional Prosecutor’s Office include those who died at the scene of the explosion and those who died of serious injuries.

Zaborona tells about the data of prosecutor Artem Shalata, who is working on the investigation of the crime. Read a large text on the results of months of study of official materials and people’s testimonies on the website soon.

The independent Ukrainian media outlet Zaborona appeals to war witnesses. If you saw the crimes, you have evidence or have something to tell us, write us. The world must know the truth, and the criminals must be punished.

On March 16, 2022, Russian troops shelled the Mariupol Drama Theater. The theater premises were a shelter from shelling for hundreds of Mariupol residents. According to various sources, between 500 and 1,000 civilians were near and inside the Drama Theater at the time of the shelling. There were large ‘ДЕТИ’ (‘children`) signs in front and behind the building, and they were visible even from the satellite.

The Donetsk Regional Prosecutor’s Office opened a case on the shelling of the Drama Theater. Because Mariupol is occupied by the Russians, investigators have no access to the site of the tragedy and the dead bodies.

“The department investigating crimes committed in the temporarily occupied territories of the Donetsk region in conditions of armed conflict was created in December 2019. Therefore, prosecutors have experience in such proceedings when there is no access to the scene. Specifically in this case, we mainly receive information from open sources and from witnesses and victims who survived in the city and were able to escape from Mariupol to Ukraine-controlled territory,” Artem Shalata, deputy head of the procedural management of criminal proceedings for crimes committed in the temporarily occupied territories of Donetsk region, of Donetsk Regional Prosecution Office, explains to Zaborona.

Prosecutors were able to question more than 100 witnesses. Investigations continue and law enforcement officers continue to collect evidence and search for witnesses. On the basis of the evidence the approximate course of events before, during and after the explosion has been established. The prosecutor’s office assumes that about a hundred adults and children were killed and injured in the terrorist attack at the Drama Theater. Shalata notes that this figure is inconclusive and may change when the investigation has access to new data and the crime scene.

How many people died in the Mariupol Drama Theater: versions

Data from the Donetsk regional prosecutor’s office differs greatly from those released by local officials. On March 25, the Mariupol City Council claimed that about 300 people were killed during the attack.

The Associated Press conducted their own investigation and found that the number of casualties could have been twice as high.

At the same time, terrorists from “Donetsk People Republic” and the Russian Federation, traditionally blaming the Armed Forces of Ukraine for the air strike, stated that 14 people died, and that the official figures of Ukrainian and international observers were fake. In the first days of the occupation, the Russians began to clear away the rubble of the Drama Theater: there is a confirming video published by journalist Andrei Lokhmatov.

On August 31, the StratCom of the Ukrainian Armed Forces reported that the occupants poured concrete over the bodies in the Drama Theater, and tried to remove the dead bodies odor with chlorine, in order “not to make a fuss”.