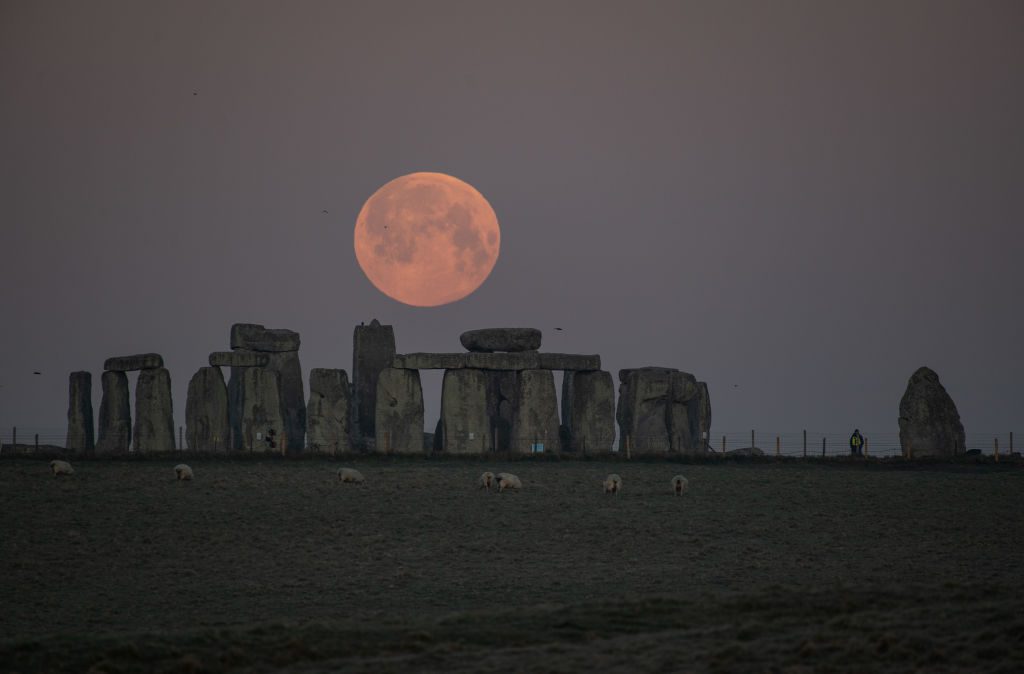 The full moon sets behind Stonehenge on April 27, 2021 in Amesbury, England. Photo by Finnbarr Webster/Getty Images

On April 16, 2022, the Earth’s satellite, which is called pink in the middle of spring, will look especially large on Catholic Easter. Ukrainians will also be able to observe this phenomenon.

Zaborona tells where to see the pink Moon in Ukraine and the world and why the satellite looks like this in April.

Full moon on April 16: where to see a miracle on Catholic Easter

The biggest and brightest full moon of 2022 is expected during the Catholic Easter weekend. The full moon will last from Friday morning, April 15, to Monday, April 18. However, the real peak of the pink Moon will be on Saturday, April 16 at 21:55 Kyiv time.

The best time to observe the full moon is when it’s rising, writes Travel and Leisure. The satellite appears on the eastern horizon: it is orange at first, then it turns pale yellow, and finally becomes a bright white ball and rises higher into the night sky.

Although the exact time of the moonrise depends on where you are on the planet, this month’s celestial schedule is friendly to North America. Those who will be in New York on Saturday must look in the East from 19:44 Eastern Daylight Time (EDT), while in Los Angeles they must look in the same direction at 19:41 Pacific Daylight Time (PDT). In both cities the sun will set 10-20 minutes before the moonrise.

According to Ukrhydrometcenter, it will be cloudy and clear in Ukraine over the weekend, so Ukrainians will also be able to see the big pink Moon in the sky.

The April full moon is traditionally known as the Pink Moon because it coincides with the flowering period of the moss called Phlox Subulata in North America. Although the name has nothing to do with the actual color of the satellite, under the right conditions it may have a pink tinge, writes The Independent.

We usually see the Moon co;oured pink when it is close to the horizon. Then the sunlight reflected from the satellite to Earth passes through a filter of clouds, dust, smoke and polluted air, which gives it a pink color.

In April, the Earth’s satellite may also appear larger due to an effect called the “illusion of the moon”.

NASA explains that this phenomenon exists because of the way our brains process visual information, although there is still no complete scientific explanation for it.

Trees, buildings and mountains can make the brain imagine that the Moon is closer than it really is. This explanation is not complete, because NASA astronauts in orbit also observed the illusion of the Moon, although there are no objects in space to compare size.

The Moon will look bigger and brighter during the next full moon, as its orbit approaches the Earth. Supermoons will also be observed in June and July, because during this period the satellite will fly closest to Earth.

Earlier, Zaborona told about the dispute between billionaires Elon Musk and Jeff Bezos over the mission to the moon in cooperation with NASA.