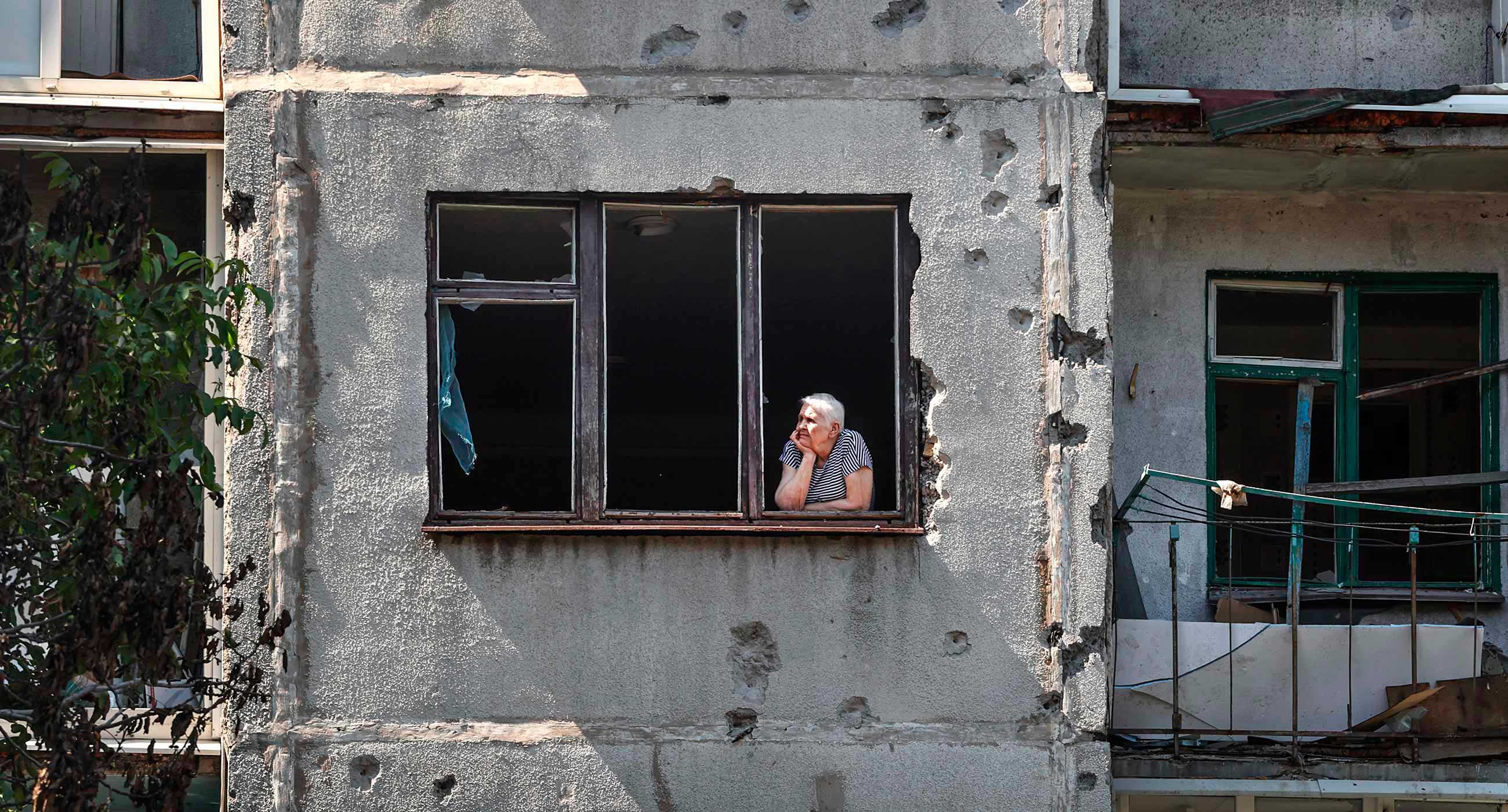 Ever since Russia launched an active offensive against Ukrainian cities in Donbas, the local authorities have been calling on civilians to evacuate as soon as possible, so as not to risk their lives and put a strain on the infrastructure. But not everyone is ready to leave.

Zaborona video reports are available on our YouTube channel, as well as on the European Broadcasting Union, which unites 112 public broadcasters in 55 countries.

Slovyansk, a relatively small town in the Donetsk region, experienced an occupation in 2014 when former Russian FSB officer Igor “Strelkov” Girkin occupied it with the help of local criminals and traitors in the police and town council. It was Slovyansk that was then called the main goal of the Russians – they wanted to start the accession of Donbas to Russia from it as part of a propaganda campaign to “protect the Russian-speaking population from the Nazis.” On July 5, 2014, the Ukrainian army liberated Slovyansk, and the militants of the “Donetsk People’s Republic” together with Russian mercenaries left Slovyansk and occupied Donetsk.

Since Russia invaded Ukraine, Slovyansk has been under attack again, only now from the opposite side: Russian troops are trying to enter the town from the side of Sviatohirsk and Lyman, which they already occupied. The situation can be compared with Severodonetsk: Russians tried to occupy the town for a long time to show that now the new “capital” of the Luhansk region is under their control, and in fact completely destroyed it. On June 24, the head of the Luhansk Military Regional Administration, Serhiy Haidai, announced that the military leadership had decided to leave Severodonetsk. After that, residents of neighboring Lysychansk began to leave the town much more actively, realizing that the occupiers could do the same to it as they did to Severodonetsk.

Olena continues to live in her apartment in the building in the center of Slovyansk, which was hit by a Russian missile on May 31. Windows and doors were broken in the house, there was a fire. Traces of blood are still visible on the stairwell: the neighbor from the fifth floor died. The woman assumes that some of his remains still remain in the apartment – the local utility services cannot cope with the flow of tasks.

The woman is not going to leave Slovyansk: for now, she sees her mission in protecting the house from looters.

“While we were cleaning the apartments [from the consequences of the explosion], looters sneaked in and took out the washing machine and boiler,” says Olena. “I’m kicking them out of here. And I have nowhere to go.”

Yevhen works at the market in Sloviansk — he sells wheat and compound feed. The man is not evacuating because, as he explains, he had already fled from the occupied Yenakiieve eight years ago. He says that the situation then hardened him and he tolerates the shelling relatively calmly.

“How many times can you move?” Yevhen says. “I am a believer and believe that everything will be fine, everything will be ok. My wife and child left for Lithuania, and I have housing and income here. Many people return because they run out of money and there is no work. And I have the source of income.”

Olena lived for two months in Western Ukraine in evacuation together with her husband, children, and elderly parents. She had to pay for housing and food, and she never received help for IDPs from the state.

“We ran out of money,” she explains.

Now Olena works in the market in Slovyansk – together with her husband, they sell doorknobs and locks. Olena says that her house in Slovyansk was damaged back in 2014, and the family had to restore it on their own. Therefore, she does not believe that they can be helped this time.

“Everyone is afraid,” she says. “Both in Lviv and Kyiv missiles are thundering, sirens are howling everywhere. People come back because they run out of money. Free accommodation is provided in schools, on the floor. And without money, we are nowhere needed.”

Nataliya lives in Slovyansk and works as a secretary at Ukrzaliznytsia. In her free time, she helps internally displaced persons from recently occupied territories and cities where there is intense shelling. She administers a second-hand store in the town center, and people who fled from Sviatohirsk, Lyman, Severodonetsk, and Kostyantynivka constantly come there. Despite constant shelling, Nataliya does not leave the town.

“If we close the store, there will be no one to help them,” she explains. “People come to us completely naked, they have their houses broken. They have been sitting in basements for months and their eyes are often squinted because they have not seen the light. Many local elders stay. That’s why we stay too because we want to help people. If it’s scary, we’ll leave. We’re holding on for now. The car, filled with gasoline, is ready.”

Said Ismagilov, the former mufti of the Religious Administration of Muslims of Ukraine, is from Donetsk. He was forced to flee his hometown in 2014 and, like many natives of Donbas, settled in Bucha, near Kyiv. When Russian troops entered the territory of the Kyiv region in February 2022, the mufti met them with weapons in hand. After Bucha was freed from the occupiers, Said Ismagilov went to the front line, closer to his native Donetsk. Now he helps to transport wounded soldiers and civilians from the front line.

“After I lost my house twice, I decided I would not run away anymore,” says the mufti.

Recently, we reported about the evacuation from the war zone in Pokrovsk.

What did Ukrainian cities look like before the war?