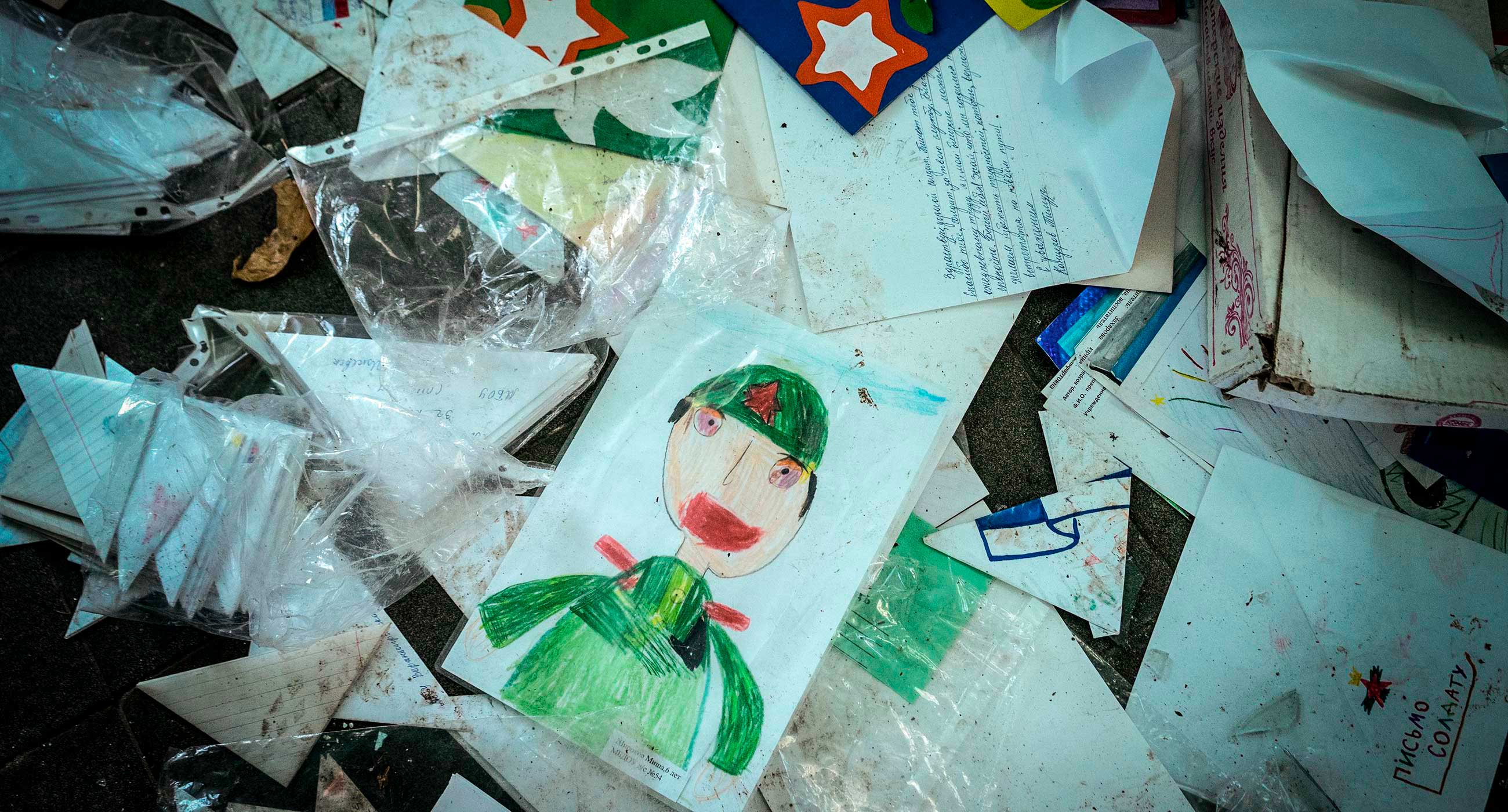 A picture of 6-year-old Misha from Russia, which he sent to support the military occupying Kozacha Lopan. Photo: Ivan Chernichkin / Zaborona

The village of Kozacha Lopan in Kharkiv Oblast is on the border with Russia. It became one of the first settlements that Russian troops occupied from the beginning of the full-scale invasion. After the village’s liberation on September 11, several torture chambers were found here, where the Russians kept local people. Zaborona journalist Polina Vernyhor visited Kozacha Lopan and told about the life of the occupiers, the pro-Russian moods of the population, and the life of the de-occupied border village.

The Russians occupied several buildings in the center — in some of them, they set up a “commandant’s office”; in some — torture chambers, and somewhere they settled themselves.

One of the residential premises was the train station, a white three-story building near the village council. Trains to Russia used to pass through this station. But after the de-occupation, broken wires hang over the tracks, and the rails are covered with glass, stones, and garbage.

Russian soldiers lived on all floors of the railway station. At the end of September, when the Zaborona team got to Kozacha Lopan for the first time, the premises had not yet been cleaned after the self-proclaimed “hosts.”

You first notice a sharp, unpleasant smell at the entrance. It is not immediately clear what it is: like some spoiled porridge mixed with toilet ombre. On the first floor, there is a large waiting room. The chairs there were moved so that you could lie on them. On the back of one hangs an almost brand-new Ukrzaliznytsia jacket: the shoulder straps are torn, and several buttons are missing — the occupiers probably found it in one of the station’s offices. A thick book, “Russian Discoveries in the Pacific Ocean and North America,” is lying on the chair.

In the middle of the hall is a pile of clothes, primarily women’s and children’s. The locals told Zaborona that the Russians had stolen it from the shops. They say that they took away everything, even children’s underwear.

Scattered among the clothes are religious literature (something about repentance before God for the sins of humankind) and whole boxes of children’s letters and drawings from Russian pupils. Almost all of them are written like a copy: the words are the same, but the handwriting is different. We pick up one sheet from the floor to read how the eye catches the other corner of the sheet. Something dark brown stuck to it. The most unexpected guesses are confirmed: they used children’s letters and drawings after pooping.

On the side of the same building is a small basement. We go in. It’s dark inside the two-by-three-meter room. In the center is a long table; on it are cigarette butts, empty bottles of cheap wine and vodka, and two books of Russian classics: “What to do?” by Chernyshevsky and “Who is to blame?” by Herzen.

From this room, there is an exit to an even smaller room — only a bunk bed could fit there. Prisoners were kept in this small room and tortured in a larger one.

Vitaly, the son of a 58-year-old resident Lyudmila, who lived in Kozacha Lopan all her years, passed through this torture chamber. At the end of March, the woman’s neighbor left the village. She left Vitaly the keys to the house and asked him to take care of the cats.

“He let the cats out in the morning, fed them, and we let them back to the summer kitchen in the evening. No one even opened the house. Neighbor Roman went to the occupiers and said that Vitalik was stealing. They took him away,” the woman recalls in a conversation with Zaborona.

During the interrogation, Vitaly told the Russians that he earns a living by repairing phones, which is why he has several smartphones. Then the occupiers accused the man of stealing them from the village residents.

When Lyudmila found out about her son’s abduction, she immediately went to the station. She sat on a bench opposite the entrance and demanded that her son be set free. But the occupiers ordered her to go home.

“I said: ‘You can shoot me here, but I won’t go home without my son.’ She sat on the platform for almost three hours. She even fainted from the cold and nerves. They came out to me. I asked them, “Why did you come here and do this to us?” He says: “It’s not us; it’s you. My son sat in the basement for eight years, and you will sit.” And I say: “How am I connected to your son? Did I start a war with you?” They promised they would not beat my son, but they still beat him, tied his hands with tape, put a cap on his face, and scared him. They threatened to cut off his fingers and ears,” says the woman.

Within three hours, the beaten Vitaly was thrown out into the street. Now the woman says her son was still lucky — other people could be kept in that room for five days. However, even these three hours affected his behavior.

“He lost his nerves. He used to be able to drink on a nervous basis, but he stopped eating and started boozing. When ours came in, he got into a neighbor’s car and drove away. And three days later, in Kharkiv, he was admitted to the hospital with a heart attack,” Lyudmila says.

The railway station is not the only torture chamber the Russians set up in Kozacha Lopan. Opposite it are the branches of Nova Poshta and Ukrposhta. At that moment, the buildings were crushed: there was no glass in the windows, and nothing was left inside except the countertops for issuing shipments. All letters and parcels were stolen. The Nova Poshta premises were also a place of imprisonment and torture of locals, including Ludmila’s neighbor Pavlo.

“I haven’t seen him for a day. When I saw him, he was barely going. I said: “Pasha, what happened?” He replied: “Aunt Luda, everything is fine.” I said: “What’s fine? Why are you lying to me? You barely talk.” And then he lifts his jacket, and everything in it is blue. They beat with a stick on the back, on the kidneys. I asked why he was beaten. He said that he went to see them himself,” Ludmila recalls.

Pavlo’s mother left Kozachi Lopan on the very first day of the war. She evacuated by car, but a shell fell in front of the car on the way. One woman’s legs were torn off, and the other was saved, but the extent of the injuries is critical. She is still in Kharkiv on a ventilator. Pavlo went to the Russian soldiers to ask to be released to Kharkiv to see his mother. The request was regarded as a personal insult — they say that the man lives badly under their regime.

For several days after the “interrogation,” Pavlo could not walk. Lyudmila brought him food, but he couldn’t eat either: the pain made it difficult to even get out of bed.

Kozacha Lopan is located five kilometers from the border with Russia; electric trains and trains used to arrive at the local station from there regularly. For the most part, Russians were interested in local shops and the market: the products are of better quality and lower prices.

“You could not come to the store before lunch until all the trains with Russians had left because the lines were incredible. All trains there were canceled later. It became easier for us and worse for the sellers — the earnings became significantly less. Katsaps bought everything from us in bags: sausage, vodka, candies,” Lyudmila says.

Such long-term communication could not but affect the mood of the residents of Kozacha Lopan. About the fact that about 80-90% of the population in the village does not support Ukraine, a National Guard soldier with the nickname “Apach”  whom we met here, told Zaborona. His positions are nearby, so the soldier is often in the village and periodically communicates with the locals.

“On the first day we entered here, the commander showed me a detained collaborator. He had maps, a tablet, a laptop, and a navigator. Then, when we talked with this person, he said: “I don’t care whose hat I wear. I’m yours, what’s theirs.” He does not hide that he cooperated with the Russians, fed them, and gave them housing. I don’t know what to call it. People are different, but it turns out that some are ready to rely on empty words and promises and betray their neighbor,” says “Apach.”

Zaborona’s interlocutor Lyudmila confirms the widespread pro-Russian moods of some residents of Kozacha Lopan. She says that some were even afraid to leave their yard, while others went to help Russian soldiers daily. And not all residents are satisfied with the fact that their village was liberated from occupation.

“Once, one old woman said, “Why did they stop here? At least we were with light.” I say: “Weren’t you sitting in the basement?” Let ours be better, without electricity, without gas — I will fetch firewood, — says the woman. “I’d rather sit under a peaceful sky, calmly go outside, and not be afraid to call my daughter because they will take the phone and break the SIM card.”

Is it possible to forgive?

On September 11, the Armed Forces of Ukraine liberated Kozacha Lopan from the Russian invaders. The village began to be covered with shells in less than a day. They shoot here day and night, mostly hitting houses, gardens, railway tracks, and shops.

Despite this, the village is slowly returning to life: shops are reopening, groceries are delivered regularly, pensioners have started receiving pensions, and the local hospital dispenses necessary medicines for free.

Today, about two thousand people live in the village. Many returned home as soon as Kozacha Lopan was de-occupied. While some, Ludmila says, do not stay long because of shelling.

“I am not going to leave my land anywhere. Everything will be rebuilt anyway. Everything will be fine and peaceful despite those scoundrels’ envy and evil. I am Russian by nationality, but I could not tolerate them all my life, even in those Soviet times. I will never forgive them for what they did. We lived luxuriously,” says Lyudmila, “To forgive, one must understand. Can this be understood? It is impossible to understand.”