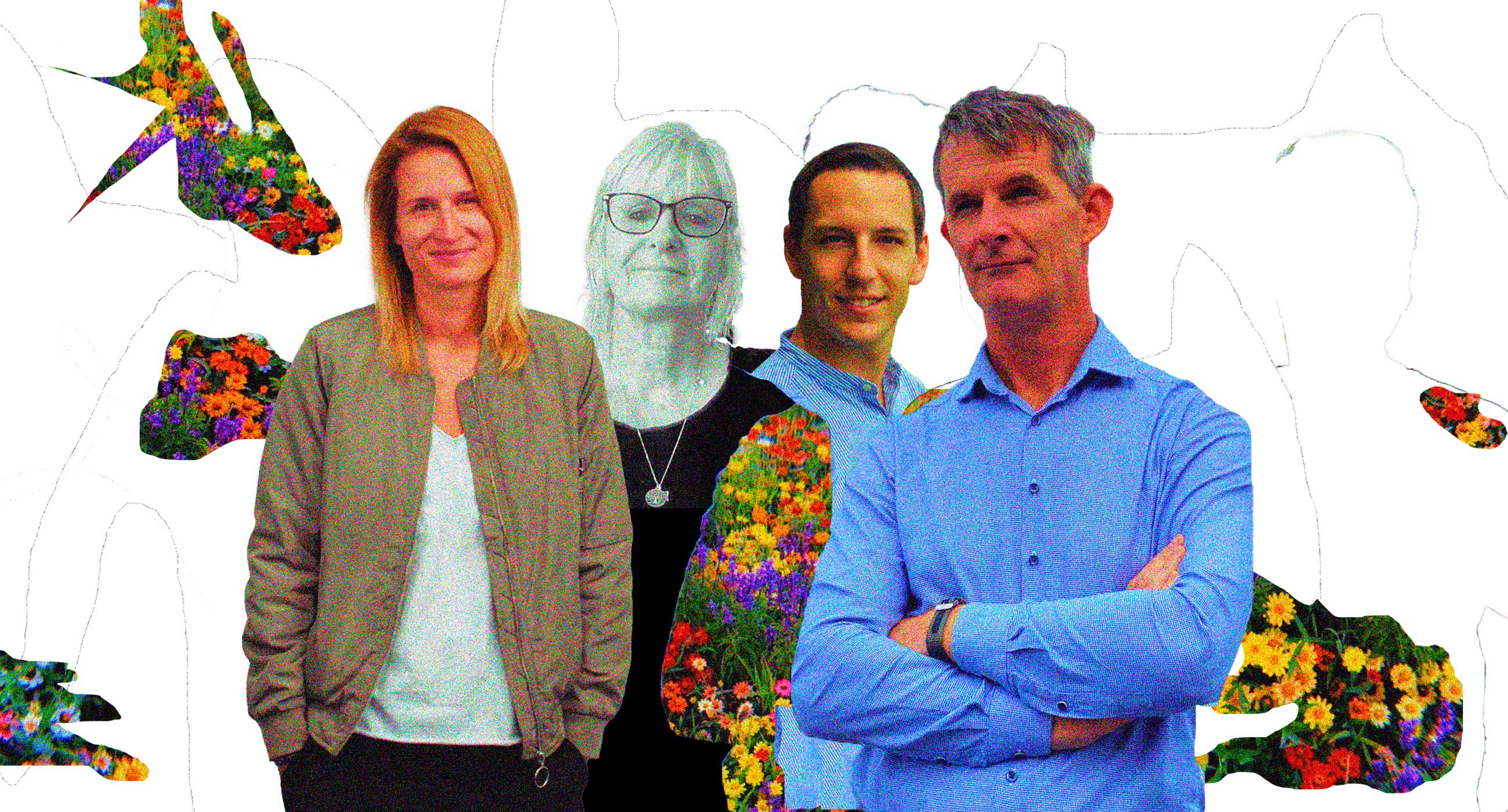 In six months, more than 7 million people have left Ukraine because of the war. According to a report by Eurostat, Poland, Moldova, Romania, and Ireland topped the list of EU countries sheltered during June the most Ukrainians who fled abroad due to the Russian invasion. However, according to the UN High Commissioner’s Office, the report does not include data on several countries, including Austria, Germany, and the Czech Republic, where a lot of Ukrainians go. Zaborona journalist Anastasiya Opryshchenko spoke to foreigners whose countries have sheltered the largest number of Ukrainians about what they knew about Ukraine before the full-scale war, how they met Ukrainians after February 24, and what impressed them.

“I didn’t really know anything about Ukrainians,” 63-year-old Patricia Rainsford admits in a conversation with Zaborona. For her, until February 24, 2022, Ukraine was a close neighbor of Russia and a country of the former USSR. However, the woman knows about the war that has been going on since 2014 — as well as the fact that Russia annexed Crimea.

Patricia is the National Communications Coordinator at the Dublin office of Bahai, an international religious organization that provides social and psychological support to people in times of need. She works with NGOs, community leaders and provides legal support for Iran, Yemen, and Qatar. People from there are subjected to severe persecution, discrimination, and imprisonment.

She met Ukrainians at the English conversation courses in the town of Kilkee, County Clare, Ireland. And Patricia’s first impression was immediately positive.

“We have more in common than differences,” she says, “Most of the differences are cultural, but I think Ukrainians are more like the Irish than other Europeans. You can see it in the temperament — Ukrainians are cheerful, cordial, and love to laugh.”

Now Patricia from her organization helps Ukrainian refugees to integrate in Ireland. She is most impressed by the fact that despite the war, Ukrainians in Ireland are ready to acquire new knowledge and work skills. According to the woman, this shows a commitment to work ethic and education.

“In my experience, what doesn’t kill us really makes us strong,” Patricia said, “Suffering can both soften the heart and help us gain new perspectives on life when we realize what is truly important.

Eibhir Mulqueen, 55, lives in Kilrush, County Clare, where he teaches English to internally displaced people from Ukraine. His work was perhaps the first place where he was able to personally meet Ukrainians. In a conversation with Zaborona, he says that even knowing about the Orange Revolution, the “little green men” in Crimea, and the war in Donbas, he was still shocked and upset by Russia’s actions after February 24.

“Russia has taken a retrograde step and is going to become an increasingly closed, authoritarian society,” he said, “I’m sorry that people are dying regularly from Russian attacks.

According to Mulqueen, the vast majority of Ukrainians he has met personally are friendly, knowledgeable, and ready to build their lives forward. But what struck him most was that Ukrainians are very dynamic people.

“This is clear both from my direct experience and from what I read and heard about the defense of Kyiv in February and the recent success of Ukrainian troops,” he explains.

The man believes that Ukrainians are now fighting for the whole of Europe, so he hopes that both Ireland and other countries will continue to support Ukraine.

“I want to believe that your sacrifices will bring you only good things in the future and that Ukraine’s membership in the EU will be beneficial for everyone,” Mulqueen emphasizes.

He also plans to visit Ukraine in the future and possibly visit the people he taught English to in Ireland.

26-year-old Stefan Weninger lives in Vienna and works as a civil engineer. Like many Europeans, he knew only basic things about Ukraine. In particular, he admits that he thought Ukrainian and Russian were the same language.

“Now I have no words for the actions of the Russians. It’s just incredibly horrible,” he tells Zaborona.

In the spring of 2022, he sheltered migrants from Ukraine in his apartment. The man says it was the first time in his life when complete strangers lived with him for a long time. But Stefan quickly realized that he had much more in common with the Ukrainians than he expected and calls the experience special.

“I could talk about the situation in Ukraine directly with Ukrainians, hear their personal stories about the war. And it had a great impact on me,” he says.

They told him how they woke up from the bombs, how they decided to leave their home, how they traveled for hours to a foreign country where they knew no one, and how they are now worried about their relatives and friends who are still in danger.

“All this touched my soul. There is a big difference between when you hear these stories on TV and in person. I cried and a strong desire to help these people grew in me,” Stefan recalls.

While communicating with Ukrainians, the man realized that he likes the Ukrainian food culture, when people sit down to eat in a big company, not alone. But at the same time, he is surprised by the conservative views of the family of some Ukrainians, who believe that women should be engaged in household chores, and men are responsible for earning money.

“Generally speaking, Ukrainians and Austrians seem to live in different time zones. For example, Ukrainians can often sleep until 2 p.m. and start their day late, when the city starts working at 8 a.m.” Stefan explains “Shops close at 6 p.m. and are completely closed on Sunday. So Ukrainians complain that the supermarket does not work at night. It’s a bit annoying.”

In the future, the man would like to come to Ukraine and visit all the hometowns of the people he hosted. Among the cities are Kyiv, Dnipro, Mykolaiv, Mariupol, and many others. Moreover, in the summer Stefan met a Ukrainian woman and fell in love. Now he is learning the language to speak Ukrainian with her parents whenever possible.

Today he believes in the victory of Ukrainians and wishes them to preserve their way of thinking: “You are on the only right side. The whole world stands behind you”.

Neighbouring Poland was the first to accept Ukrainians fleeing the war. To help people affected by the war, President Andrzej Duda adopted a special law, thanks to which internally displaced persons from Ukraine can use public services and receive almost equal rights with Poles.

Aleksandra Zabłocka, 32, a grant management coordinator at the Polish Humanitarian Action NGO, knows about IDPs from Ukraine very well. Aleksandra does not work directly with IDPs, but still often crossed paths with them at work. The organization has been present in Ukraine since 2014 but now works remotely. Before the full-scale invasion, Aleksandra was in Ukraine several times both for work and leisure.

Since February 24, Zabłocka has repeatedly visited the border crossing and refugee reception points in Hrebenne and Przemyśl, Poland, where Ukrainians were leaving en masse. “People were exhausted, but at the same time, they were trying to do everything possible to cope with this situation. This, in my opinion, was very powerful,” she said in a conversation with Zaborona.

In many aspects, Ukrainians are very similar to Poles, Aleksandra believes. She calls it a “post-Soviet sisterhood,” explaining that Ukraine and Poland share many similar problems and struggle for social change.

Many Poles today become volunteers to help Ukrainians and learn Ukrainian. In addition, in Warsaw, they provide information in Ukrainian and translate some news. “So we are now surrounded by this language — I like it very much,” Oleksandra says.

“Sometimes I hear complaints that some refugees are ungrateful or not grateful enough for the help they receive. This really saddens me because I believe that access to human rights is not something that anyone should be grateful for. It is a base that everyone should have,” Zabłocka emphasizes. “People have the right not to be kind sometimes. I think host countries need a lot of educational and integration support to get rid of some stereotypes about refugees.”

After the war, the woman would like to visit Ukraine again, particularly for work. But Aleksandra admits that she is afraid to see the destruction that Russia has brought to the country.

“Polish poet Wislawa Szymborska said: “We know ourselves only to the extent that we have been tested”. I think in our time, this single sentence should guide us as we try to understand why people do what they do and how we should approach them or their choices,” Zablotska said. “I am sure that all Ukrainians are doing their best to survive what is happening, and I hope that better times will come soon.”