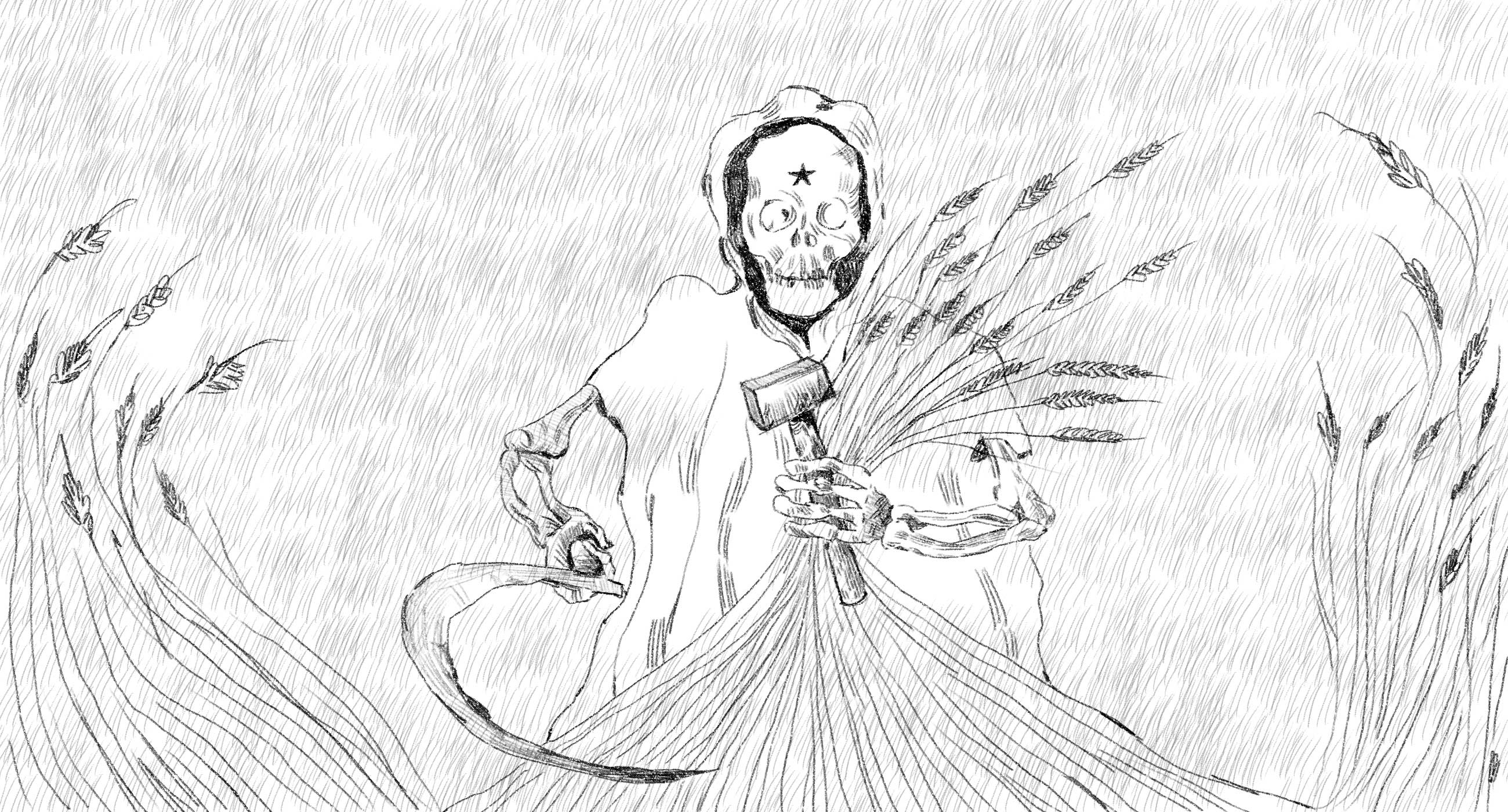 All democratic factions of the German Bundestag recognized the Holodomor as genocide — next week, Germany will become only the 20th country to recognize the artificial famine aimed at Ukrainians. Most countries of the world (so far) refrain and call the Holodomor the result of the economic policy of the USSR and part of the Soviet repressions. What are the arguments of European and American researchers against recognizing the Great Famine as genocide, and why do they compare the Holodomor and Hiroshima, says Danyil Lehovitser, Zaborona’s executive editor.

How did the concept of genocide become a political asset and why are politicians wary of the G word?

It is crucial to examine the Holodomor from a distance to understand why only 19 nations acknowledged it as a genocidal crime against Ukrainians and why others have been slow to do so for 25 years. It is required to look at how the attitude towards the word with the letter G (or the G-Word, as politicians call it with black irony) has changed.

The story began with a discussion around the book “The Holocaust Industry” by the American historian of Jewish origin, Norman Finkelstein. It is an analysis of political technologies and commemorative politics and culture simultaneously. The book was one of the first notable (and highly scandalous) works to draw attention to the politicization of the Holocaust and, more broadly, genocide, ethnic cleansing, and national trauma.

According to Finkelstein, from the open wound of the 20th century, genocide turned into a political asset. Genocide has become the dagger of politicians and public figures as a concept that causes a sharp emotional affect in society: feelings of anger, injustice, irrationality, and horror. In the 21st century, the mention of the letter G has become commonplace in political debate. For example, opponents are unfairly called followers of genocidal rhetoric, as is often done by the extreme left and extreme right to gain electoral weight in the eyes of voters. According to Finkelstein, genocide turns into a subject of economic and political bargaining: the heirs of the injured party, modern Israelis, often appeal to the genocide of their people to strengthen the political and economic capabilities of the country (it is not about reparations, which Finkelstein considers more than justified). At the same time, the mention of the genocide can be a kind of lightning rod: the researcher of historical memory Aleida Assman claims that the Israeli government mentions the genocide of the Jews, wanting to exclude from the memorial policy its crimes — the murders and forced expulsion of Palestinians.

Finkelstein’s book caused a wave of criticism (as well as approval) far beyond academic circles. Still, its central message was picked up — politicizing mass extermination along ethnic lines nullifies its ethical significance. The letter G word has turned into a plasticine of the political class. The “Holocaust Industry” is only part of the intellectual landscape that treats legally documented genocide and crimes against humanity as political leverage. Finkelstein deliberately emphasizes that most of his book is about the Holocaust, a textbook historical block that became the red mark of the previous century. Even if the Holocaust is a complete and irrefutable fact, the historian claims it is possible to manipulate even such an event.

If we expand the book’s thesis, unproven genocide, an event-that-never-happened (at worst) or one that still needs to be proven (at best), is seen from the outside as a political, not a memorial tool. It is one of the factors why most countries are in no hurry to recognize the genocide of ethnic groups that can be ignored. One often hears that the Armenian genocide, sanctioned by the Young Turk government in 1915, was the first Genocide of the 20th century. The killing of the Nama and Herero tribes in Namibia between 1904 and 1909, which led to the 80% extinction of each tribe, was nonetheless the first genocide. It is unknown precisely because it is much easier to reject Namibia’s request than Armenia’s claims. Mention by the current government of Namibia of genocide, reparations, or the establishment of commemorative practices with Germany is leveled with the go-ahead. One of the arguments: before the Second World War, the concept of genocide was not legally developed, and therefore, everything that preceded the Holocaust cannot be considered genocide. By the way, this is also one of the arguments against recognizing the Holodomor as genocide.

At the same time, in Europe and the USA, with their legal thinking, mass murder, forced deportations, or artificially created humanitarian disasters are not called genocide unless a legal body and expert groups prove otherwise. A different obstacle for forensic anthropologists is the antiquity of the event and the impossibility of studying the remains.

Recognizing war crimes as genocide worsens relations between the accused and the prosecuting party, as was the case with the US, which recognized the Armenian genocide in 2019, which worsened its relations with Turkey, and requires specific actions from the “yes” vote: pressure on the accused party, reparations, the implementation of a commemorative program, economic or military support for the defending party if the genocide is taking place at a relevant moment. Scholars of genocides and Western responses to ethnic killings call the attempt to ignore and respond to them organized hypocrisy.

Why do most countries consider the Holodomor a crime against humanity, but not genocide?

Ukraine’s attempts to persuade the world community to recognize the Holodomor as genocide may be seen by other countries as a desire to gain political support, which in pre-war times would have inevitably led to a deterioration of relations with Russia. By recognizing the Holodomor as genocide, Ukraine seeks integration into the EU’s memorial policy. The problem is that the continental memory of European countries is holocaust-centric and not at all interested in left-wing Soviet terror (which, on the contrary, is more familiar to Latin American countries that vote for the interests of Ukraine). One conceptual obstacle is enough to refer to the politicization and exaggeration of the Holodomor.

Around the Holodomor, there was no unanimous ethical assessment at the states and academic levels. The historian Timothy Snyder considers the events of the 1930s to be genocide, Anne Applebaum calls them a crime against humanity, and Norman Naimark considers them not a genocidal act but a repressive economic policy and the failure of Stalin’s collectivization. The last assumption is one of the most common.

Many Sovietologists and genocide researchers are inclined to the fact that the Holodomor was the result of harsh economic policies and the requirement to fulfill an unrealistic plan: to collect 5.8 million tons of grain, ignoring crop failures, peasant hunger, punitive measures against agricultural workers and confiscation of property and equipment for failure to fulfill the plan. Western Sovietologists are inclined to think that it could have been foreseen half a year before the beginning of the Great Famine. Measures were taken: not to export grain (the income from it was planned to finance collectivization), evacuate the population, and turn to international organizations such as the Red Cross and Joint, which had already helped the USSR during the famine of 1921. In their opinion, the rejection of these actions was dictated by economic rather than ethnic considerations. It is one of the most legally difficult points — to prove the Communist Party’s hatred of Ukrainians in a country where all ethnic groups, including Russians, were subjected to repression.

Another popular argument for recognizing the Holodomor as a crime against humanity, but not genocide, is the famine in Kazakhstan and the Volga region. In this way, the crime seems blurred and ceases to be aimed only at Ukrainians. Thus, for many researchers, the Holodomor ceases to be a genocide of Ukrainians and becomes a colonial insult directed against several ethnic minorities. Economist Michael Ellman believes that the Holodomor is not an ethnically inspired murder but a failure of the five-year plan and economic plan and another symptom of the repressive machine. According to Ellman, in this case, the Great Terror of 1937-1938 should be called genocide, as well as the atomic bombing of Hiroshima and Nagasaki and the sanctions against Iraq, which provoked starvation. Nevertheless, the economist maintains that they are not genocide because there is no concrete evidence of inciting hatred based on ethnicity.

And what do Ukrainian researchers say?

The Ukrainian side insists that the Holodomor was a radical step towards de-Ukrainization and an attempt to exterminate the intelligentsia and nationalist forces. In confiscating grain from peasants for consumption, the researchers see the interest in export and centralizing repressive mechanisms — extracting food to feed Moscow and other large Russian cities.

There is also a widespread colonial discourse about the Holodomor. According to him, Stalin tried to destroy Ukrainian ethnographic authenticity by populating Ukraine with a Russian population after the Holodomor, making it an ethnically Russian territory.