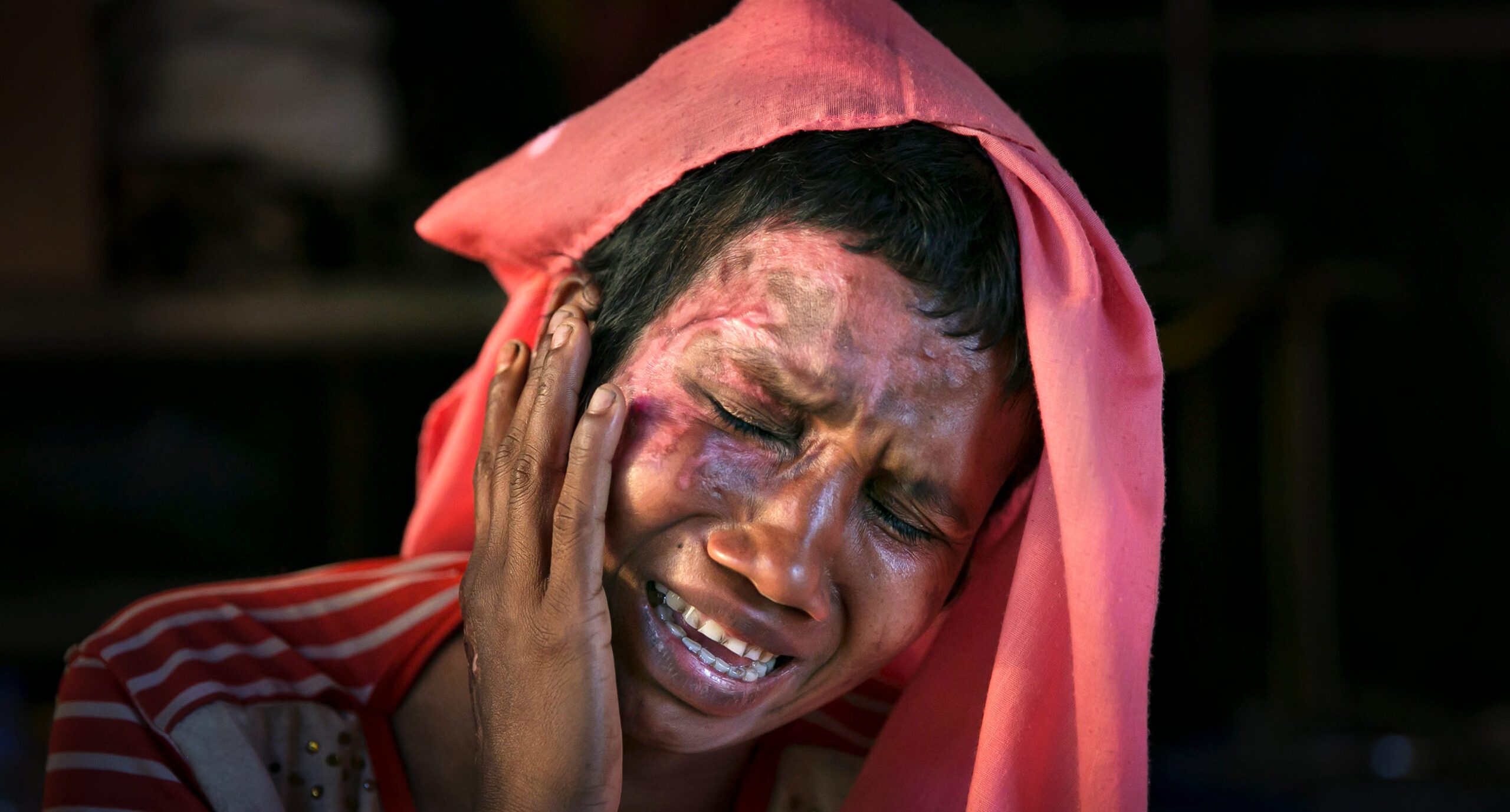 Momtaz Begum, 30, is a Rohingya from Rakhine, Myanmar. She was raped by the military in front of children, who were later killed and the house was set on fire. Momtaz was the only one who was able to crawl out of there through the flames. Photo: Allison Joyce / Getty Images

After the departure of the Russian occupiers from the Kyiv region, the world learned not only about the torture and killing of civilians, but also about the sexual violence perpetrated by the Russians. Human Rights Watch researcher Yulia Horbunova told Radio Svoboda that there were three documented cases of sexual violence perpetrated by the Russian military in Bucha, Hostomel, and the village of Rohan in the Kharkiv region. However, according to the Commissioner for Human Rights Lyudmyla Denisova, there are hundreds of times more such cases – new data continue to reach the ombudsman’s hotline. Zaborona spoke with Halyna Maistruk, head of the Women’s Health and Family Planning charity, about how sexualized violence has become a tactic of war.

Sexual violence has always taken place during armed conflicts on all continents. It is not uncommon today – whether it be wars in the Congo, Colombia, Mali or Syria. At the same time, sexualized violence remains an “invisible” crime: feelings of guilt and shame, fear of revenge or taboos can prevent victims from revealing what happened and sharing their experiences.

Rape in war is often a means of psychological warfare designed to demoralize the enemy. In world history, there have been cases of individual rapes on the initiative of individual combatants, as well as mass rapes, which were deliberately organized by the leaders of the parties to the conflict.

In Lviv in 1941, German stormtroopers raped and killed 32 employees of a garment factory. The mass rape of women and girls in the villages of Galicia is also mentioned in the report of the Ukrainian insurgents in October 1943: “On October 21, 1943, pacification began in the Dolyna region. The pacification is being carried out by the 100-strong Sonderainzatz SD unit, composed exclusively of Uzbeks themselves, under the leadership of a security officer in the Dolyna region Pole Jarosz. […] After eating well and drinking moonshine, they looked for girls and young women. Women were raped where they were caught. There were dozens of cases of rape in the presence of relatives, who, terrorized, were placed in the corners, while the occupiers in the most refined way calmed their bestial instincts on their daughters. It is impossible to know about the number of cases of rape, because they are ashamed to admit them.”

At the same time, mass rapes are often used for the purpose of ethnic cleansing, for the complete destruction of one or another racial, national or religious group. Thus, during the Bosnian war, members of the Republika Srpska Army and Serb paramilitaries raped an estimated 20,000 to 50,000 Bosnian women. At the same time, there are 15-20 unregistered rapes per one registered rape. In fact, Serbs used sexualized violence as an instrument of terror and a key tactic in ethnic cleansing.

In an atmosphere of lawlessness and impunity during the war, commanders can openly incite soldiers to looting and robbery. Rape in such a situation is also perceived as a trophy or payment for participation in hostilities. In his book Rape During Civil War, Dar Kay Cohen, an associate professor of political science at Harvard University, points out that in some armed conflicts, gang rape becomes a ritual to accustom novice fighters to violence. This is especially true in patriarchal societies, where maturity and courage are associated with violence and domination, such as the Taliban in Afghanistan.

In 1988, for the first time in world history, the International Tribunal for Rwanda recognized rape as a possible act of genocide. In 2001, the International Criminal Tribunal for the Former Yugoslavia recognized the systematic mass rape of women as a crime against humanity. However, the UN Security Council has not been able to equate mass rape with war crimes. Several countries, including Russia, China and South Africa, opposed such a qualification. Representatives of these countries insisted that sexual violence could not be regarded as a threat to peace, which should be considered at a meeting of the Security Council.

To prove the power

Obstetrician-gynecologist Halyna Maistruk, who heads the Women’s Health and Family Planning charity and researches the topic of sexualized violence, compares the situation of mass rapes during the Russian war against Ukraine in 2022 to the actions of the Soviet army during the World War II.

There are many documented facts about how the NKVD raped Ukrainian women, especially in western Ukraine. Soldiers and guerrillas of the Ukrainian Insurgent Army recorded such cases and sent denunciations against Red Army and Soviet soldiers. One such report describes incidents in Ternopil region in March 1944: “When they get vodka, they drink to the point of losing their sanity. They throw their weapons, shoot in the house, roll on the ground. Women are being raped en masse at gunpoint. They line up to rape. 10-20 men go to one woman who is being raped. There are mass cases of 20 to 50 women being raped in one village.”

In turn, Soviet soldiers often described in their memoirs how and how many German womes they raped. Here, for example, is a quote from the memoirs of veteran Nikolai Nikulin: “Our scouts, who were at the observation post, took advantage of the lull and engaged in fun entertainment. They locked the owner and his wife in a closet, and then the whole platoon, in turn, began to rape the young daughters of the householders.” A German woman, familiar to Nikulin, jumped out of the window after the sexual violence committed against her by six tankers.

Writer Rafael Grugman in his book Woman and War. From Love to Violence cites excerpts from counterintelligence officer Vladimir Bogomolov from political reports for March-April 1945:

10.3.45 – Senior Lieutenant Abakov, being in a state of intoxication, committed violence against the German women. He gave the twenty-year-old German woman to drunken Red Army soldiers, and raped the fifteen-year-old Sharain Gertrude himself.

Sergeant Grenkov, being in a state of intoxication, on the night of April 14-15, 1945, entered the house of a local resident Domenyak Levkadia and, in her presence, under threat of murder, had sexual intercourse with her thirteen-year-old daughter Domenyak Yanina.

Estimates of the number of raped German women vary from several tens of thousands to several million. The American historian Dagmar Herzog believes that “one to two million rapes” by Soviet soldiers took place in the eastern zone of occupation.

According to Maistruk, the modern Russian military is the same offended Soviet soldier who hates everyone around him and is ready to shamelessly kill, rob and rape.

The expert notes that in wartime rapes are widespread and, as a rule, these are extremely traumatic and cynical cases. Sexual violence can occur in front of family members, thus becoming traumatic for witnesses of the incident, who may later blame themselves for not being able to save the person from violence.

Kyiv Region Police Chief Andriy Nebutov recounted how on March 9, 2022, several Russian soldiers raped a woman three times on the outskirts of a village 50 kilometers from Kyiv, threatening to kill her young child. A man trying to protect his family was shot dead in the backyard.

And the ombudsman Lyudmyla Denisova says that documents on mass rape are being collected in Bucha. “Approximately 25 girls and women, aged 14 to 24, were detained and regularly raped in the basement of a building in Bucha during the occupation. Nine of them got pregnant,” she says. “The Russian military has said they will continue to rape women until they can’t even think about sex – so that they never give birth to Ukrainian children.”

“In military conditions, rape is of a completely different nature. It has nothing to do with peacetime. Absolutely. If in peacetime this kind of violence is most likely to satisfy sexual needs, then rape in war has a very distant relation to sex,” adds Maistruk. “This is one of the ways to prove your power. It is a way of influencing the civilian population, designed to sow panic, fear, and a state of submission. This is done only for this purpose.”

Halyna Maistruk points out that the Ukrainian health care system was not ready for what was happening in the Russian-occupied territories. And in Ukrainian law there were no distinctions between sexualized violence in peacetime and during war.

“Only now is the Ministry of Health of Ukraine beginning to develop forms and questionnaires that doctors can use to describe and record cases of sexualized violence. In peacetime, a doctor could only establish and describe the fact of rape, but then a forensic expert’s opinion was still needed, because without it the evidence base would not work in court. Now the doctor must not just record, but also be able to confirm this situation. The process is complicated by the fact that in peacetime doctors rarely dealt with gang rapes. And even if this perpetrator can never be identified, a doctor’s opinion should be enough in order for this [fact of rape] to become a part of war crimes,” explains Halyna Maistruk.

Due to the ongoing hostilities, the verification of such crimes is extremely difficult. And obtaining statistics to submit to international courts can take years. According to the expert, Ukrainian society will suffer severe collective trauma, which it will have to deal with for a very long time.

“We have to live with it, because we will not get a large number of normally born children. It is possible that these girls and women [men and boys were also victims of sexual violence during the 2022 war] will never risk getting married. We don’t know the consequences. Especially when it goes hand in hand with shelling, death of loved ones, hunger, suffering,” said Maistruk.

She is also convinced that the facts of sexualized violence by the occupiers in Ukraine, which have become known now and will be revealed in the future, will strengthen the movement for women’s rights, as society will cease to be tolerant of violence. In addition, according to Maistruk, the law will oblige doctors to study very clearly not only sexual violence, but also domestic violence. Emergency planning will be introduced into the health care system, and outpatient clinics and gynecological offices of district hospitals will have stocks of basic medicines.