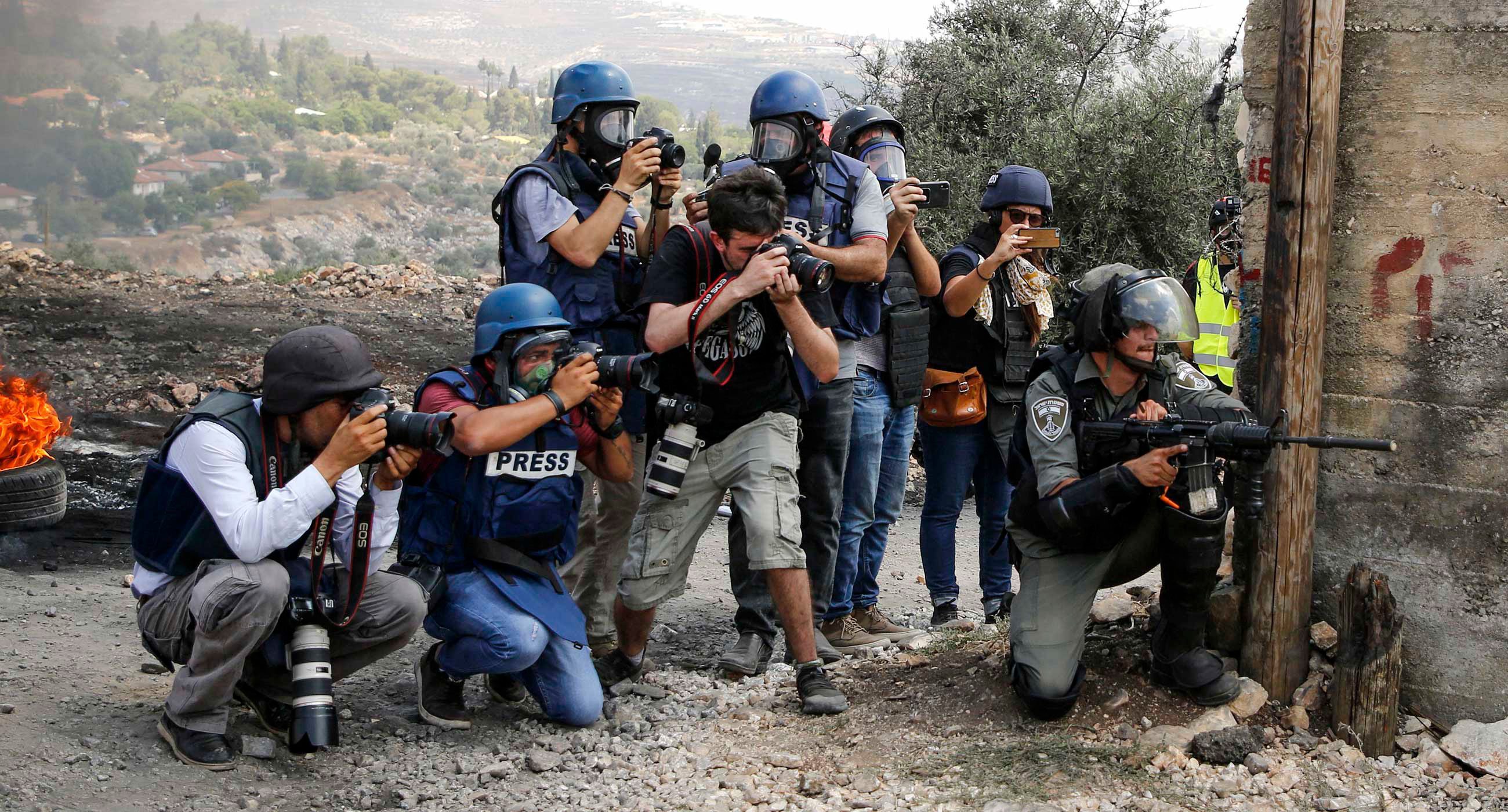 Photographers stand behind an Israeli soldier during clashes between Palestinian demonstrators and Israeli forces in the Israeli-occupied West Bank on July 19, 2019. Photo: JAAFAR ASHTIYEH / AFP via Getty Images

At the beginning of December, the most influential international foundation in the field of photojournalism, World Press Photo, announced the jury of the 67th competition. For the first time in the competition’s history, the head of the European jury was a Ukrainian — the founder of the Odesa Photo Days photo festival, Kateryna Radchenko. Ivan Chernichkin, Zaborona’s visual producer, spoke with her about the politicization of the competition, whether it is possible to cover the Ukrainian-Russian war and remain objective, and how a new photo-documentary is being created thanks to space satellites.

Before we move on to World Press Photo, tell us about your festival, Odesa Photo Days.

The first leading exhibition of the festival was on the study of the development of Odessa photography from the 19th century to 2015. Odesa Photo Days were held annually, except for 2022. Due to the pandemic in 2020, the festival was online — it was transferred to online mode literally in one week; everything was ready for the reception of guests and the opening of exhibitions, but Ukraine entered the pandemic in two weeks.

It is a complete volunteer festival — no team member received a fee for the first five years. It was a festival idea to offer the audience the highest quality events with the opportunities we had. And we had:

1) the opportunity to cooperate with various locations and platforms in Odesa;

2) cooperation with various foreign institutions that could provide us with materials, for example, for evening shows;

3) help with funding from various cultural institutions that could bring guests, photographers, or curators from their countries.

These were the three whales on which the festival was held. The fourth and main one is the people who organized the festival.

The number of visitors increased every year. When we started, it was an unknown festival: the professional community still needed to learn about us, and there was no desire to go to Odesa. 2018 was decisive when we managed to bring [American photographer] Alec Soth. All this influenced the fact that every year more and more participants and guests came to the event: from Moldova, Belarus, Poland, Korea, Turkey, and France.

The idea of the festival was that it should be free. In recent years, only the open call (competition for participation in the leading exhibition of the festival) has been paid, and this was the minimum rate. Master classes or lectures were always available and free of charge. The programs were developed to be exciting and accessible to different audiences. In 2018, we launched the Future Photo Days competition, which aimed to support young authors and allow them to show their work to the professional community.

You are the first Ukrainian woman to become a World Press Photo jury member. What does this mean for you personally and for the Ukrainian professional community?

Honestly, I still don’t understand what this means for the community and me.

To begin with, I was surprised to receive this invitation because despite how much I work with photography, I thought, and still think, that I am not a representative of the photojournalistic community. The main focus of my work is not tangential to documentary or reportage photography. It became my focus in connection with the war, but it had yet to be so in my previous practice. I tried to balance between different types of photography and engage in modern trends. Therefore, this invitation caused, at least, a surprise. On the other hand, quite a lot was done this year: both by me and by our festival. My name became visible, and many projects related to Ukrainian documentary photography were implemented. It somewhat balances my surprise.

When I received this news, I wrote that it was a big responsibility. It’s about more than just selecting quality materials. It is a political choice — a question of how certain events in the world are covered. The most important thing is the issue of finding and understanding manipulative projects. I don’t know how this procedure is carried out in the competition yet. There hasn’t been a session or briefing on how it will go. My concern is not to screw up when working with documentary photography; not to see manipulative practices: in the direction of visual manipulations — minimal correction; in the ideological order — the storytelling, the interpretation, and understanding of which will depend on the author’s point of view.

Do you think that you were invited solely because of the war in Ukraine?

There are two reasons. The Odesa festival grew. In the first three months of the war, we received very, very many requests for photographers’ contacts or their materials from various professional photography and media platforms. The number was crazy. Another reason is our activity this year. From February 24 to June, we held 60 events: publications, exhibitions, conversations, and conferences. From June to today, there have been 40 more events. These are crazy indicators; in ordinary life, this would not happen. We present Ukrainian photography at Paris Photo, and in d’Arles, we make publications devoted only to the war and the history of Ukrainian photography. If there had been no escalation, it would have taken several more years. It was a plus for another two or three years and happened too quickly.

How often have you had to deal with the involvement and opportunism of the jury or competition organizers?

You can combine this with why the same photographers are often represented at different festivals. Every year, lists of the best 10 or 20 authors are informally formed, whose names begin to appear at various festivals, especially in Europe. By inviting a famous author, the authority of the event rises. It’s there; I can see it. It has been discussed for the past 5 years among the professional community — that the point of traveling to various events is being lost. It is enough to go to one and only one festival to see what is happening there because the next one will obviously be the same.

Times 100 best photos published. In a week, the media will issue selections of the best photos. The 2022 photojournalism pool will be formed before the WPP submissions close. How to distance yourself from already created hierarchies?

That pressure is there. It’s a question of how much the jury pool will fight. I was at one competition in the jury, where it was necessary to choose a finalist who received a big prize. The votes were divided between two authors, one of which was the absolute priority of the institution that invited us. There was a lengthy discussion, but the jury won -— we chose another winner, not the one expected by the institution. And it was a question of how much the jury was ready to fight and defend its position. It is a matter of argumentation and communication within the team itself. Will it be so in our case [at World Press Photo]? I do not know.

After I was invited to the jury, I decided not to watch any selections because I didn’t want to feel the influence of the media. But I am worried not even about the selections but about the evaluation of Ukrainian authors — how to maintain an emotional distance.

Let’s talk about propaganda in photography. It seems that the photograph does not lie — the photographer or editor who uses it, putting meaning into it, lies. WPP enjoys the highest journalistic standards and has always positioned itself as the flagship of journalistic documentary truth. How can it be 100% objective and non-committal, especially post-truth times?

Photographers who shoot war or any conflict somehow have a greater emotional attachment to one or the other side. It is challenging to keep a distance, to record what is happening from a distance. It’s one thing when you find yourself in a one-day event with a camera, and maybe you don’t have time to find out what’s going on, who’s on which side — you shoot the conflict that’s happening here, and now, it’s a quick reaction.

It is entirely different when we talk about a long-term event in which you are maximally involved as an author. You already have your own stories, contacts, and communication. It is incredibly difficult to say that this can be a 100% objective coverage of the situation. Naturally, documentarians try to cover the event from different angles (ideally, when there is such an opportunity). If we are talking about our war, then this possibility is almost non-existent. Fewer photographers can work in Russia. We know very well what conditions are behind it. It is a completely rhetorical question — to what extent they can actually film what is happening on the other side. It is undeniable that everything happens there through control, verification, and censorship.

Will you build a framework for self-censorship?

I need clarification on what censorship can be in documentary photography. If there is a document or coverage of a situation, even if it is dire, it has been documented and should be shown.

I would make a distinction: one thing is to work with alternative ways [of storytelling and representation], media, and searches for visual communication; the other is a question of conceptualization. When discussing conceptualization, it does not necessarily rely on direct photography; it can be a work with any associative forms or allegories. It is more characteristic of art photography and works with indirect photography. As technologies change, approaches change. Accordingly, it somehow affects the evolution of visual speech. But if it is only a change of this visualization, but at the same time, we are working with direct photography, then it seems to me that it can remain within the framework of a documentary. These are just new modern approaches, which are obvious, in my opinion. It is impossible to get rid of them in technological development.

Is it still documentary photography if we work with direct photography and use associative visual codes?

Yes — if we work with a direct photo but use different methods of fixing this direct photo without manipulation.

For example, the same Google View, satellite images. When the author is not a direct observer and active participant in the event, when a photograph can be created remotely, it remains within the boundaries of the new documentary.

Another case is if the author wants to talk about the war but needs to be an active observer and turns into photographing some associations that are no longer direct images of the war. It is already art photography, indirect photography when the author’s idea and concept become primary.

Why do you think conceptual photography needs to catch up to straight photography?

It is because the art sector, art photography, needs time and space. The author’s impulse and the conceptualization of some events need time for reflection. Being in Ukraine, living in the epicenter of events, it is almost impossible to reflect and have space for analysis. But events change so quickly that recording this change is more critical and a priority. Even artists who worked with art photography before the escalation are changing approaches and trying to document the changes using almost direct photography.

It is about feeling the need for quick reaction and documentation on a personal level because tomorrow it will be different; it is a desire to collect an archive of events and changes. Then there will be the question that perhaps these artists will return to the process of reflection and creation of art objects, but it will be much later. It is precisely why this safe space for analysis is needed. In the process, when everything around you is changing so quickly, it is simply impossible.