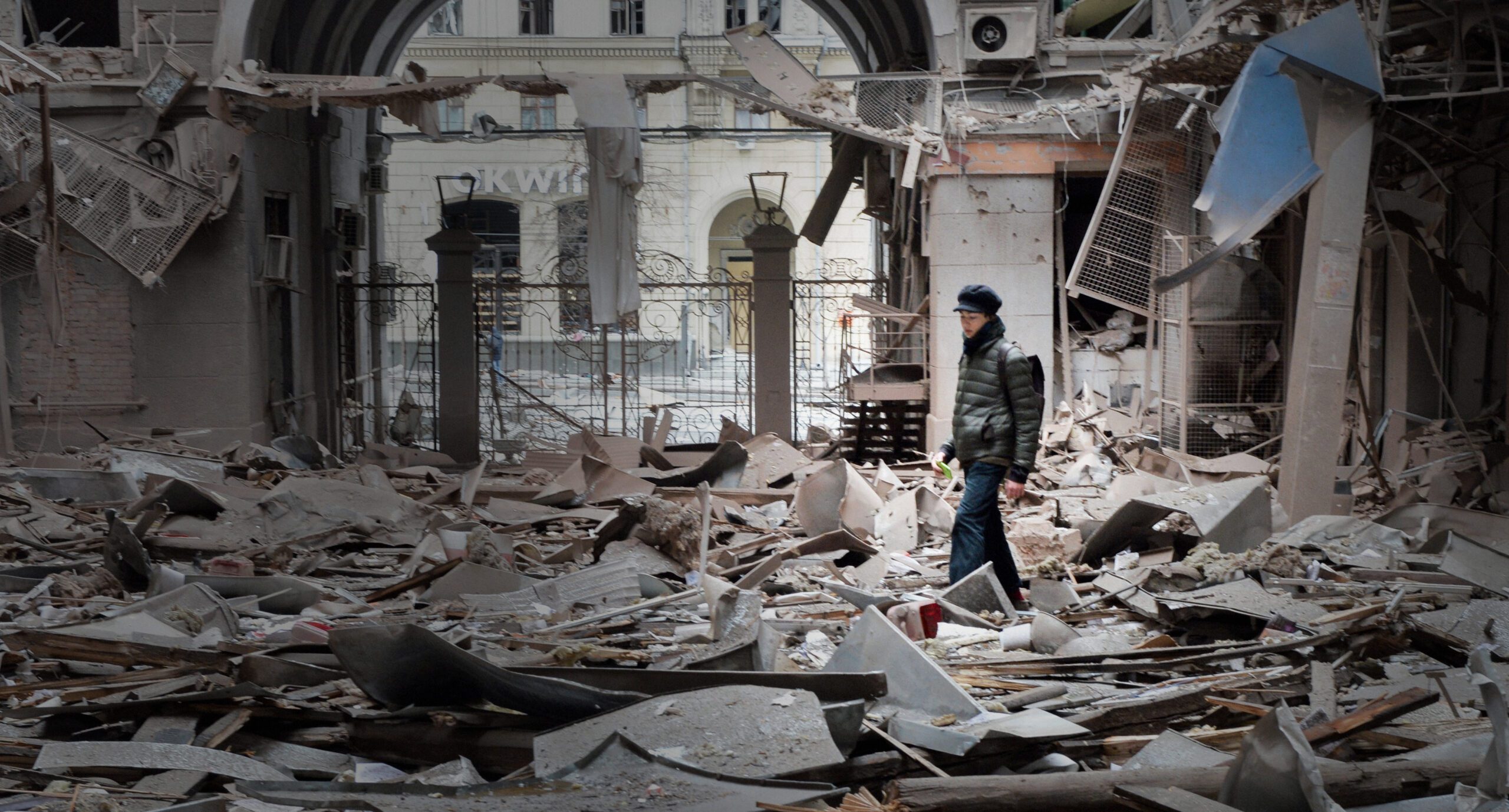 On February 24, Russia attacked Ukraine. The occupiers are violating all the rules of war and the Geneva Convention by using banned bombs (here we wrote what the occupiers are trying to do in the cities). One of the worst situations is in Kharkiv. We talked to a young woman who has remained there and who is trying to survive and help others.

For me, it all started a few days before February 24. There was a lot of disturbing news and thoughts. On February 23, thank God, I had a session with my psychotherapist, with whom I shared my worries and fears about the war. I was very worried that hostilities could begin both in Kharkiv and in Odesa, where my mother lives. I did not know how to act, nor how to save myself and my mother at the same time. The experience led to hysteria. The psychotherapist said that my fears were valid and that such a scenario was possible.

Therefore, we discussed plans and ways to act in the event of war. On the evening of February 23, I fell asleep in my chair at home and accidentally flooded my downstairs neighbor because I had been filling the bath. At 11 pm, the owner of the apartment called me and asked what was going on and why water was leaking down from the neighbor’s ceiling. The next day we ironized about this because, with the onset of war, no one wanted to deal with the matter. That is, in fact, we were “saved” and now do not have to pay our neighbor’s repairs.

At about 5:30 am, on February 24, my friend Evelina in Odesa urgently called me. I woke up not understanding what was happening and thought that I had called her accidentally. Well, that’s how I found out that everything is shit and we are being shot at.

The first hours were all shock and panic, but I pulled myself together. My mother was in Odesa, and we quickly discussed a plan of action. My neighbor, with whom I rented my apartment, collected things, cried, and supported one other. Then members of the company where I work gathered in the office to discuss a possible evacuation plan. The management had three cars ready to leave, but it was not possible to evacuate because of ongoing fighting on the arterial road. We decided that if we have the opportunity, we will work.

When I returned home, I quickly calmed down. I went through something similar 8 years ago and was less confused than most people around me. I understood that now there will be panic, that now everyone will try to flee, that there will be large traffic jams near the city, and that maybe we will be fired at. So, I decided to wait, to see how things go, and then to decide. I gathered documents together, threw a couple of things and everything my cat needed into a backpack, and resolved to give myself time to come to my senses.

Giving myself time to be afraid, to experience this fear, panic, rage, grief – this was, in my opinion, the right decision. In such a situation, you cannot rush into decisions or actions, because your mind needs to recover. I decided to stay in Kharkiv, although my family discussed this decision with me several times a day. But in the end, I realized that losing a home, important people, things, and moral support would be a more traumatic experience for me than being here under fire. Here everything is familiar, everything is my own and sustains me.

I have thought a lot these days that the war in 2014 stole from me not only my own home, not only my family but also 7 years of my life. This is because it was very difficult to start doing something at first and to believe this was finally home. I even concluded that 2021 was the year when I breathed a bit easier and finally found a good job, finally started earning some decent money, arranging my home the way I like, buying appliances for the place.

For the first time since 2014, I started buying books because it is a very resourceful thing—to have one’s own library at home, and I love it. But after 2014, it is also scary to do that, because you understand that if you must run, books are not something you would take first, and you must leave them again. That is, books were for me an indicator of a peaceful life. I realized that I was not ready to say goodbye to all this and decided to give this war at least another day of my life. I must live right now.

I observed that “grads” or artillery were not as frightening as aircraft; because when a plane flies over us, it is very loud. These are probably the most terrifying sounds of war I have ever heard. During air raids, people take cover in the basement of our building. This is a small room literally 15-17 meters, flooded with water up to the ankles, with a horrible stench of sewage, and without ventilation. During the shelling, 20 to 30 people are packed in there, so you can only stand – it is not possible to sit, lie down, or to arrange anything, it is very difficult. In addition, the door to this room is very narrow – if there is mass panic, people will get crushed. That is why we do not go to the basement.

There is also an option to walk to the metro station, which is located 700 meters from our home. In peacetime, you can get there on foot in 5-7 minutes. However, now, if there is an air-raid siren and if you need to take a cat in a carrier, a backpack, a mat, this path is very difficult, you carry all these things and move more slowly. And given that the shelling can begin very suddenly and unexpectedly, there is a chance you might not make it there. Hoping that the projectiles do not hit, we decided to stay at home and locate the safest place in the apartment.

By the third day, I had adapted, and I was ready not only to do something at the computer but also to go outside, so I went to the headquarters of the territorial defense of our city to offer my help. I knew that I could not take up arms, because one, I do not know how, two, I do not want to, and three, no one will give them to me under such conditions. I have my hands and my head is quite lucid, so I decided that I could help coordinate, prepare food, pack something, transmit things to organizations, and organize volunteers. In territorial defense, they said that people were needed to feed the soldiers, so I spent the day in the kitchen. We fed close to 400 soldiers in about 6-7 hours.

From the first day of Russia’s attack on Ukraine, several of my acquaintances from Russia wrote me stupid things such as “how are you,” “praying for you,” “we stand with you,” “sending you rays of hope.” I replied to all this harshly – not to each person, but I wrote a post to everyone at once, and I was certain that many of them had already read something similar. I repeat from time to time that “guys, you are not with us, you sleep in your peaceful lodgings, you take your children to school or to kindergarten, not to bomb shelters, and we see your rays of support every day – they come flying in, thank you, received.” I write all this not so much to convince them of something or to embarrass them in some way – fuck them, let them live as they want, they have already screwed up their country. I do this for myself so that I never forget why I have nothing and will never have anything in common with these people because after 2014 I forgot.

My psychotherapist advised me to sign up with a group of professional psychotherapists, who are now being trained in the Israeli protocol to help people in crisis situations. In the evenings I take lessons and they help me – it is a sort of routine; I understand that at 10 pm I need to be at home. I will see people, who I like, and I will do work that is interesting and normal. In such circumstances, it is important to do something normal for the psyche, because when everything goes awry and you realize that life is ruined, you need to find at least something normal.