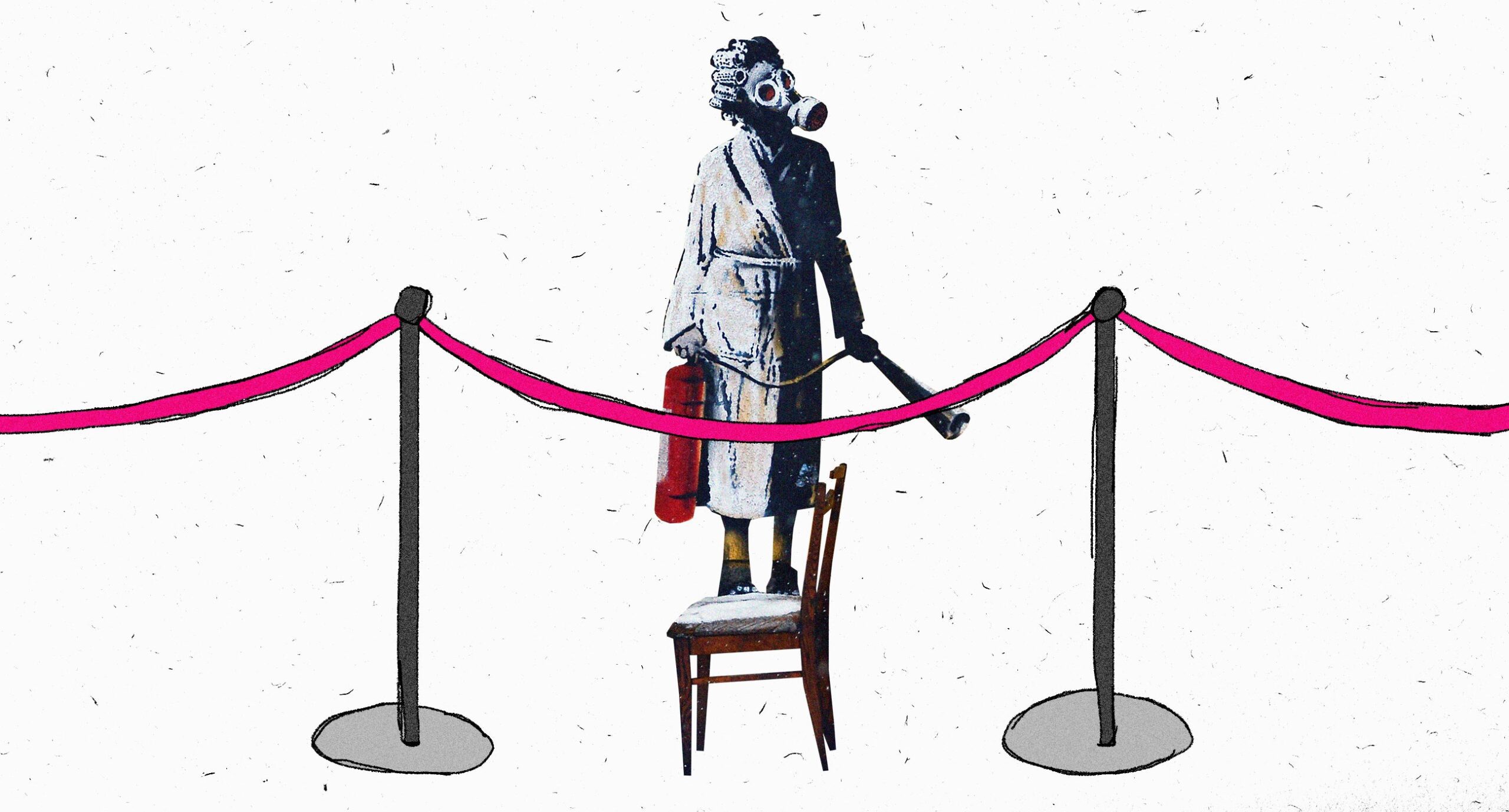 In November 2022, the anonymous British artist Banksy visited the Kyiv region and painted seven murals. Residents cut down one graffiti depicted in Gostomel on the house under demolition in order, they say, to buy cars for the Ukrainian military. However, both residents of the destroyed building and local authorities claimed the right to stencil graffiti, after which the police opened criminal proceedings. Zaborona talked to art critics and activists and will tell who owns the rights to Banksy’s painting and how the artist himself reacts to the use of his work.

“Woman in a gas mask”

Having learned that one of the buildings where Banksy created a mural with a woman in a gas mask was planned to be demolished, volunteer Serhiy Dovhy decided to cut the image and, according to him, sell it at one of the international auctions of Sotheby’s [one of the oldest auction houses in the world, that’s where they sell works by Banksy — editor’s note]. He insists on giving the invaded money to the needs of the front. Dovhy and his friends documented the preparation for dismantling the graffiti on tape to confirm his intentions and apologize to Banksy later.

However, Serhiy did not inform the residents of the military town or the local authorities about his plans. Dovhy believed that graffiti does not belong to anyone. After all, Banksy painted it on a destroyed house that had no inhabitants. On December 2, he and his friend cut off part of the insulation from the wall. Still, soon after, representatives of the National Guard approached the men and called the patrol police (officials of the Gostomel Military Settlement Council also arrived). After a formal interrogation, Banksy’s work was confiscated, and Serhiy Dovhy was released. However, proceedings were opened under the article on intentional damage to property (Article 194 of the Criminal Code). The graffiti was valued at 9 million hryvnias, and the suspect faces up to 12 years in prison. Also, Serhiy Dovhy was informed of the suspicion of a completed attempt to secretly steal someone else’s property in particularly large quantities under martial law.

The residents of the building and the Gostomel Military Administration claimed the rights to the Banksy mural. On November 18, the head of the GMA, Serhiy Borysyuk, announced that he decided to preserve Banksy’s works in Gostomel and nearby Gorenka, where the artist painted a man taking a bath in a destroyed house. On November 25, Borysyuk recognized “The Woman in a Gas Mask” as a cultural property of Gostomel. Also, on December 1, supposedly the day before Serhiy Dovhy cut down the graffiti, Banksy’s drawing was taken into account by the culture department of the Gostomel settlement council.

Is there legislation in Ukraine that would protect murals from destruction? And in general, are they considered cultural heritage?

In Ukraine, no single law exists on the State Register of National Cultural Property. Likewise, no law would protect murals or graffiti and include them in the cultural heritage list. Olga Balashova, an art critic and co-founder of the Museum of Contemporary Art NGO, says in a conversation with Zaborona that for the first time in the history of the Ukrainian state, the artistic community and the government have switched places: the government is trying to preserve something, not destroy it.

“In the artistic community, everyone understands that street art has its laws. Street art is not legal. Relatively speaking, Banksy, who works with street art, is ready for his work to disappear; this readiness is an axiom for a street artist. When he creates illegal drawings, he understands that they can be painted and destroyed — and this will not be an “act of vandalism.” It is the meaning of his work: to see how it will live on, how other people on the street will communicate with her. But Banksy’s street art turned out to be valuable and an attraction for our authorities, who reacted to the name and status of the star, and voila — now the state wants to preserve the masterpiece. It is where the disagreement is because “there” they do not understand the nature of this artistic phenomenon and how to work with it. And it turns out that the state is punishing people who acted entirely within the framework of the unwritten street art convention,” the art critic explains.

Olha Balashova emphasizes that the artistic community always tries to preserve cultural heritage. Still, the situation with Banksy’s image revealed several problems in Ukraine’s cultural heritage protection field. During the years of independence, the specialized field of consultants who would have expertise in preserving monuments was destroyed in the country. There are no architectural restorers in the country who know how to protect and restore the facade properly.

Balashova says that there is also no legal framework in Ukraine that would explain how monuments can be preserved or, for example, prosecute people who damage material heritage. But there is no procedure for bringing them to justice. The system that is supposed to protect monuments does not correspond to modern realities: there was no update for many years, so graffiti, murals, or street art do not fall under the category of heritage, so they are not on the list of registered monuments.

“All the power of our bureaucracy is trying to protect Banksy, which is impossible if you focus only on Banksy. And the only thing that can be done is to impose criminal proceedings on people who, conditionally, wanted the same thing — to save the image. In any case, no one would legally sell this work; this would require the author’s permission. If Banksy’s work is cut from the wall, and the author knows nothing about it, he removes it from the catalog and says it is no longer his work. It is a common practice for artists to deny authorship of their works for one reason or another. If this is not Banksy’s work, but just a piece of insulation, why should a person be judged?” says Olga Balashova.

And who owns the rights to the mural — the author or the owner of the building?

In Ukraine, a law called “On copyright and related rights” protects the rights of authors related to the creation and use of works of literature, science, and art. For a mural to be protected, it must meet two criteria: to have a material form and to be the result of creative activity.

According to these criteria, the mural is protected by copyright, so the author has the right to use his work and prohibit or allow others to do so. There are two forms of mural copyright infringement: unauthorized mural reproduction for commercial purposes and destruction of the wall or building where it was painted. In the latter case, it is more difficult to determine the authorship because the image belongs to one person, and the wall belongs to another.

However, the mural’s author has the right to separate and redeem the image before destruction. Thus, the owner of the object on which the mural is painted is obliged to offer the copyright owner to buy back the image at the cost of the materials (at the expense of bricks and paint). There is no such practice in Ukraine yet, but it is often worldwide. Some drawings are included in the list of cultural heritage, and because of this, the building is challenging to sell. Therefore, the owners literally asked to take away the great art from them. In this regard, whole exhibitions of “stolen Banksy works” are appearing in Britain and many other countries — with pieces of walls from all over the world.

Also, the mural’s author has the right to the last photo. Before destroying the mural, the wall owner must warn the author and allow him to take the last shot of the graffiti. Violation of this right is taken into account by the Ukrainian court. It was the case with the artist Volodymyr Kuznetsov, whose picture is “Koliivshchyna. Last Judgment” — destroyed by “Art Arsenal” in July 2013 on the eve of Viktor Yanukovych’s visit. Although the artist photographed the mural himself, “Art Arsenal” did not ask the author to copy it before its destruction. The court obliged the cultural center to pay the author 1,000 hryvnias in compensation.

Who has the right to Banksy’s painting — him or the owners of the building?

According to public activist Serhiy Shchelkunov, the topic of street art is new in modern discourse, so many questions remain in the zone of uncertainty, particularly regarding the ownership of street art.

“Banksy wanted to express his admiration for how the citizens of Ukraine are heroically enduring the trials of war. He confirms it by the fact that the artist, in his way, understood aspects of the participation of the civilian population and converted his informational and creative potential into art objects. This way, he wanted to show support and donate this object to the community. The community affected by the war is a co-author of this object because it generates one of the most important aspects of street art — context. That is, it is not only about the community, for the community, but the community itself created it. Therefore, in my opinion, the owner of the art object, in this case, is the community,” Shchelkunov believes.

The situation with Banksy’s mural, according to Shchelkunov, is a conflict of ownership of various subjects involved concerning the art object. In the legal field, on the one hand, the owner of the graffiti is Banksy, so according to the law, the murals have been covered by copyright for 70 years. Copyrights for wall paintings do not need to be registered with the agency; only the artist or a person authorized by him can dispose of these rights.

Although Banksy has the rights to his works, he created them on someone else’s property without permission and did not specify what manipulations with his work are permissible. Therefore, the house residents insist that the mural with a woman in a gas mask belongs to them. On the one hand, the owners of the house can dispose of the wall as they like, and the artist cannot challenge this right; on the other hand, the owner of the house cannot destroy the house without compensating the author for a price that does not exceed the cost of the materials spent on its creation.

Also, the artist’s actions can be classified according to the law of Ukraine as a gift that took place without the prior consent of the owner of the house. Therefore, if the owner of the building does not immediately declare a refusal to accept such a gift, the gift is accepted, and ownership is transferred to the owner of the building. However, the house had to be demolished, so the right of ownership ceases when the property is destroyed — in this case, the owners of the destroyed house have no right to the artist’s work.

In the end, the owner of the mural may be the administration because the author of the stencil hides behind a pseudonym, and there might not be someone who represents Banksy’s interests. In this case, the works of Banksy are property without an owner, the actual owner of which is unknown. In Ukrainian legislation, these works can be transferred to communal ownership by a court decision.

“In an ideal world, the community should decide on the protection of the object and give instructions to the local administration to implement measures that would satisfy the request of the owner of the art object — the community,” the activist explains. “Next, according to logic, the administration should take measures for physical preservation and initiate a legislative process through party representatives in the parliament, where specialists would develop a state standard for such relations and situations.”