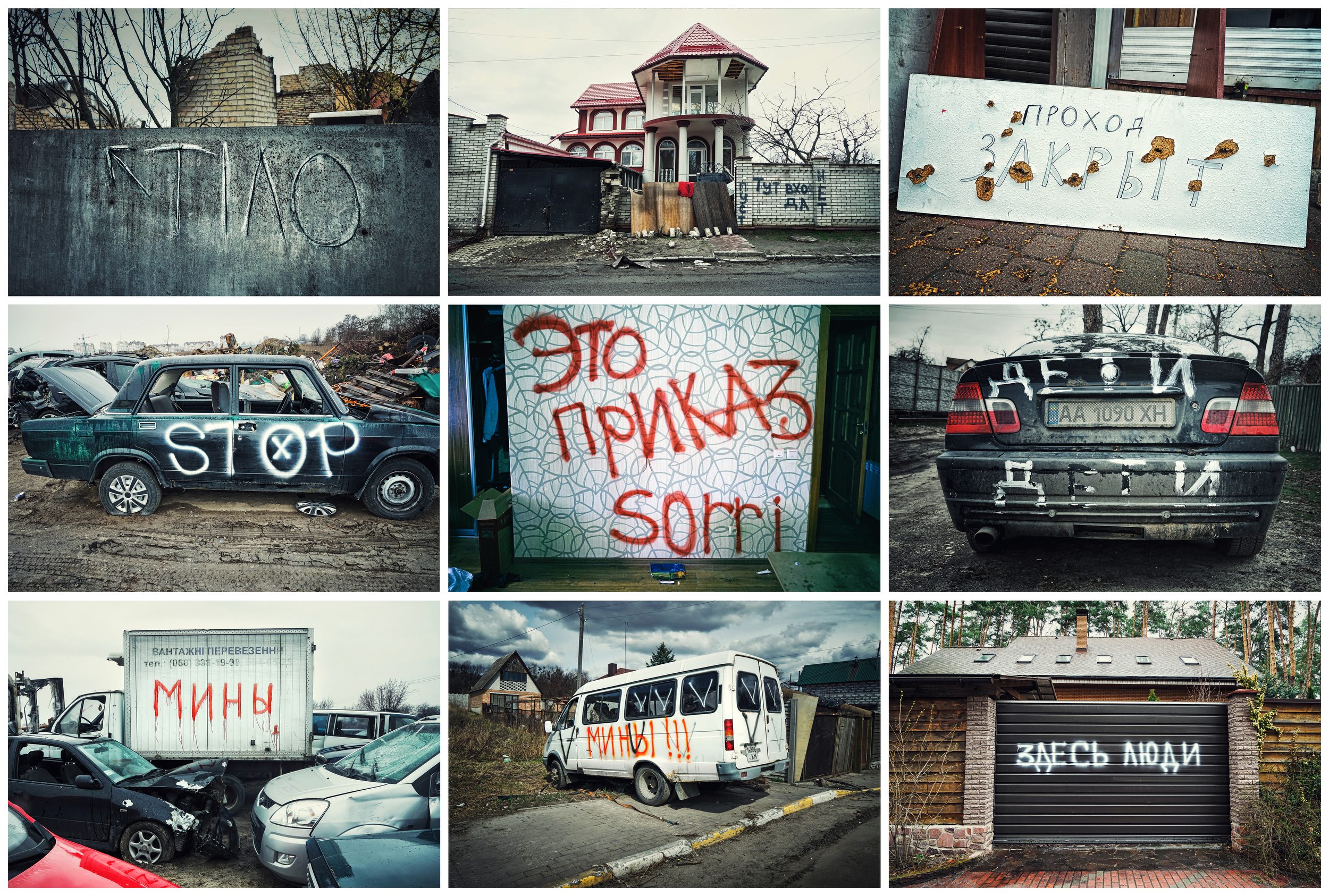 The collage of signs on the cars and building in Bucha after it was liberated by Ukrainian forces. The signs read from bottom left side to right: "Body", "Empty. There is no entrance here", "The entry is closed", "Stop", "It is an order. Sorry", "Children", "Mines", "Mines", "There are civilians here". Ukraine, April 2022. Photo: Alena Grom

A team of Ukrainian journalists and photographers has started work on the creation of a digital photo archive about Russian invasion of Ukraine. It will support photojournalists who risk their lives to cover the horrors of war, as well as authenticate testimonies of Russian war crimes in Ukraine.

Zaborona talks about a crucial media project about the war in Ukraine.

Ukrainian Warchive: what is this project about

An easy-to-use interactive platform will preserve important evidences of the Russian invasion. Also, it will create a trustable source of material for media, civil society organizations and investigators. The platform allows the readers to search the large photography collection by date, location, author and themes.

The project was initiated by Ukrainian photographers Misha Pedan and Emine Ziyatdinova, as well as co-founder of Zaborona Kateryna Sergatskova and co-founder of Bird in Flight Yevhen Safonov. “Today we are witnessing not only Russian missiles trying to destroy Ukrainian cities, but also how, at the level of official propaganda, the Russian dictatorship distorts, tries to erase history. It denies the existence of Ukrainian culture as such. The idea of the archive is to preserve photo evidence of the war, already now, together with the stories of their creation,” says Misha Pedan.

The creators also aim to support professional photographers who boldly cover war events in Ukraine and often risk their lives. As of June 29, 2022, there here have already been 33 deaths of journalists in the war. Eight of them were killed in the line of duty.

The development of the project was supported by the Swedish Institute and the Hasselblad Foundation. The second one awards one of the world’s most prestigious photo prizes — The Hasselblad Foundation International Award in Photography. Besides, the initiators of Ukrainian Warchive expect to attract additional interest to the work of Ukrainian photographers from other world media, foundations and institutions.

Earlier, Zaborona informed about our friends’ project Saveualist. It is an Internet portal with comprehensive information on the weapons that Ukraine needs to fight Russia. The resource was created by a group of Ukrainian volunteers, entrepreneurs and military experts.