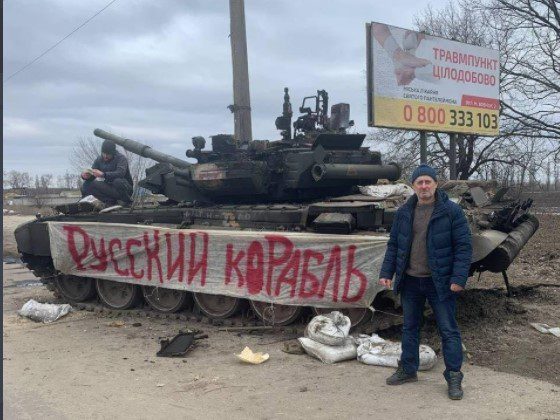 Marines, border guards, the crew of a civilian ship and priests were taken prisoner by the Russian occupiers. We are talking about the defenders of Zmiinyi Snake Island and the mission sent to rescue them. The exact number of Ukrainians captured by Russia, the conditions in which they are being held and whether they have been tortured is currently unknown.

Zaborona shares the facts of the history of Zmiinyi island and the information received from the Ukrainian Navy.

Zmiinyi island: Ukrainians are alive, but in captivity

On February 24, 2022, the first day of Russia’s full-scale invasion to Ukraine, a Russian warship approached Ukrainian island Zmiinyi with a demand to surrender. She received a response from the border guards, which became a slogan for Ukrainians and the world in this war: «Russian warship — go fuck yourself». The island was shelled and the infrastructure completely destroyed. Communication with the defenders was lost, all of them were considered dead.

According to the public relations service of the Ukrainian Navy, the marines and border guards who bravely defended the island are alive, but are in captivity.

«The constant shelling of the island and its surroundings did not allow the rescue ships to approach. In order to carry out the humanitarian mission, a civilian ship Sapfir was sent to help the possible wounded. Few priests agreed to leave with the crew. However, the civilian ship was seized by the Russians, which is another indisputable fact of war crimes committed by Russia in Ukraine», — the Ukrainian Navy said.

Ukraine demands the return of its citizens immediately and calls the world community to help.

Earlier, Zaborona spoke about how to help the Ukrainian defenders, volunteers and doctors.