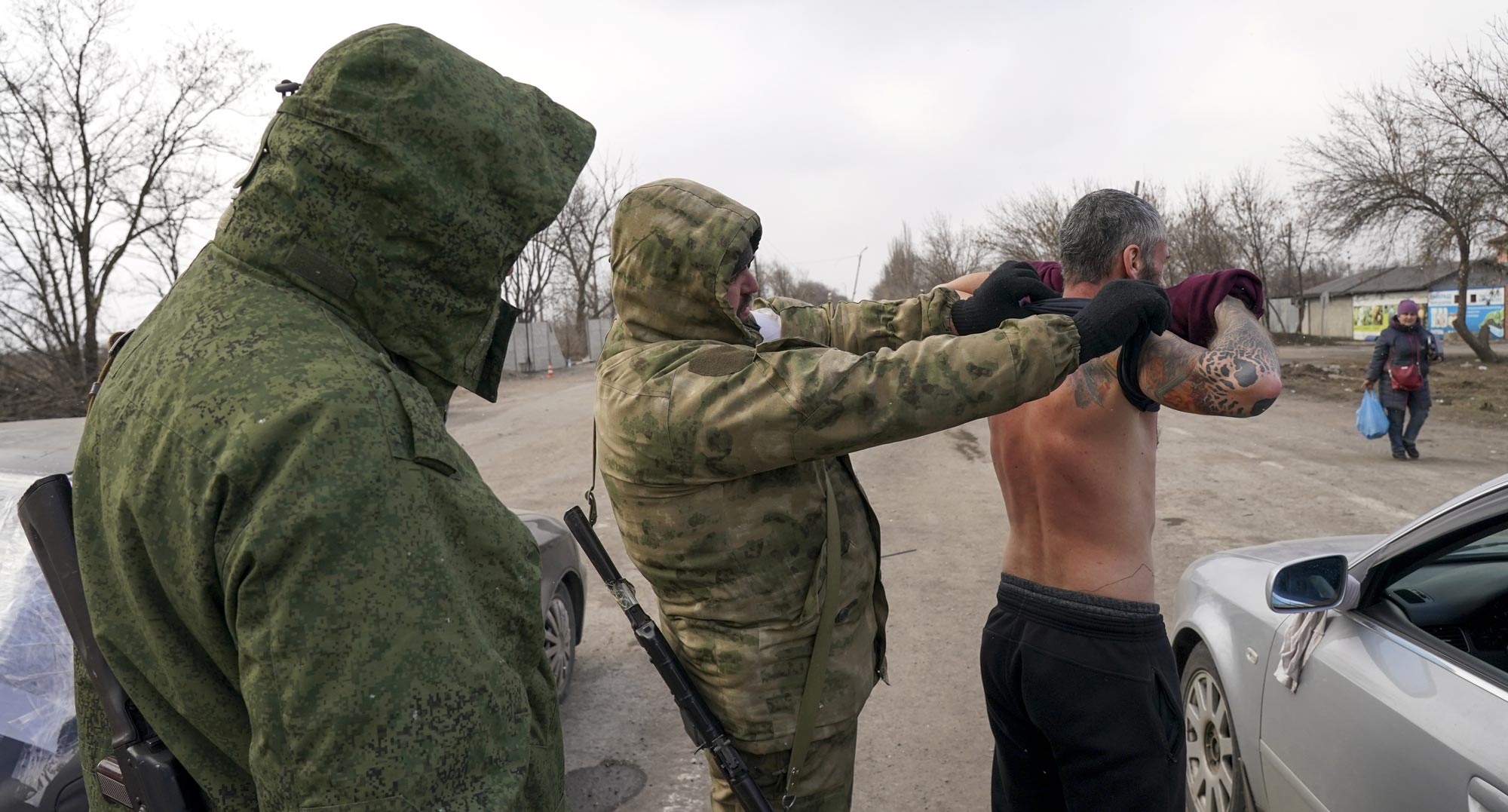 Russians are searching a civilian trying to leave Mariupol at a checkpoint on March 20, 2022. Photo: Stringer / Anadolu Agency via Getty Images

Since the beginning of the Russian invasion of Ukraine, the reports of abductions of people by the Russian occupiers appeared almost daily. The victims are mostly journalists, activists and mayors. The ZMINA Human Rights Center, which collects information on missing persons, has data on 50 cases. And in the case of Mariupol, which the occupiers have been keeping in the ring for a long time, residents are forcibly deported to Russia.

Zaborona journalist Anastasiya Opryshchenko spoke with Ukrainians who are trying to bring back their relatives who fell into the hands of the occupiers.

On March 1, 2022, Ukraine and Russia held the first prisoner exchange: five Sumy Territorial Defense members were exchanged for an Omsk officer. Since then, many hostages have been found on both sides, including dozens of soldiers from Snake Island, which the occupiers captured on the first day of a full-scale war.

On March 28, Volodymyr Zelensky announced that Ukraine was ready for new exchange and the Ukrainian military was compiling lists of captured and killed Russian soldiers. According to him, these lists have already been handed over to the Russian side. In addition, Ukraine is making lists of its soldiers who may be held captive.

One of them is 33-year-old Oleksiy Kapeliushny from Dnipro. He served in the 25th Brigade as a signaller to the fire support company of the 2nd Parachute Battalion. Along with Oleksiy, his wife Iryna Kozhemyaka was also in the service. The last time they got in touch was at 3:30 p.m. on March 18. Kapelyushny had been in the Joint Forces Operation zone in Donbas for two weeks. Iryna received the next information about her husband from his sister – her number was the only one that Oleksiy knew by heart.

“She said that Oleksiy was taken prisoner to the temporarily occupied territory of the DNR [unrecognized Donetsk People’s Republic] in the city of Horlivka. This information was told to her by an employee of one of the Horlivka hospitals, where Oleksiy was sent. According to him, the patient had his left limb amputated. He is alive, but very weak physically,” Iryna Kozhemyaka told.

Beginning on March 18, the family received all the information about Oleksiy from a hospital employee – he kept in touch from time to time on his working shifts. However, there has been no call from him during the last week.

“All we know now is that all the prisoners will eventually be released, but that’s all,” says Iryna. “We were also told that my husband was under moral pressure from the Russian military in the hospital.”

At the Dnipro regional military enlistment office, the prisoner’s wife was told that Oleksiy was on the exchange lists. She has no other information at the moment: a week ago Iryna submitted inquiries to the SBU and volunteer organizations, but never received an answer. Appeals to the local military enlistment office and the military unit where Kapeliushny served did not help either.

“We are all waiting for him,” said Iryna Kozhemyaka. “Yes, I’m afraid he is wounded and weak. I want to take him to a hospital, where he will be treated well.”

Vitaliy Zagrebin, 59, who lived in the town of Borodyanka, Kyiv region before the war, was taken to Belarus. According to his son Volodymyr Zagrebin, seven other people were taken away together with Vitaliy. They have been staying in Belarus since March 16.

“My father worked in Borodyanka, fixing electricity. Several other women worked with him in the kitchen”, Volodymyr Zagrebin explains to Zaborona. “At the beginning of the war, all the staff hid in the house. But then the Chechens came to the town and took everyone to Belarus, to the Golden Sands sanatorium in the Gomel region, allegedly linked with the Red Cross. They are fed a little there and given one or two phone numbers for relatives to contact.”

The Belarusian authorities also told about Ukrainians in the Gomel region. On March 12, the Border Committee reported on 77 Ukrainians who entered the country, but there was no talk of forcible deportation: “Some foreigners went to relatives living in our country. Others are temporarily housed in hotels and sanatoriums in the Gomel region.”

Vitaliy Zagrebin’s son tells Zaborona that the captured Ukrainians tried to leave on their own, but they only had internal Ukrainian passports, so Belarusian border guards did not allow them to go. The same situation is on the border with Poland, which Vitaliy’s colleagues tried unsuccessfully to cross. Belarusian border guards state prisoners must resolve all issues with Ukrainian consuls, but Zagrebin said consuls have not been able to settle this for two weeks.

“All relocations and overnight stays outside this sanatorium could be organized only at your own expense. Even before the beginning of the captivity, the military took the foreign currency from my father and others – leaving only the hryvnia, which was enough for a few days. To help them in Belarus, the Red Cross opened foreign currency accounts so that their employer could transfer some money from Ukraine, but father did not receive anything,” says Volodymyr.

Volodymyr Zagrebin says his father is trying to relocate to Poland with the help of the Red Cross but is still waiting in line because there are many people who want to return home.

Yulia Prysada, a close friend of the military Mykola Horobchenko, also contacted Zaborona during the preparation of the article. The 28-year-old Ukrainian served in Mariupol in the military unit 3057 – according to his friends, in the second company. Among his colleagues, he was called “Morpikh” (Ukrainian word for “Marine”). During the Russian military invasion of Mariupol, he was taken prisoner by the Kadyrovites. According to his close friends, Mykola was beaten and forced to call on Ukrainians to surrender.

This video was sent to Mykola’s wife by one of the Kadyrovites in late March. He said they were planning to kill the Ukrainian and asked to give regards to the prisoner. On March 27, his wife was told that Mykola had been killed. But there is still no confirmation of the husband’s death other than the words of his wife and friends.

How are lists of prisoners formed?

Alla Kotenko, a spokeswoman for the Patriot Group NGO, explains that due to full-scale military action, some ministries are now working remotely. The Patriot Group has been involved in exchanges since 2014 and is now also offering its assistance to Ukrainians.

The spokeswoman told Zaborona that the main thing was to collect all the data from relatives. No matter in what form: they can just write in the organization’s messenger, and so will already help to make a statement about the disappearance of a person.

“The organization has its own hotline, we accept calls from people giving the information about the military or civilians and then pass it to the SBU, the center for the release and exchange of prisoners. This is how lists are formed, but our further actions as a public organization end there,” Alla Kotenko emphasizes.

You can contact the organization at the following phone numbers:

Earlier, Zaborona informed who else you can call if your relatives were taken prisoner.