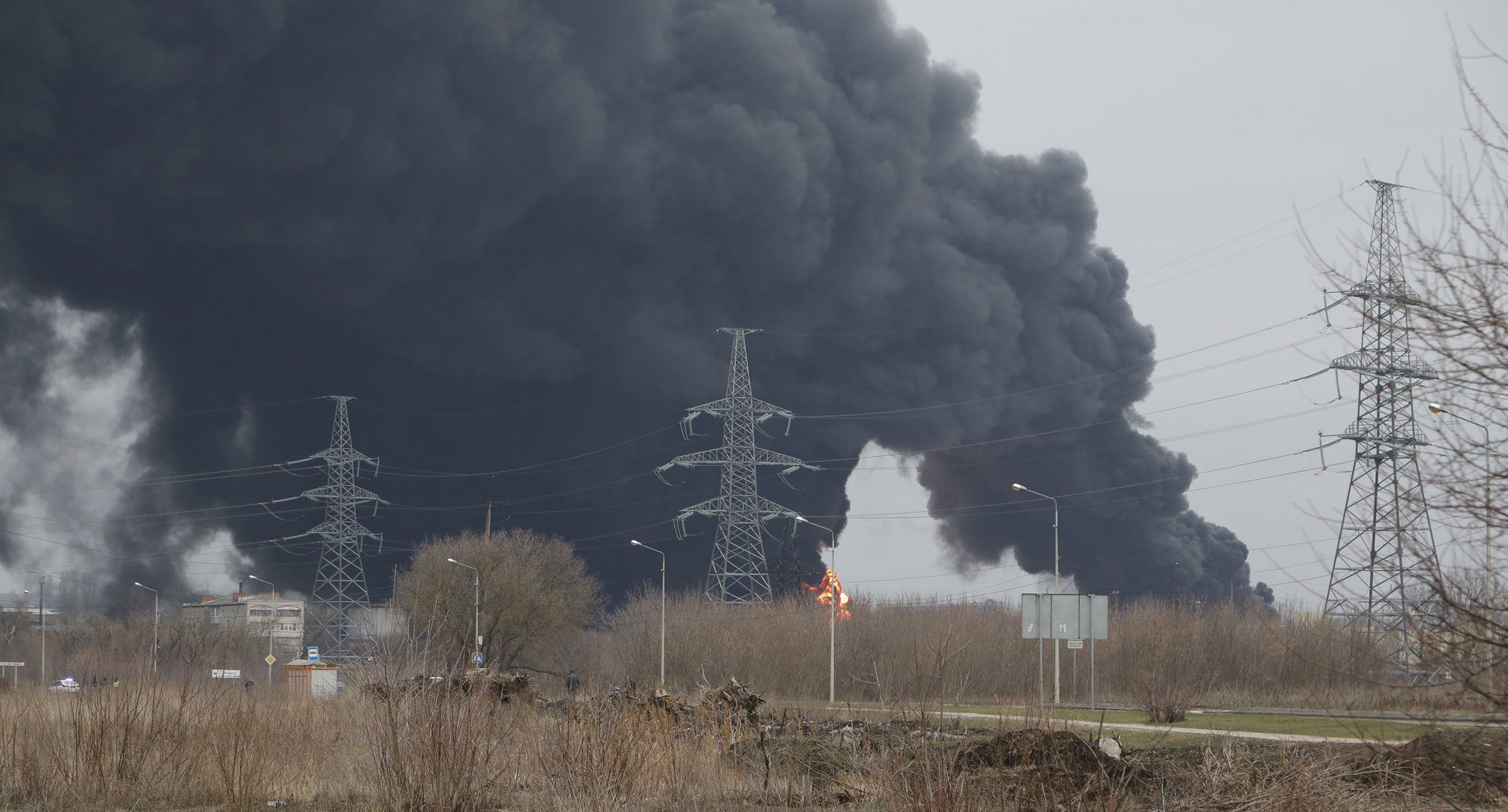 Russia’s full-scale invasion of Ukraine has been going on for three months. However, the fact that the current hostilities are taking place exclusively on the territory of Ukraine does not prevent the destruction of Russia’s critical and military infrastructure. Recently, there has been more and more news about the arson attacks on Russian military enlistment offices, explosions at fuel and lubricant storage facilities, fires at military and important civilian infrastructure facilities. Zaborona, together with military analyst Yigal Levin, is investigating who may be behind it and whether it will benefit Ukraine.

What has already burned in Russia?

Since the beginning of the full-scale war, at least three cases of large fires at Russia’s military depots have been recorded. On March 4, the press service of Command of Land Forces of Armed Forces of Ukraine published a video of a fire in the village of Tiotkino, Kursk region, Russia, where ammunition exploded. “According to official information, the explosion was the result of a violation of safety regulations during the repair of military equipment,” the statement said. The press service of the Land Forces commented on this message quite succinctly: “Yes, who can argue. We are not there.” The village of Tiotkino is located directly on the border with Ukraine near the Sumy region.

On April 27, a large fire broke out at a military ammunition depot in the Belgorod region near the village of Staraya Nelidovka. The governor of the region Viacheslav Gladkov said: “At about 3:35 I woke up from a loud sound, similar to an explosion. While writing this message, there were three more explosions. He has just contacted Denis Zolotukhin, the head of the Golovinsky rural settlement. According to preliminary data, an ammunition depot is burning near the village of Staraya Nelidovka.” The fact of the fire is confirmed by photos and videos in social networks. The Ukrainian side, as before, did not confirm or deny its involvement in the incident:

“If you [Russians] decide to massively attack another country, massively kill everyone there, ran over  civilians by tanks, and use warehouses in your region to carry out assassinations, sooner or later debts will have to be repaid,” said then adviser to the head of the President’s Office Mykhailo Podolyak. “With such intensity and volume of the Russian military invasion of Ukraine it will not be possible for them to stay intact. That is why the disarmament of the Belgorod-Voronezh warehouses of murderers is a completely natural process. Karma is a cruel thing.”

On May 1, a series of explosions at Russian military depots continued in the village of Tomarovka, Belgorod region. Footage of the explosions and a huge cloud of smoke was spreading on social networks. After that, the Russian authorities only confirmed the fact of a fire at a military facility and later reported one victim.

At least two fires at Russian oil depots are known for certain. The first took place on April 1 in the city of Belgorod near the border with Ukraine – a video of a large-scale fire went viral. In some shots you can see the moment that seemed to precede the fire: two helicopters strike with three missiles at the oil depot and immediately leave the perimeter. Which helicopters were noticed has not yet been identified due to the very low quality of the video and the remoteness of the aircraft. However, Russian authorities almost immediately blamed Ukraine for the fire.

“The fire at the oil depot was caused by an air strike from two helicopters of the Ukraine’s Armed Forces, which entered the territory of Russia at low altitude,” said the governor of Belgorod region Viacheslav Gladkov. Oleksiy Arestovych, adviser to the head of the President’s Office of Ukraine, commented on the situation from the side of the Ukrainian authorities: “What I want to tell you about Belgorod. The military-political leadership of Ukraine uses all means, methods and techniques to secure Ukraine, our territorial integrity, inviolability, peace and tranquility. We are conducting defensive operations on our territory. The Russian leadership is responsible for what is happening in the territory of the Russian Federation, and they need to analyze what is happening in Belgorod. Maybe someone smoked in the wrong place, maybe the Russian military is sabotaging the execution of orders, they don’t want to enter Ukrainian territory.”

An even bigger fire broke out on April 25 in the city of Bryansk. It was reported by Interfax with reference to the Ministry of Emergencies of Russia. Later, Oleksiy Khabatyuk, Deputy Head of the Energy Efficiency Department of Naftogaz, informed on social networks that the fire took place at the Bryansk filling station in a 10,000 cubic meters tank.

On the morning of April 21, it became known about a fire in the building of the second central research institute of the Russian Ministry of Defense in Tver. The institute developed theories of air defense weapons, produced navigation instruments, control systems, guidance and orientation for ground, air and space-based vehicles. It is known that this research institute participated in the development of Iskander missile systems, which the Russian Federation uses in Ukraine, as well as anti-aircraft systems and anti-surveillance systems for Tu-160 strategic bombers. The fire was extinguished for almost all day – according to Russian media, about 30 people were injured, another died.

In Tver, the Defense Research Institute of Air and Space Defense is on fire.

Presumably, the fire started on the second floor of a building with wooden floors, lined with plastic inside.

10 fire brigades and 7 ambulances are on the scene.

On the same day, another fire broke out on the territory of a chemical plant in the town of Kineshma, Ivanovo region, bordering Moscow region. The fire damaged the workshop building with an area of ​​1.5 thousand square meters. It also became known about two victims.

On May 1, a gunpowder factory was burning in Russia. It produced charges for air defense, as well as for Grad and Smerch MLRS. As reported by the State Labor Inspectorate of the Perm region, the fire occurred at the plastic production site. As a result, three workers were injured, two of them died. And three days later, on May 4, it became known about a fire at another chemical plant in the Russian city of Dzerzhinsk, in the Nizhny Novgorod region. One of the chemical tanks caught fire there.

In addition, fires in military enlistment offices are becoming more common in Russia. There are videos in which unknown people throw Molotov cocktails into the premises of the offices. You can find videos of arson in at least three buildings of military commissariats in Lukhovitsy, Cherepovets and Nizhnevartovsk. However, Oleksiy Arestovych noted that, according to his information, “dozens” of such arsons have already occurred.

What does all this mean for Ukraine?

Military analyst Yigal Levin is convinced that all the fires and arsons that are currently taking place in Russia are directly related to the Russian war against Ukraine. However, in his opinion, it doesn’t matter whether Ukraine is behind these incidents or not. The main thing is the consequences: complicating the work of military enlistment offices, logistical disruptions and creating a certain information background.

The analyst calls the so-called domestic anti-war movement one of the possible perpetrators and initiators of such operations in the occupiers’ territory: “There is information that there is a large anti-war movement in Russia that is not about slogans or rallies (because slogans and rallies are not for Russia), but namely about sabotage. We see that fires are taking place not only in the areas bordering Ukraine, for which we can be blamed, but also in the depths of Russia, including in Siberia and the Far East. I doubt that Ukraine has such long arms to bomb the Far East. That is, there is a sabotage and protest movement, and it can already be called guerrillas in Russia.”

Yigal believes that these explosions and fires can have completely different performers and motivations. For example, arson of military enlistment offices or damage to railway connections may well be the work of guerrillas inside the country. However, explosions in the border area of ​​the Belgorod region indicate that Russia itself can bomb its own cities. For example, the CIT organization, engaged in military research, proved that several missiles that hit the Belgorod region were fired from the Russian Federation territory.

“The important thing here is this: whether it’s a mistake and the shells just didn’t reach Ukraine or the strike was deliberately, purposefully aimed there – only the Russian leadership knows. It can’t be ruled out that they themselves strike blows to justify mobilization in these regions,” Levin said. “That is, they can tell people – you see, you have “booms” here [representatives of the Russian authorities and the federal media do not use the word “explosion”] and fires, so everyone is to arms to defend their homeland. If I were a local government, I would be interested in my region burning so I didn’t have to explain to people why they were all being sent to war.”

One way or another, according to the analyst, the destruction of Russia’s critical and military infrastructure is an unconditional plus for Ukraine. According to Mr. Levin, the goals on the territory of Russia are legitimate for Ukraine and we have every right to destroy them. Our allies are of the same opinion. For example, British Defense Secretary Ben Wallace believes that military facilities in the Russian Federation may be legitimate targets for the Ukrainian army. Moreover, under international law, a country that provides its territory to a second country for aggression against a third country is considered an aggressor. This means that the destruction of Russian military targets on the territory of Belarus by Ukraine will also be legitimate.

“Based on this, whether Ukraine could strike such blows – yes, it could, of course. Ukraine has aviation, helicopters and artillery. But since we don’t have an official statement, we can’t speak of it as a fact. Obviously, when there is a full-scale war, someone will suffer. “The Belgorod region is a border region, so it is quite possible to expect some “booms” and that someone will suffer there,” Yigal Levin summed up.