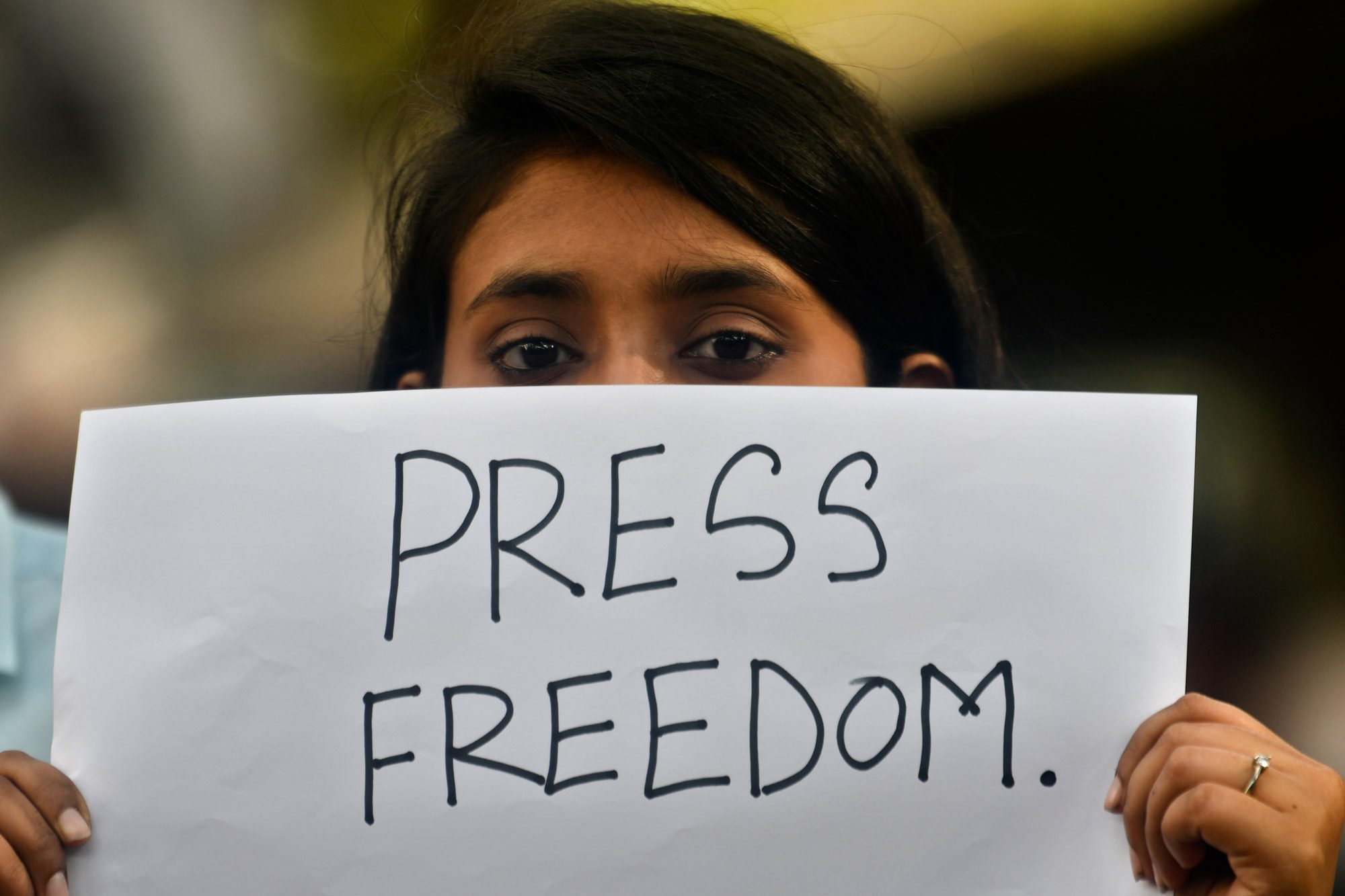 Sandbags are seen protecting a lookout position at the cultural center that was used as a base by Russian forces during their occupation of the town on November 23, 2022 in Snihurivka, Ukraine. Photo by Chris McGrath/Getty Images

Matilde Kimer, a correspondent for the public broadcaster Danish Radio, covering events in Ukraine and Russia, said in an interview with DR that in August she was deprived of military accreditation in Ukraine. For several months, the journalist and her employer tried to find out for what violation she was deprived of the opportunity to work in Ukraine — eventually it became known that the SBU was in charge of the case. In December, it became known that it is possible to renew Kimer’s accreditation in the event of a “change in the position of the SBU”; however, what this position is and how it changes, the service does not specify.

Zaborona’s editor-in-chief Katerina Sergatskova looked into what happened and what old posts on social networks have to do with it.

Matilde Kimer has been working as a journalist in Russia, Ukraine and Central Asia since 2006, and as a correspondent for Danish Radio since 2009. For several years she lived in Moscow, working in the bureau of the broadcasting company. In June, DR decided to open a main bureau in Kyiv, as did such international publications as the Washington Post and The New York Times.

Since the beginning of the war in 2014, Matilde Kimer has been working as a reporter in Ukraine and reporting on the war from the frontline. In November 2022, she received the Ebbe Munck Award for journalism from the Queen of Denmark, which is considered the highest award in the country.

On December 19, the journalist spoke about the situation regarding Kimer’s work in Ukraine. According to her, on 22 August, she received a letter from the Public Relations Department of the Armed Forces of Ukraine stating that her accreditation had been revoked without explanation.

Matilde believed it might be related to the situation in July during a business trip to Mykolaiv region. Her interpreter Ivan Kravtsov arranged an interview with a farmer whose field burned down due to shelling. However, at the checkpoint they were told that they would not be able to pass, as the village is close to the front line, and they must be accompanied by a press officer. It turned out that the interpreter had not warned the Danish journalist about this. After that, according to Matilde, they went to Odesa, where she had a conversation with the Joint Command “South” spokesperson Natalia Gumenyuk. The Armed Forces representative said there was no problem and the journalist could continue working. In a conversation with Zaborona, Gumenyuk confirmed that she had spoken with Kimer, but could not say whether this situation was the reason for withdrawing her accreditation.

According to Ivan Kravtsov, who accompanied the journalist, after the incident at the checkpoint, the press service of the Mykolaiv region said that Kilmer had problems because she had worked in Moscow for many years and published “controversial” posts on social media — photos from Russia.

“I think there was a problem with communication, and the SBU overreacted. After all, the fact that [Matilde] worked in Moscow, because she is a foreign correspondent, does not make her a Russian spy,” Kravtsov said. “Previously, she was allowed to interview Petro Poroshenko [during his presidency], Foreign Minister Dmytro Kuleba, and was in [President] Volodymyr Zelenskyy’s pool of journalists — it is unlikely that the special services did not check her background before that. They had no complaints, and then suddenly, at the level of Mykolaiv region, they draw conclusions about her views based on an Instagram photo with a Russian doll with an ironic caption in Danish language, which they do not understand.”

Meeting Kimer and the SBU

After the business trip to Mykolaiv, Matilde Kimer went to Moscow. From there, on August 1, immediately upon arrival, she was deported “for security and defense reasons”. The journalist was also banned from entering Russia for 10 years. Shortly after that, she was banned from working as a journalist in Ukraine. According to her, she appealed to the press secretary of the SBU, Artem Dekhtyarenko, and to the Ministry of Defense, but did not receive any explanations. Kimer then appealed to the Ministry of Foreign Affairs of Denmark and the Danish Embassy in Kyiv. The embassy staff contacted the SBU, and they invited the journalist to a meeting in Kyiv.

The meeting at the SBU took place on December, 8. In addition to Matilde, there were two other employees of the Danish Embassy. According to Matilde, an SBU officer named Oleg asked her why she travelled to Transnistria and Russia.

“They also asked me why I travelled to Crimea,” Kimer said in a conversation with Zaborona, “I worked in Crimea during the annexation and went there on the anniversary of the annexation — through Russia, but this was before Ukraine passed a law banning entry to Crimea through Russia. I was also asked why I went to the “LPR” (so-called “Luhansk People’s Republic”) and “DPR” (so-called “Donetsk People’s Republic”). I answered that I worked as a journalist and covered what was happening there. I understood that, in their opinion, this meant that I was collaborating [with the occupiers]”.

During her meeting with the SBU, Kimer says she was told that they believed her deportation from Russia was a “cover” for her activities, implying that she was allegedly promoting “Russian narratives.” At the same time, she says, she could not present constructive arguments that she was working in Russia’s favor.

“One of the most important and enduring principles of DR is our editorial and independent freedom to do honest and trustworthy journalism for Danes,” says French, “So it is very problematic when someone — no matter who it is — tries to limit that freedom. No one has done more honest and sober coverage of the war in Ukraine than she has.”

“At the end of the meeting, I asked how I could regain his trust, and the SBU officer said that he needed serious arguments to reconsider my case,” says Kimer, “He suggested that I do ‘good stories about Ukraine’ and use some SBU documents that could help me do such stories.”

Zaborona sent an inquiry to SBU spokesman Artem Dekhtyarenko, but he had not responded by publication.

There is a scandal around the situation in Denmark. Danish Foreign Minister Lars Løkke Rasmussen expressed concern about the situation and said that his task in his new position (he was appointed only a week ago) is “to emphasize to the Ukrainian authorities that we attach great importance to freedom of the press.” And the head of the Danish Union of Journalists, Tine Johansen, calls the situation “a blow to press freedom.”

“I worked with Mathilde Kimer at the Danish Broadcasting Company, and I can say that she is one of those who always covered the war in Ukraine with great enthusiasm, — says Charlotte Harder, the spokeswoman of the Danish Union of Journalists, in a conversation with Zaborona, — At the same time, she has never been a biased journalist. When the press [in the West] began to forget about the war in Ukraine, she insisted that it was crucial to cover these events. Therefore, I believe that depriving her of her accreditation is a very paradoxical and very bad and sad decision.”

The National Union of Journalists of Ukraine received an appeal from the president of the Danish Union of Journalists, Tina Johansen, who expressed her concern about this decision of the SBU, which received a significant response in Denmark. NSJU sent a request to the Ukrainian service to find out exactly why the journalist was depriving her of her right to perform editorial tasks.

The response of the SBU stated that during the monitoring of the information space on the personal page of Matilda Kimer (the page is open and verified) on Facebook, a number of her materials were found. They “allow us to assume that the journalist had close cooperation with the Ministry of Defense of the Russian Federation.” “In particular, Matilda Kimer covered the large-scale exercises of the aggressor country “West-2017”, “Vostok-2018″, was in the pool of media representatives who visited, at the invitation of the Ministry of Defense of the Russian Federation, a Russian base and a warship in Syria. Also in 2017, Matilda Kimer was in occupied Donetsk, covering the parade of the Russian occupying forces. In 2016 she visited the occupied Crimean peninsula,” the letter states.

Weapons for Ukraine are at stake

In a conversation with Zaborona, Kimer says he will seek justice and the opportunity to restore accreditation in Ukraine, as she “believes in Ukrainian democracy.”

Meanwhile, on December 19, President Volodymyr Zelenskyy appealed to the Danish government to provide new weapons systems to Ukraine. Defense Minister Jakob Ellemann-Jensen (he represents the leftist party) said he would consider the request for weapons. But that was before it became known that the accreditation of the Danish Radio journalist had been revoked.

“It’s a balance between what we have, what we need, and the desire to support those who are fighting for freedom on behalf of all of us,” the Danish Defense Minister then responded to Zelenskyy’s request. But the Danish Foreign Minister said that even though the parliament “is not going to mix these two situations in its work with Ukraine,” he is still going to talk to his colleague, Ukrainian Foreign Minister Dmytro Kuleba, “in the near future.”