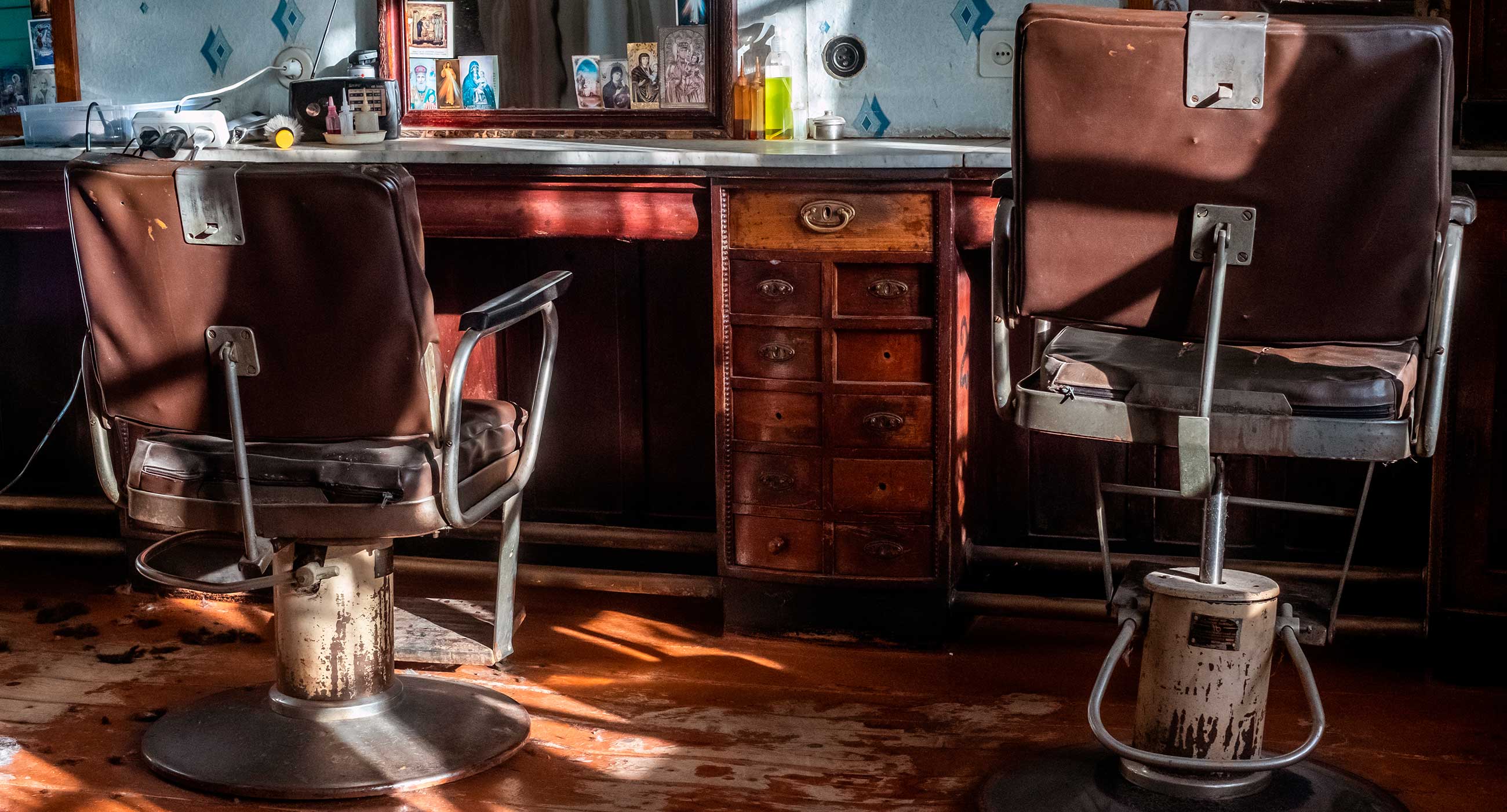 The interior of a hairdressing salon in Khodoriv. Photo: Pavlo Bishko / Zaborona

Zaborona’s photo editor Pavlo Bishko continues his archival searches in Galicia (you can read about them here and here). This time, he came across places that preserve the memory of two bygone eras — hairdressing salons in Lviv and Khodoriv, reminiscent of the Soviet and Austro-Hungarian empires — and tells us what these time machines look like in 2022.

“You are served by Mr. Volodymyr Zayats”

Volodymyr Zayats has been working in the hairdressing salon in Khodoriv since 1984. He learned the skills of a hairdresser in the army. He started with the haircuts of ordinary soldiers, then he was entrusted with the service of officers, and then military commanders. After completing military service in Moscow, the man returned to his native Khodoriv, Lviv region. According to Soviet law, he had 3 months to find a job. He came to a barbershop on Shevchenko Street, where he stayed to work for 38 years. In the first days of work, Volodymyr was so scared that he hid behind the curtain of the back room, afraid to go out to the clients.

There are only three chairs in the barbershop. Yaroslava was working at the nearby chair, teaching Volodymyr to cut hair — in the army he cut the military’s hair “under zero” or “under three mm”, and he had to learn more complicated techniques in Khodoriv. Yaroslava died at the age of 68, and now the chair is empty: no one works near it, and no customers sit there. The third chair is also not occupied. On the wall near each of them, there are cards with the name and surname of the hairdresser glued with tape. Near Volodymyr’s chair, there is a card with the inscription “You are served by Mr. Volodymyr”.

For 38 years of work from Monday to Saturday, the hairdresser from Khodoriv has gained a lot of regular customers. Today, a client with the surname Vedmid (‘a bear’ in English) came to Mr. Zayats (‘a hare’ in English) on a bike “Ukraine”. He has been getting his hair cut here for about 20 years. Mr. Volodymyr says in the manner of a Soviet joke that “now the hare will cut the bear’s hair”. Other clients waiting for their turn in the corner, upholstered with wooden panels of the early XX century, smiling. One customer says that everyone who goes to Mr. Volodymyr says among themselves that they are going “to the hare.”

In order not to get bored while working, Volodymyr tells his regular customers strange stories. For example, about his father, who was clairvoyant. He believed that digital photography, unlike film photography, does not preserve human energy. A film photo shows where healthy and sick places in the body are. Once a young girl disappeared in Khodoriv. Mr. Volodymyr’s father was brought her photo. Holding the picture in his hand, the father said that the girl was alive (later it turned out that she ran away from home).

Zaborona is not the first to take an interest in the old barbershop. Mr. Zayats says that this summer, Polish director Krzysztof Zanussi visited the barbershop with his film crew. He was documenting a trip to Galicia and became interested in the vintage interior of the hair salon. Previously, there was a pharmacy here, and after the end of World War II, a hairdressing salon was opened in the building. Since then, the facade and interior of the hair salon have not changed, except for a modern electric meter and waiting chairs. The 40-year-old cactus is also unchanged. Clients ask Zayats not to change anything in the interior of the institution and not to arrange renovation.

Perhaps after the hair salon, there will be a barbershop

On Lviv’s Zelena Street there is also a hairdresser’s called “Perukarnya” (“Hairdresser’s”). Maria has been working here for 20 years (at the request of the heroine, her last name is not mentioned). Maria says that she mostly works because her pension is not enough to live on. The Lviv hairdresser’s is a bit smaller than the one in Khodoriv — there are only two chairs. Maria’s sister has been working near the next chair for 40 years. However, they hardly ever meet at work: when Maria’s shift ends, her sister starts working, and vice versa.

The hair salon is a mix of low-quality Soviet furniture, which could be seen in Poland, Ukraine, and the GDR, and kitschy plastic interior decoration of the early 2000s. The old TV set of Lviv brand “Electron” has been standing in the corner for decades. It plays a decorative role — the TV antenna has long been disconnected; it seems that in the 1990s it played songs from the TV hit parade “Territory A” — the most famous hotbed of Ukrainian music on television.

The hair salon is located just a 10-minute walk from the city center in an old building from 1910, built in the late Austro-Hungarian Secession style. It was opened in 1941, but is due to close in about a month: the attractive business premises have a new owner. Mrs. Maria says that she will not be able to work in a barbershop or a modern hairdresser’s because of her age. To do haircuts at home, she needs the right conditions and a separate room, which she does not have.

Today, a physicist Mr. Bohdan, who has been getting his hair cut here for over 10 years, came to Maria. The man is 81 years old — he works in the laboratory of the Ivan Franko National University of Lviv. Another regular customer, when he learned about the closure of the barbershop, took a picture of the interior. Nostalgia either for youth or for childhood, which has the last chance for memory and now will remain only in the photo.