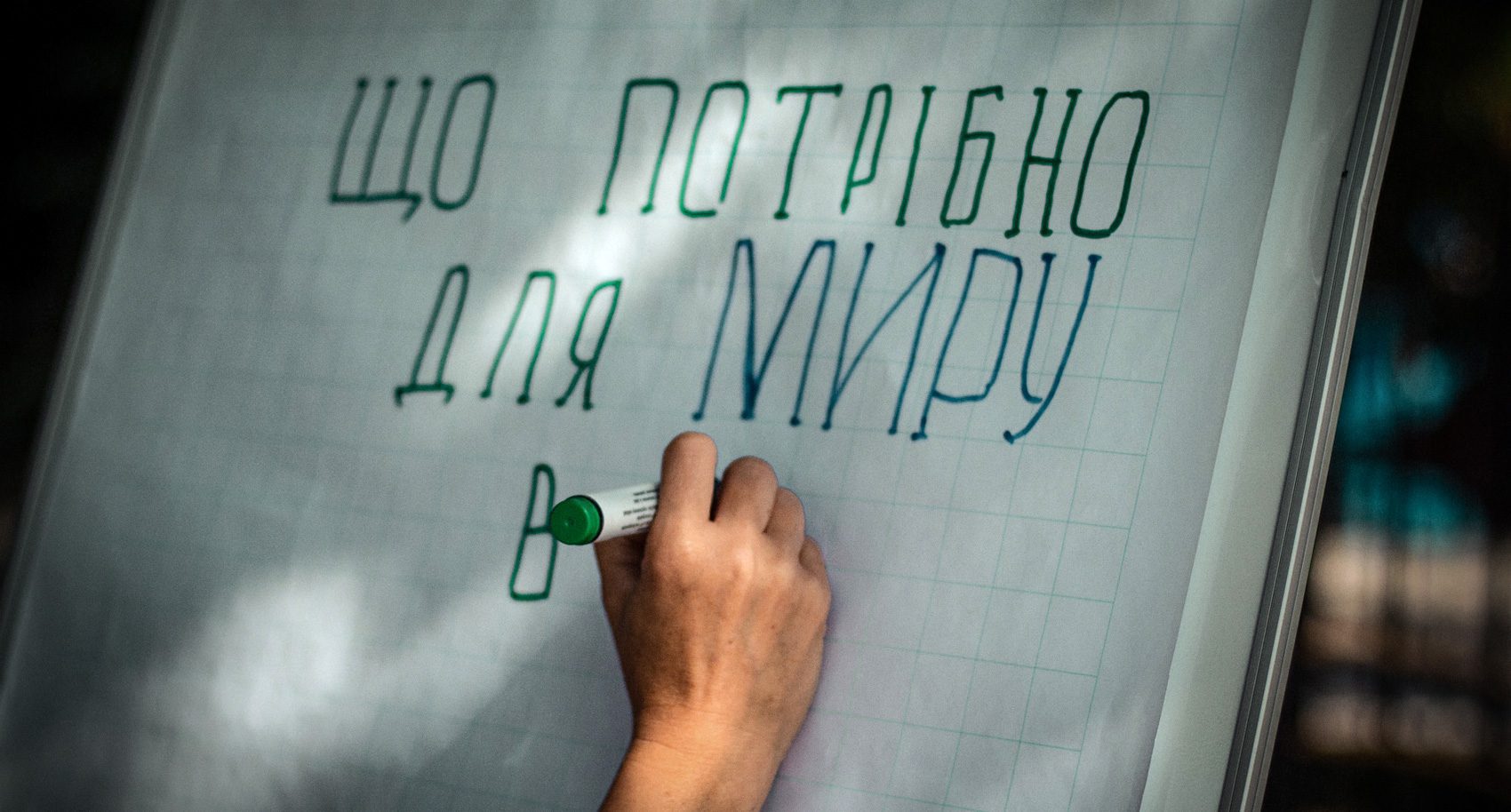 Day of peace in the city of Melitopol. Photo courtesy of STAN

Every day, we fight for peace. We protect borders, educate citizens, establish a dialogue between free and occupied territories. On the eve of the annual Peace Day, ‌STAN youth organization created a space for discussion between different people in 15 cities of Ukraine. We wrote more about these events here and here. Zaborona also spoke with experts and learned what prevents Ukraine from building relations within the country and what are the models for solving the problem.

Events dedicated to the Day of Peace in Ukraine are organized by the ‌STAN Youth Organization with the support of the United States Agency for International Development (USAID).

“We have relatives in Russia, but there are also those who stayed in Luhansk. At first, we quarrelled a lot between the families. And now we decided not to discuss this topic at all. Dialogue and acceptance helped us. Traditions united us — folk costumes, holidays”.

How to find a common language? Art can help. Here is the opinion of Yana Salakhova, co-founder of the Theater for Changes:

“Art has a good potential for uniting people if it appeals to their life experiences. Accepting different experiences contributes to the formation of a culture of memory — the way we remember painful events, the way we preserve that memory. Art helps to dream as well. In order to rebuild peace, people should dream about it and imagine it”.

“I was very worried during Maidan. But all my friends and relatives said nothing and refused to talk to me about those events. It was forbidden to raise the issues of war and the unity of Ukraine. They still refuse to speak Ukrainian”.

How to talk about painful events? We need to look for common values. Here is the opinion of Valentina Potapova, an expert in reintegration of Ukrainian citizens who are forced to stay in the occupied territories:

“Ukraine will reach peace when its citizens start feeling responsible for their own country. It is important to understand that this country is ours. This needs to be taught to the younger generation — it is necessary to protect not only borders, but the information space as well. Unfortunately, in the occupied territories, young people believe that the society of free Ukraine is that of nationalists who seized power. Therefore, it is necessary to rescue those who still mention the Russian Federation. In the information field of free Ukraine, there is an opinion that traitors preparing for war live in the occupied territories, and we have nothing in common. This is due to propaganda both from Russian and Ukrainian sides.

In order to make the transition to peace, we need to start a dialogue. At the state level, there should be joint projects for young people from different occupied territories — festivals, games. It is necessary to create virtual platforms for communication — and these are not Zoom meetings, but creative activities. This is how Ukrainians will learn what kind of people they are and what unites them. I work in Crimea and talk to a lot of young people there. What I see is that they are no different from those who live in the free territory. They strive for the same values: freedom, respect for human rights. And establishing contact does not mean that we will stop defending our borders. We will just find points that unite young people across the country. Because they will determine our future. The state should work strategically, rather than tactically — with children who will become the new future of Ukraine in 30 years”.

“The state must stop allocating money for the war. It is better to spend this money on hospitals, schools, kindergartens, on creating new jobs for people. Jobs must be created in the occupied territories. People need to make a living, they need to eat and dress, heat their homes. If all of this is unavailable, they go to war, get engaged in looting, plunder. They are involved in drug trafficking or import weapons into the occupied territories”.

How to return the occupied territories? We need to be economically attractive and prepare for defense. Here is what Maksym Osadchuk, Donbass war veteran, a historian and public figure, says:

“Peace with Russia is possible only if there is a sufficiently strong and organized national defense — both for us and for other countries threatened by armed aggression.

“I have a negative attitude towards people who are forced to stay in the occupied territories, so I will remain silent. They made the wrong choice themselves. I know those who stayed there. They were all brainwashed by propaganda. And I have no idea how to return them to the free Ukraine. I just don’t believe in dialogue with them. We can be open to them, but won’t we get a knife in the back?”

How to respect another person’s choice? You can look at experience of other countries. Here is what Myroslav Greenberg, co-founder and chairman of the Kyiv Educational Center “Space of Tolerance”, says:

“The meaning of the word ‘tolerance’ has been lost. Today it is used both where it is necessary and unnecessary. Religious wars continued for many years to ensure that the choice of one side was accepted by the other. In 1555, the first treaty between Lutherans and Catholics was introduced in Germany, initiating the first religious peace. It was the Augsburg Settlement. This document showed that there can be peace within one state, even though people have different religions. Tolerance to the other was the result of this arrangement, and such cases have often been repeated throughout history. In order for peace to prevail within the country, the rulers of the country issued special laws — not because they respected the religion of a particular group. But in order to establish peace, they needed to coexist with these groups and accept them.

If we talk about the modern world, then tolerance is a condition of freedom for people. Even if a person does things that are bad for them, this is not a reason to intervene. We may disagree with them, but we must be patient. People are free only because their choice and right to choose are respected. Tolerance means that you understand other people’s beliefs. Whatever they are, they deserve attention. We must treat people who have these thoughts or beliefs with respect and attention”.

Every year, STAN youth organization sets up activities to build peace in Ukraine. In 2021, thousands of people from all over the country took part in them. Join the next activities in 2022.