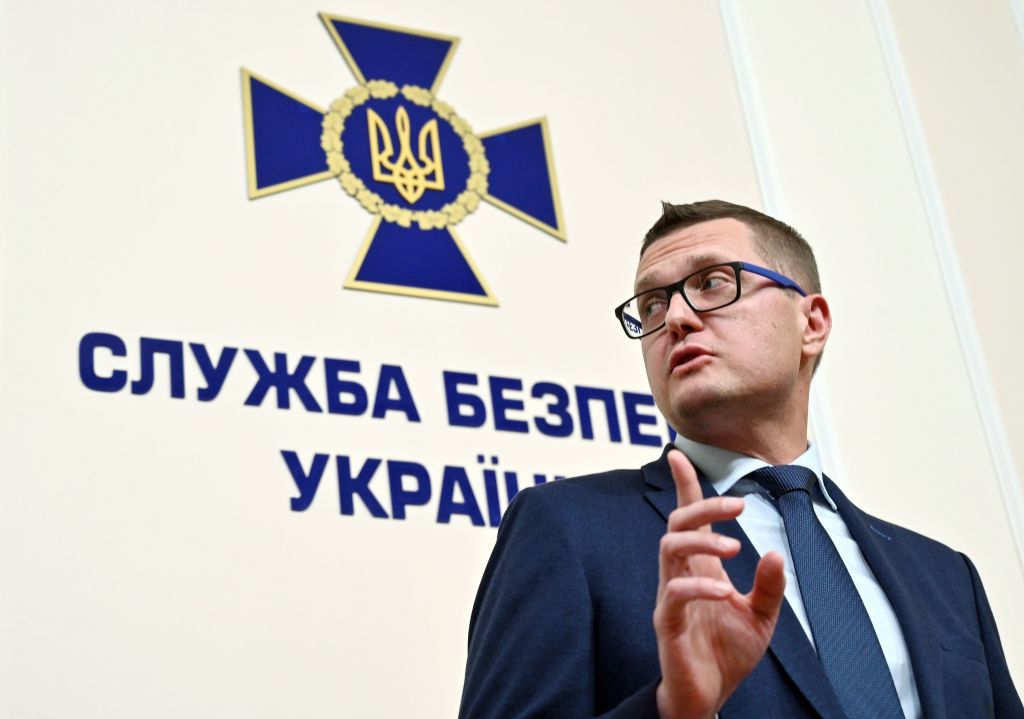 Acting Deputy Chairman of the Security Service of Ukraine Ivan Bakanov is taking part in a press conference in Kyiv on July 16, 2019. Photo: SERGEI SUPINSKY / AFP via Getty Images

The Security Service of Ukraine released a video with the participation of the People’s Deputy of Ukraine from OPZH Viktor Medvedchuk. Putin’s godfather was under house arrest for several months, but in the first days of Russia’s full-scale invasion of Ukraine, he managed to escape. One and a half months later, on April 12, Medvedchuk was detained again in Kyiv, and a month and a half later he testified in one of the cases against Petro Poroshenko.

Zaborona tells the details of the SSU video, the reaction to the accusations of the EU and the fifth president’s lawyer, as well as the Kremlin’s statements about exchanging Medvedchuk for Azovstal soldiers who surrendered last week by order of the top command.

Video of the Security Service of Ukraine With Accusations of Poroshenko

On May 23, 2022, the SSU published a 13-minute video in which Viktor Medvedchuk spoke about the alleged scheme of removing from state ownership part of the main oil pipeline «Samara — Western direction» for further pumping of diesel fuel through it.

«Describing the essence of the scheme, Medvedchuk detailed the role of former President Petro Poroshenko in it. Namely, he not only asked Medvedchuk to contact the Russian leadership, but also ensured that the necessary decisions were made in all Ukrainian instances. Medvedchuk said that in order for the pipeline to become private property, and in fact Poroshenko’s property, several actions had to be taken — courts, the prosecutor’s office, the Antimonopoly Committee, the State Property Fund — all of which made decisions necessary for President Poroshenko’s personal interests», — is spoken in the message of SSU.

In the video, Medvedchuk claims that he dealt with the pipeline at the request of the fifth president. In the end, the pipeline earned twice as much for its owners in a year as it did, up to $42 million. The scheme, the suspect says, has stopped working since 2019, as soon as Poroshenko resigned as president.

«Medvedchuk also told the details of the establishment in 2014-2015 of a mechanism for purchasing coal for the energy needs of Ukraine in the temporarily occupied territories of the so-called L / DNR, practically — from the leaders of the militants. In fact, the entire top of the state apparatus was involved in this, starting with the president and ending with ministers, law enforcement officers and those who directly implemented this scheme», — the SSU said.

The leader of the OPZH named specific names of high-ranking officials involved in harming the interests of our state — former government officials, former leadership of the National Bank, MPs and law enforcement officials.

«Information from Medvedchuk gives Ukrainian society an opportunity to see what the state policy was like before. This is really a question not only of legal responsibility, but also of moral responsibility. Because we saw an example of incredible political cynicism — when under patriotic slogans business issues were resolved and even terrorists were financed. For a quick penny, Russia’s influence in Ukraine was strengthened», – SSU chief Ivan Bakanov added a few hours later.

Video With Medvedchuk: What They Say at Poroshenko’s

«In our opinion, in general, what the SSU is doing is exclusively PR. First, this is not their business, this should be done by the State Bureau of Investigation. And what the SSU says about it confirms that there is nothing to do with the truth and the law», — the lawyer said.

According to Golovan, the decision to publish Medvedchuk’s testimony is connected with the court hearing in the case of the fifth president: a court hearing on the arrest of Petro Poroshenko’s property is scheduled for May 23. This is the usual pressure on the court, the lawyer concluded.

European Solidarity also issued a statement in defense of its leader.

«Medvedchuk, who saves his skin from responsibility for his anti-Ukrainian activities, is ready to say anything about anyone. These are not the first sensational demonstrations against Poroshenko, they have already been given by Portnov, Derkach, Onishchenko, Zhvania, Kuzmin and other Russian agents. There is no doubt that the words about Poroshenko to Medvedchuk were written by customers, so he read them from the prompter. The payment for these testimonies was the transfer to better living conditions and promises of exchange. We are sorry that during the war the Security Service of Ukraine does not investigate cases of obvious collaboration with the enemy of some SSU generals and Verkhovna Rada deputies, but edits bright politically motivated videos with Medvedchuk’s pseudo-testimonies», — is said in the EU statement.

They also took the opportunity to remind themselves in the terrorist country, hinting that the appearance of Viktor Medvedchuk’s testimony a few days after the capture of Azovstal’s defenders was unrelated.

So, a few hours after the release of the SSU video with a statement by one of the leaders of the OPZH, Russian President’s spokesman Dmitry Peskov said that Medvedchuk has nothing to do with Russia, his exchange is unlikely.

«We have already said that Medvedchuk is a citizen of Ukraine, he has nothing to do with Russia and is not a soldier. And in the case of those who surrendered to Azovstal, it is the military and members of nationalist groups. Therefore, these are entirely different categories of people, and it is hardly possible to talk about any exchanges here», — the Kremlin spokesman said.

Meanwhile, the head of the DNR terrorist group, Denis Pushylin, says that Ukrainian defenders will be tried by a «military tribunal».

Earlier, Zaborona reported on the withdrawal of hundreds of Ukrainian defenders from the territory of Azovstal who on the orders of the country’s top leadership surrendered to the occupiers.