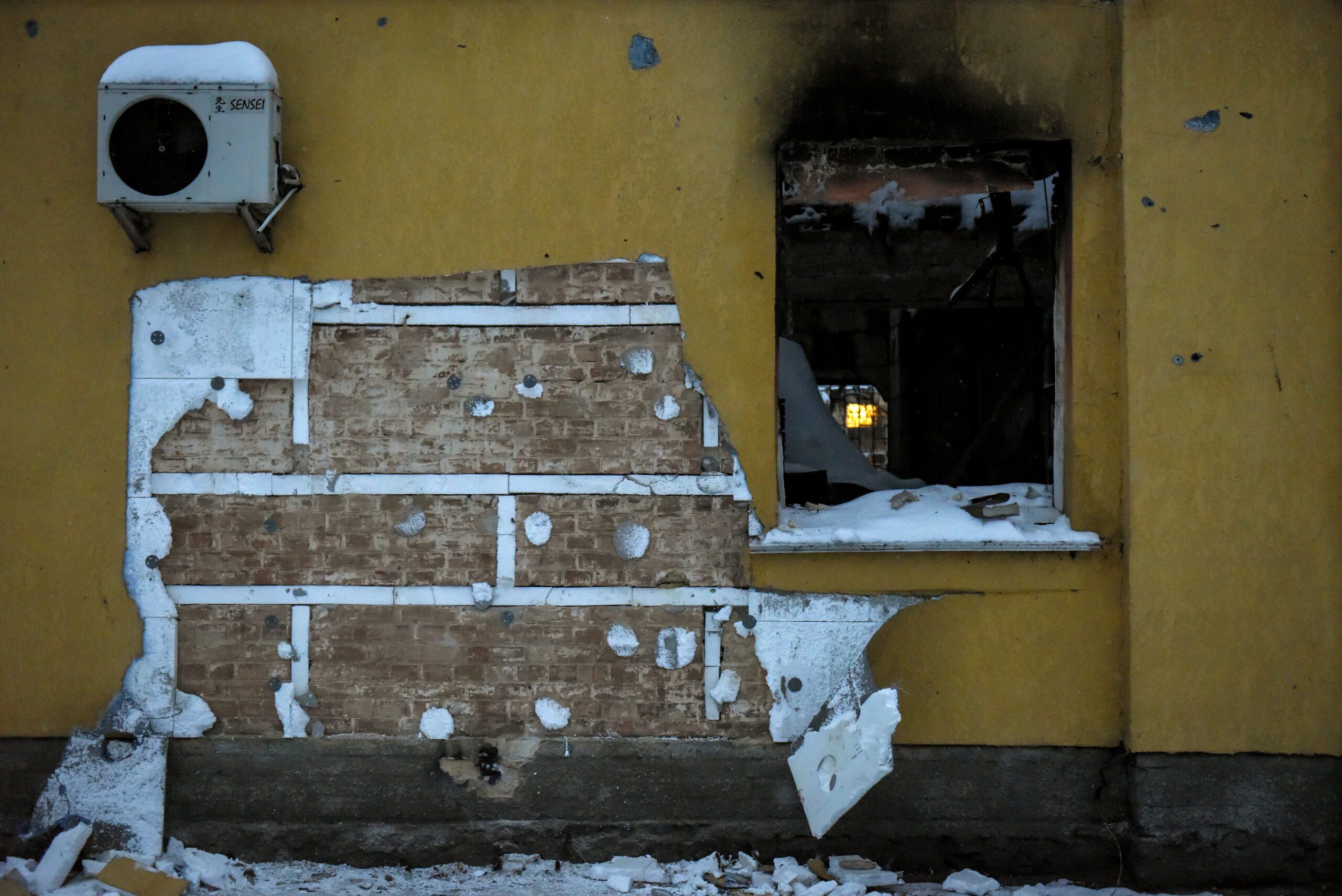 The wall of a residential building which displayed the work of street artist Banksy, in the town of Hostomel, near Kyiv, Ukraine, 03 December 2022. A group of eight people on 02 December tried to take a mural by street artist Banksy by cutting off a section of board and plaster from the wall bearing the artwork on a house in Hostomel that was damaged during Russia s invasion, the chief of the Kyiv regional National Police Andrii Nebytov said on telegram. Photo: EPA/OLEG PETRASYUK

Volunteer Serhiy Dovhy, who returned to Ukraine from Canada, planned to sell Banksy’s mural at one of the international auctions. The money earned would have been used to buy cars for Ukrainian soldiers. Together with his friends, Dovhy documented all his actions on tape, in order to later confirm his intentions, and at the same time apologize to the famous artist. Instead of an auction, he faces years in prison for almost looting, although the author of the work did not file a police report.

Zaborona tells the story of the controversial graffiti story in Hostomil.

On the morning of December 2, 2022, eight volunteers arrived at a dilapidated house in Hostomil, in the Kyiv region. On the wall of this building in early November, the famous British artist Banksy painted a picture – a woman in a bathrobe and a gas mask, Graty writes.

They cut a part of the insulation from the wall, on which there was a picture, and wrapped it in film. From time to time, residents of neighboring houses passed by the group of men, but no one interfered with them.

When the artist’s work was being loaded into the car, representatives of the National Guard approached the volunteers.

“They asked what we were doing here and whether we had a permit. Serhiy [one of the volunteers] approached them, showed his passport and started talking about the house: that it is being demolished, and we are saving the artist’s work,” recalls one of the event participants, sculptor Oleksandr Duvinskyi, who in 2022 masks cars for the front with paints.

The National Guardsmen called the patrol police. Officials of the Hostomil Military Settlement Council also arrived on the scene. After a long conversation, the law enforcement officers detained the volunteers and took them to the police station in Irpin together with the painting. After a formal interrogation, the artist’s work was confiscated, and the men were released. However, investigators opened proceedings under the article on property damage (Article 194 of the Criminal Code). The graffiti was valued at 9 million hryvnias, the suspects face up to 12 years.

Serhiy Dovhy: the suspicion announced to the volunteer

The organizer of the rescue operation was Serhiy Dovhy, a mathematician and volunteer from Kyiv. The man graduated from the Faculty of Mechanics and Mathematics in 2014 and moved to Canada in August of the same year. He defended his PhD thesis at the University of Manitoba and taught there until 2019. Then he went on a geological expedition, and in 2020 he moved to Vancouver. He is a member of Extinction Rebellion Ukraine. Serhiy returned to Ukraine in November 2021 and stayed, understanding what he was getting into. After the start of the full-scale invasion, he began to cooperate with one of the charitable organizations, the name of which is not disclosed, so that the graffiti story does not affect its reputation.

He initially appeared as a witness in the criminal proceedings, but on December 30, National Police investigators declared him a suspect.

The man is accused of “a completed attempt to secretly steal someone else’s property in particularly large quantities under martial law.” For this, he faces from seven to 12 years of imprisonment with confiscation.

On January 6, it became known that Judge Nataliya Karabaza of the Irpinsky City Court ordered Dovhiy not to leave Kyiv without the consent of the investigator, prosecutor, or court, to inform them of a change of job and place of residence, and to wear an electronic bracelet. The prosecutor of the Bucha district prosecutor’s office of the Kyiv region, Vadym Pavlyk, requested round-the-clock house arrest.

According to Dovhy, he did not organize the so-called theft for his own enrichment. Residents of the same building, which is located on Proskurivska Street in Hostomel, turned to his volunteer organization. He went to inspect it and came across a painting in which he recognized the master’s hand. Returning to Kyiv, the man learned that the destroyed house and several neighboring ones were going to be demolished already in December, so he decided to cut down and save the artist’s work.

Dovhy wanted to sell the painting at one of the international auctions (ideally Sotheby’s), and spend the proceeds to help the Ukrainian army, in particular, the purchase of at least 40 pickup trucks. He did not contact the local authorities, because he does not trust them.

“How does the Ukrainian government preserve a cultural thing? It is enough to mention “Kwity Ukrayiny” [Ukraine`s Flowers, the building in the center of Kyiv], “Dovzhenko Center”, lost mosaics and other cultural objects throughout Ukraine. I would write to Sotheby’s. Because they have been selling Banksy’s works for years. If they said: “Who are you?”, then I would write in some smaller auction,” Serhiy told the publication.

He also planned to ask Banksy. For this purpose, he invited cameraman friends with him to Hostomel, who were to film a documentary about how the picture was cut off and sold.

“I was thinking of apologizing to Banksy in the film. To say that if it weren’t for the war, I wouldn’t have done this. Because I am 32 years old, and for some reason I have not done this before. Then show what we did and say that our video is a tribute to what Banksy did in Ukraine,” says Dovhy.

Banksy is the pseudonym of a British artist whose identity has remained unknown for more than 30 years, the BBC writes.

In the early 1990s he painted trains and walls in Bristol. He was then noticed by the local press and in the 2000s his work began to appear throughout the UK and other parts of the world.

He creates graffiti and murals on roads, residential buildings, etc., his works always carry some kind of political message depicted through simple caricatures. They are sold at the most prestigious world auctions for millions of dollars. Banksy also publishes books with photos of his works and makes documentaries.

At the beginning of November 2022, the artist visited Ukraine. He painted seven graffiti: in Kyiv, Borodyanka, Irpin, Hostomel and Gorenka and in this way showed his solidarity with the Ukrainian people.

In December, Banksy also organized a charity fundraiser in support of Ukraine. He announced that he would sell 50 author’s stencils with a white rat, and he would give the proceeds to “friends from Ukraine.”