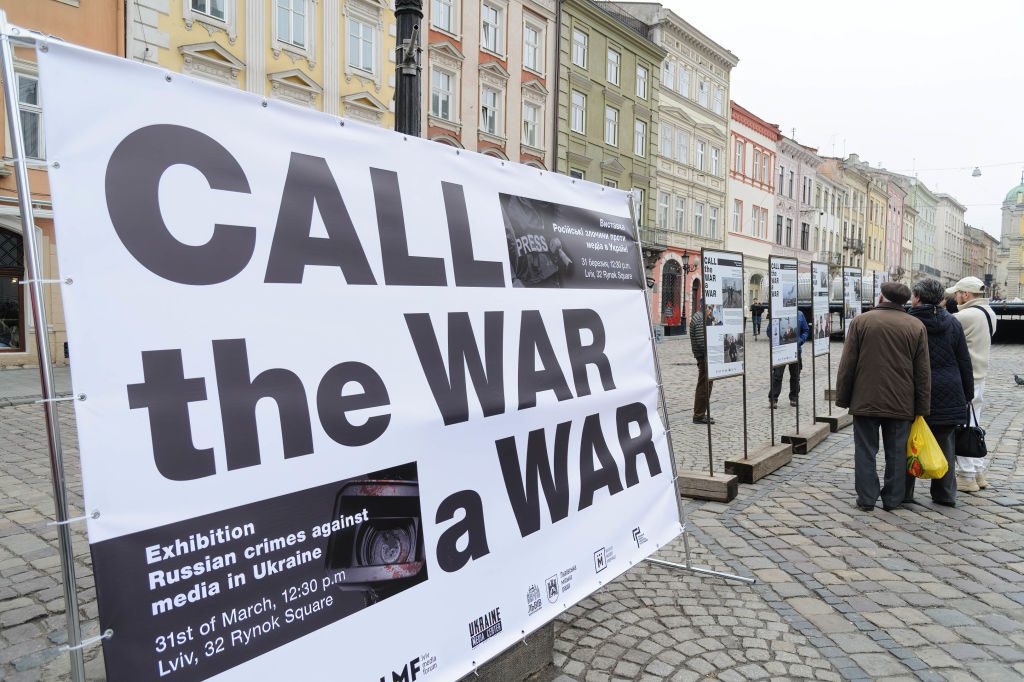 A huge banner is seen during the exhibition, 'Call the War Ð° War: Russian Crimes Against Media in Ukraine After February 24 2022'. March 31, 2022, Lviv, Ukraine. Photo by Mykola Tys/SOPA Images/LightRocket via Getty Images

Ukraine has introduced criminal penalties for propaganda of Russian Federation, the Putin bloody regime and the use of symbols shared by the aggressor state during the invasion of Ukraine. Violators will be imprisoned for up to five years.

Zaborona explains everything you need to know about the ban on Russian propaganda and symbols in Ukraine.

The bill about the ban on propaganda of the Putin’s regime: details

Verkhovna Rada of Ukraine passed the bill №7214 about the ban on propaganda of the Russian neo-Nazi totalitarian regime and the symbols used by the occupiers in Ukraine. It also states that Russia is a terrorist state. The bill was initiated by 19 deputies from the European Solidarity (Yevropeis’ka solidarnist’) and Servant of the People (Sluha Narodu) parties.

“In terms of scale, approach and ideology, the Russian Federation follows the principles introduced by the fascist and Nazi regimes of Hitler, Mussolini and others. Therefore, the fact that the Russian Federation is engaged in state terrorism, and its political regime has signs of totalitarian and even neo-Nazi, is an obvious fact for the whole world. Recognizing this at the level of law, Ukraine will thus set an example for other countries to join the community of states that perceive Putin’s Russia as a typical neo-Nazi regime,” said in an explanatory note signed by Mykola Kniazhytskyi, MP of European Solidarity.

What is provided by the bill banning propaganda of the Putin’s regime:

Violations will be punishable by up to five years in prison.

However, the use of these symbols will not always be prosecuted, explained in the analytical center of the Institute of Legislative Ideas.

In these cases, the use of prohibited symbols will be considered as legal:

Russian fascist symbols are prohibited even under such conditions:

Earlier, Zaborona reported on the strengthening of criminal liability for looting and collaboration in Ukraine.