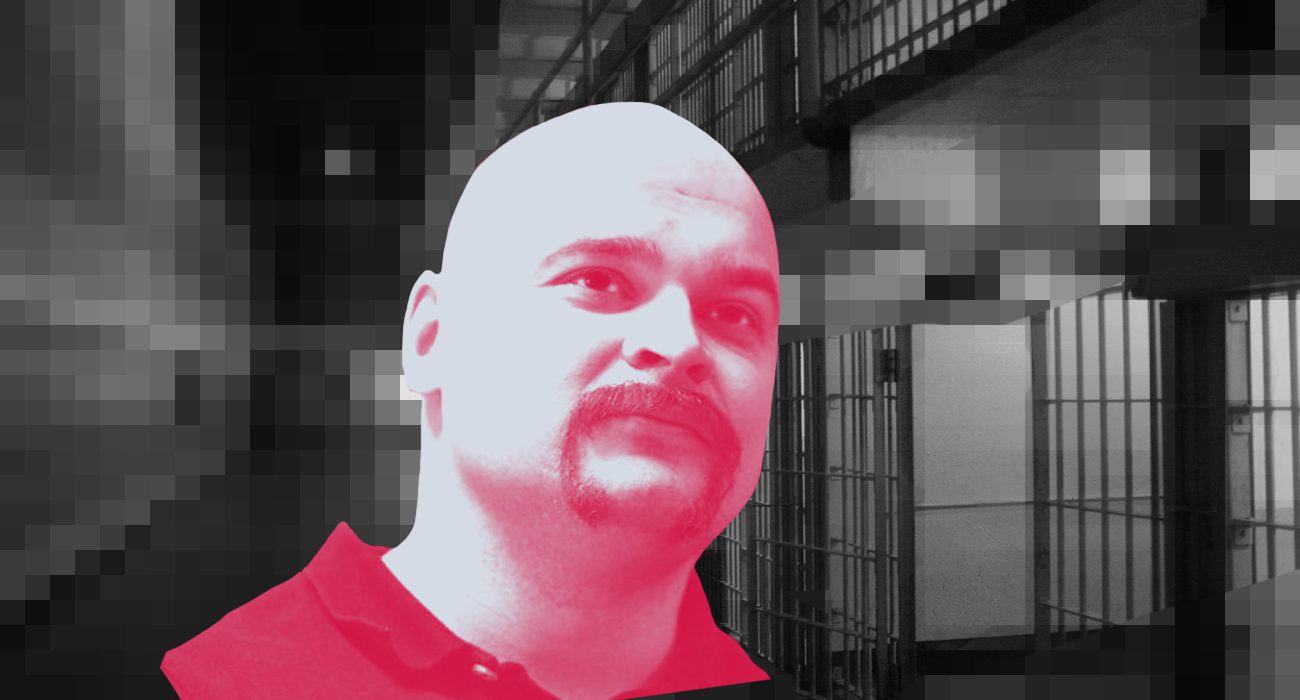 One of the most famous Russian neonazis, Maksim Martsinkevich, nicknamed “Tesak” (Hatchet), has died in a Chelyabinsk detention facility. Initial investigations of his death suggest suicide. Tesak was known formerly for his projects “Occupy-Paedophilia” and “Occupy-Narcophilia”, in which he and his cronies beat and humiliated supposed “paedophiles” and drug dealers on camera. For “Occupy-Narcophilia” Tesak received at ten-year prison sentence. His projects were known outside of Russia, as well: Tesak’s ideas inspired people in Ukraine and Belarus, he himself even carried out “raids” in different regions of the post-soviet space. Zaborona reports on how Tesak influenced the development of far-right violence.

Martsinkevich was one of the most well-known Russian neonazis. In 2005 he founded the organisation “Format 18”. The number eighteen was a reference to Adolph Hitler: “A” being the first letter in the latin alphabet, and “H” the eighth. “Format 18” brought together skinheads who would attack migrants from central Asia and homeless people in Moscow and other parts of Russia. A member of the group would record the attacks on video. In 2010, “Format 18” was banned for being an extremist organisation.

In 2008, Tesak received the first of his three jail sentences. In 2007, Martsinkevich along with his cronies interrupted a debate led by Aleksei Navalny with the journalist Yulia Latynina in the Moscow club “Bilingva”. Tesak was accused of “incitement to hatred with threat of violence” and was sentenced to three years in a penal colony settlement. While in prison, another eighteen months were added to his sentence due to a video in which members of “Format” were seen to enact the hanging and dismemberment of an immigrant.

At the same time, the Russian police investigated another incident: the recorded execution of two men uploaded online in 2007. The video is named “Execution of a Tajik and a Dagestani” and is not staged; the men are murdered in front of a Nazi flag. The organisers and perpetrators have been named as members of the “The National-Socialist Society” (NSS) organisation, which was founded by Tesak. Sergei Korotkykh (“Malyuta”) also helped to create and develop the organisation. Now he is known as Botsman (more details on him later). The members of the NSS were accused of racially-motivated murder.

Upon finishing his sentence, Tesak founded the organisation “Restruct” that was to continue the work of “Occupy-Paedophilia” and would later become his most well-known project. Tesak and his cronies tracked down supposed paedophiles on the internet, contacted them under the guise of a child and arranged a meeting. Tesak would then arrive and begin what he described as “health counselling”. More often than not, this involved pouring urine on his victims or forcing them to perform oral sex on a rubber phallus. All of this was recorded on camera and then published on his YouTube channel.

Tesak was one of the most high-profile neo-nazis in Russia. Before finishing his first sentence, he gave regular interviews with the Russian media. “Mediazone” writes that the channels REN-TV and NTV actively reported on Tesak’s work involving “Occupy-Paedophilia”, regularly broadcasting stories about Martsinkevich’s “safaris”. Tesak himself made money off of views on his Youtube videos, merchandise, and tickets for those who wanted to watch the abuse happen live. Furthermore, Martsinkevich appeared in Ilya Krzhanovsky’s film “Dau” (Zaborona has written about this before, in greater detail). The director assured that he decided to collaborate with Tesak only after being convinced of the safety of everyone else involved in the film’s production. Tesak, however, was accused of “beating and humiliating” the artist Andrew Ondrezhak during film shoots. Krzhanovsky claims that this never happened. In 2012, Tesak was invited to the Ukrainian TV show “One for all”, where he made a nazi salute at the camera.

In 2013, Tesak came to Ukraine. During this period he was fleeing from Russia, where he was being charged for “incitement to hatred” (“Occupy-Paedophilia”, it should be noted, was not mentioned by the prosecution). In Ukraine, Tesak continued his “safaris”; for example, he published a video where he humiliated two young men who, in his opinion, were gay. He called his project in Ukraine “Down with with the Pigeonhouse” (a play on words in which the Ukrainian word for “pigeon” sounds similar to the slang word for “gay”). The most famous attack was against Alexandr Bogun, a participant in the TV show “X Factor”. He was stripped, had his head shaved, and forced to drink several glasses of urine.

Martsinkevich also travelled to Belarus. In February 2013, he went to Minsk with right-hand man Sergei Korotkykh and other followers. He was shortly arrested for attacking a local antifascist activist. In a conversation with journalists from Zaborona, the victim, Artem (he asked his surname not be mentioned for safety concerns), spoke about the run up to the attack. He claims that Tesak and Malyuta humiliated Minsk locals who said they were against Aleksandr Lukashenko and got into a skirmish with a dark-skinned antifascist activist. Afterwards Artem and other members of his antifascist movement poured urine on Martsinkevich and his followers, as one of Tesak’s local supporters attacked Artem with a hunting knife in the back. After this, Artem says that Martsinkevich shot at him with “UDAR”, a self-defence device that fires tear gas.

Until 2014, the Ukrainian and Russian far right kept in constant contact with each other. Zaborona has already written about the Russian neo-nazi Denis Nikitin, who organised mixed-martial arts fights in Ukraine and collaborated closely with the Ukrainian far right. As a result of being in contact with Tesak, followers of the Russian “Restrukt” organisation were inspired to create “Restrukt Ukraine”, as well.

“Up until 2014, Russian and Ukraininan neonazis were in constant contact, and travelled to meet each other” explains researcher of far-right movements Anna Gritsenko. “Tesak influenced heavily on the development of Russian neonazism, and this, of course, was reflected in Ukraine. For example, the fights between neonazis and antifascists have largely moved from Russia to Ukraine.”

Tesak’s influence on Ukraine led to the creation of similar organisations, such as “Grinder” and “Fashionable verdict”, both founded by Nikolai Dulsky. The members of these groups attacked young people who were dressed “abnormally”. The Ukrainian Security Service claims that Dulsky is in collaboration with the Russian special forces and has lived in Russia since 2015.

Since 2014, several Russian neonazis have moved to Ukraine. In January 2014, Tesak was arrested in Cuba for “incitement to hatred”. Since then, followers of the “Restrukt” movement have also begun to be arrested. Fleeing from his sentence, Tesak then relocated to Ukraine, as did one of his closest followers Roman Zheleznov, who had been living in Moscow. Up until 2015, Tesak was involved with the “Azov” movement, but eventually left. “He calmed down a bit and, it would seem, left Ukraine” recounts Anna Gritsenko.

Mikhail Oreshnikov, leader of the Chuvash branch of “Occupy-Paedophilia” came to Kyiv from Cheboksary. In Russia he had been prosecuted for an attack on a policeman during one of his pro-Ukraine protests. In June, 2014, he crossed the state border between Russia and Ukraine and asked for political asylum. He was denied refugee status but claims that thanks to the support of the “Azov” battalion, which he served in, he managed to receive a residence permit, and following that, Ukrainian citizenship. Oreshnikov spoke about how in 2014 he continued to “hunt paedophiles”, but as a part of “Azov”. In response to this, “Azov” has verified this information, but added that it was “Azov” supporters and not “Azov” itself that “caught the paedophiles”.

Incidentally, it was the attacks carried out by “Occupy Paedophilia” that forced transgender human-rights activist Soldada Kovalisidi to flee Russia and seek asylum (unsuccessfully) in Ukraine in 2016. At the same time he noticed that several members of the movement which had attacked him were relocating to Kyiv. In the end, Kovalisidi had to leave for the Netherlands, where he recently received refugee status.

Tesak’s key ally Sergei Korotkykh, a Russian native, spent a long time in Belarus and even studied in a school for the KGB. On arriving in Ukraine, he fought in Donbass as a part of the “Azov” regiment, which he founded with Andriy Biletsky. In 2014, he received a Ukrainian passport from the hands of Petro Poroshenko. From 2015 to 2018, Korotkykh, according to his own statements, was head of the police department for the protection of “objects of strategic importance”. However, in answer to questioning from Zaborona, Minister of Internal Affairs Arsen Avakov claimed that Botsman never worked in the Ministry of Internal Affairs. Several activists and journalists suspect that Botsman is connected to the murder of the journalist Pavlo Sheremet (Zaborona has written about this before, in greater detail).

Currently, Korotkykh influences the organisation “Tradition and Order”. This is an aggressive far-right group that regularly attacks feminists and gay people. The founder and official leader of “T&O” is Bogdan Khodakovsky, who was a participant of the right-wing radical organisation “Revenge”. He ran in the parliamentary elections for the Rada, but was not elected. The organisation posts about its ambitions. “I don’t have clear evidence, but it seems that between Botsman and “Tradition and Order” there is a closer form of collaboration than just communication. We can view this as yet another effect of Tesak’s presence in Ukraine” remarks Anna Gritsenko.

Tesak committed suicide during his third prison sentence. In 2014 he was sentenced to ten years of highly-isolated jail time. In 2021, he was able to apply for parole. Several Russian Telegram channels reported that Martinkevych left a suicide note in which he wrote how he did not want to cause trouble for the adminstration of the detention centre and asked that someone give his wife his personal diary and a book about communism. The note allegedly ends with the words: “Forgive me”.

At the same time, Tesak’s lawyers and relatives do not believe that he committed suicide and claim that Martsinkevich was tortured in prison. “On the 9th he said to his lawyer in Novosibirsk that he had been tortured for the last three months, and forced to sign some kind of confession for murders in Moscow during the 90s. I think that these are bread crumbs leading to the true story. It is imperative that we investigate. I have some very serious doubts that he did this himself.” states Tesak’s lawyer Aleksey Mykhalchik.