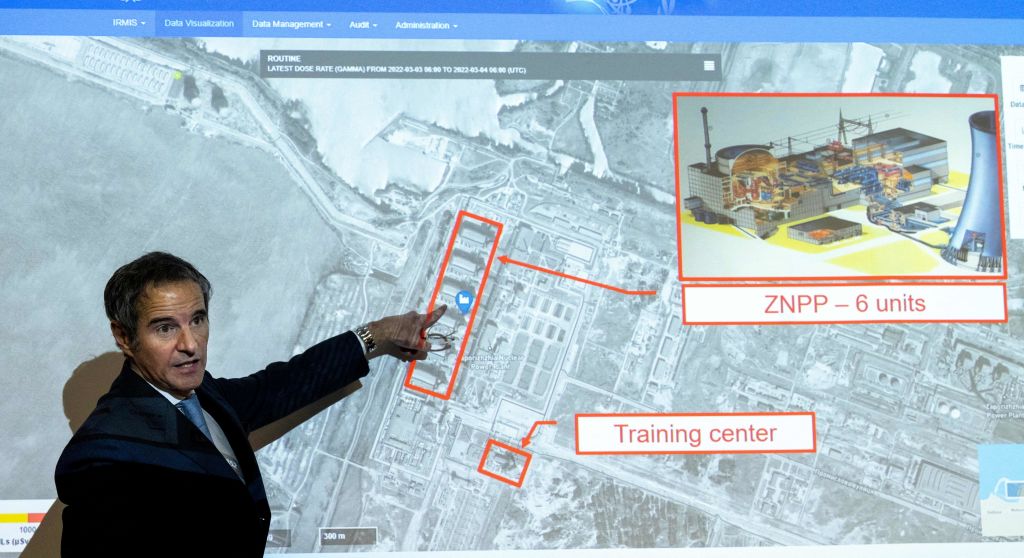 Rafael Grossi, Director General of the International Atomic Energy Agency (IAEA), points on a map of the Ukrainian Zaporizhzhia nuclear power plant during a special press conference at the IAEA headquarters in Vienna, Austria on March 4, 2022. Photo by JOE KLAMAR/AFP via Getty Images

In terms of global threat, the catastrophe at the Zaporizhzhia nuclear power plant (ZNPP) could be several times worse than all previously known accidents at nuclear power plants, including Chernobyl and Fukushima. To save the world from a worldwide disaster, the global community simply has to take the toughest measures, especially NATO and nuclear-weapon states.

Zaborona describes the scale of the catastrophe that could arise due to the careless handling with nuclear facilities at Europe’s largest nuclear power plant.

Nuclear terrorists seized ZNPP on March 4: the scale of threat

“If we consider the fact that such an extremely tricky technical facility as a nuclear power plant has been seized by nuclear terrorists, who are not even acquainted with the basic rules of safe handling of nuclear fuel, the danger threatens not only the whole region but the entire world,” said the President of Energoatom Petro Kotin.

According to him, when the Chernobyl catastrophe occurred, the explosion took place only at one power unit. Moreover, at the Zaporizhzhia NPP have been installed six reactors, so the effect of their damage or unprofessional handling with the nuclear fuel might have six times more catastrophic consequences than Chernobyl.

Ukraine’s appeal to the IAEA

The situation requires immediate real actions and the toughest measures to be taken, including by NATO and the countries that own nuclear weapons.

“We are trying to monitor and control the situation at ZNPP, especially with the exploitation of six power units and the safety of the spent fuel storage facility. However, the situation became extremely threatening and dangerous. Nuclear and radiation safety requirements have been violated. There is very difficult for us to predict the consequences. Measures by the IAEA [International Atomic Energy Agency] and the members of the nuclear club must be implemented immediately”, said Petro Kotin.

Earlier, Zaborona explained that when Ukraine will be able to ratify the Rome Statute, The Hague tribunal would have all the abilities to bring Russia to justice for war crimes as effectively as possible.