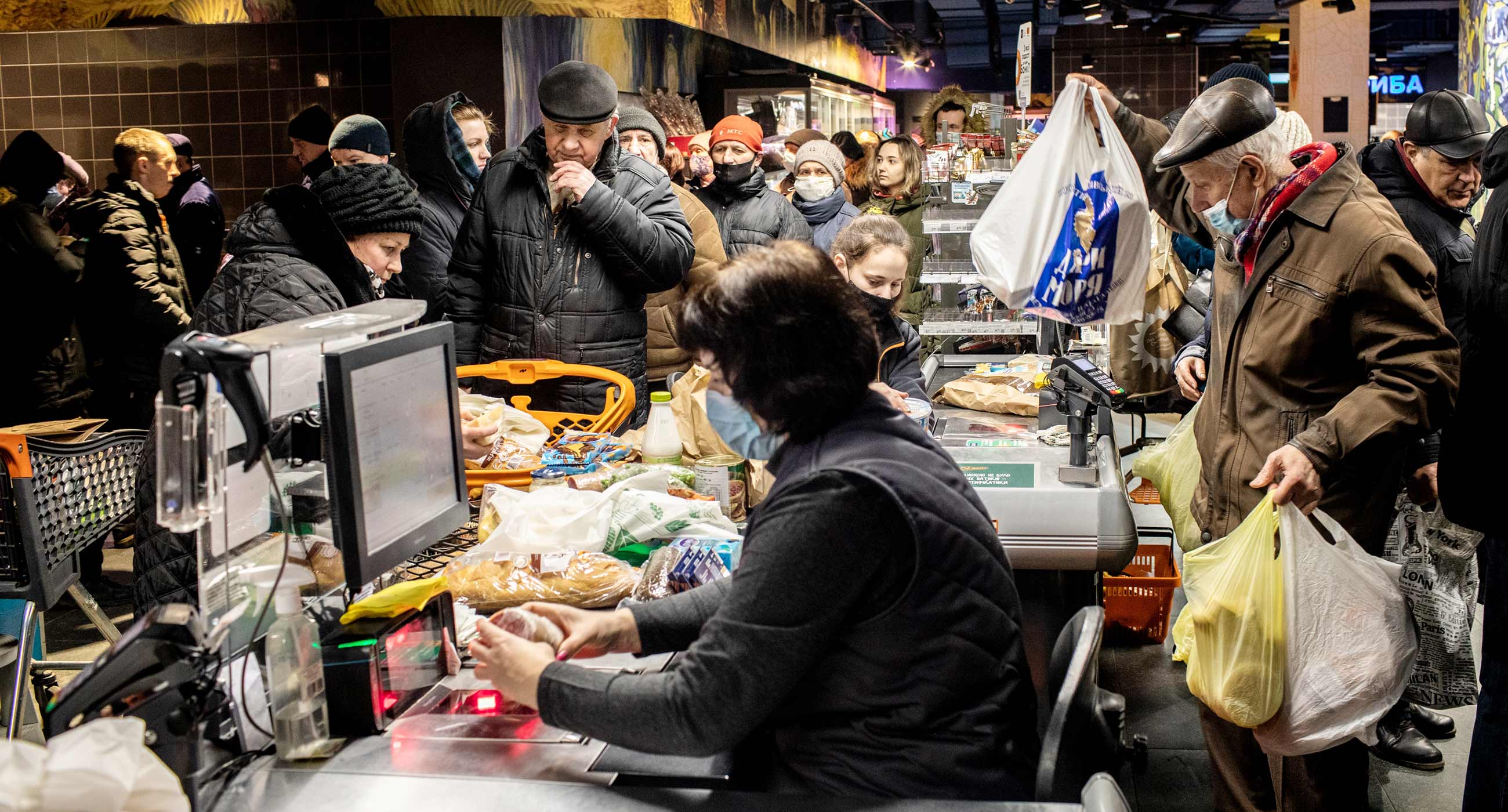 Ukrainians have been living for five days now in an absolutely new reality. Russia attacked Ukraine on February 24 and, since then, for millions of people normal life has stopped. On February 28 Kyiv´s two-day curfew ended and citizens could leave their shelters to go to groceries and pharmacies. Despite long lines and empty shelves it is still possible to buy food and medicines. Some foods, such as bread, are obviously in low supply. Zaborona is informing you how the larger chain stores and pharmacies are operating under war conditions.

The Silpo supermarket chain is operating in all cities. When there is no curfew they are open until 21:00. Up to 500 Hryvnia in cash can be received at the till with a bank card. Opening-hour changes can be accessed on the chain´s Instagram page.

Presently volunteers are manning the cash registers, filling in for salespersons who have been evacuated or are unable to come to work. Distribution centers are functioning normally and supplying stores with necessary products is happening step by step. The chain has its own bakeries so the supply of bread is stable, as reported to Zaborona by the chainˋs marketing department.

The “ATB” supermarkets are open from 8:00 – 20:00 but the hours can change depending on the situation in the city and curfews. In addition, from February 28 the stores will reduce the quantity of products that can be purchased by one customer. The purchase of bread, flour, sugar, salt, pasta and oil will be restricted to two units per customer. That decision was made to avoid artificial deficits and hoarding, explained “ATB”.

“At the moment there are difficulties in supplying groceries, that is with logistics, especially in areas of conflict – the Sumy Oblast, Kharkiv, Kherson, Mykolayiv, Donetsk Oblast. Moreover, there are roadblocks which also delay the delivery of our foodstuffs. We are checking the situation, however and are gradually solving the problem,” explains Serhii Demchenko, head of “ATB” corporate communications.

He also stresses that the chain´s employees come to work even during attacks. In some of the chain´s stores office employees take over work in the sales areas.

Bread can be found in the stores of “KyivKhlib”, for an up to date map look here.

And What About Other Stores?

The “Ashan” stores in Kyiv, Zhytomyr, Dnipro, Kharkiv, Odesa and Kryvyi RIh are open until 18:00. In Lviv, Chernivtsi, and Zaporizhzha normal hours are in effect. Changes in hours are published on Instagram.

Novus stores´ opening hours depend on the regions´ situation. A list of open stores is updated daily and can be seen here.

The EVA beauty supply stores have normal opening hours in most cities. Stores near the areas of conflict will be closed.

Pet-supply stores are mostly closed and the ones that are open have run out of pet products. Pet food can be found in big supermarkets such as Silpo and ATB. What to do when there is no pet food left in the stores, how to evacuate your pet to a shelter? Read more at Zaborona.

Yes, but their numbers are greatly reduced. Which pharmacies are open in Ukraine can be viewed on this map. Pharmacies can be open from 8:00 – 19:00. Updates or current data can be found here. According to Liki24.com a map and a listing of all open pharmacies will be published on their page.

Some citizens have noted that prices in pharmacies have gone up since February 28. Zaborona contacted a pharmacist in Kyiv who assured us that no one is raising prices for medicines during this complicated situation.