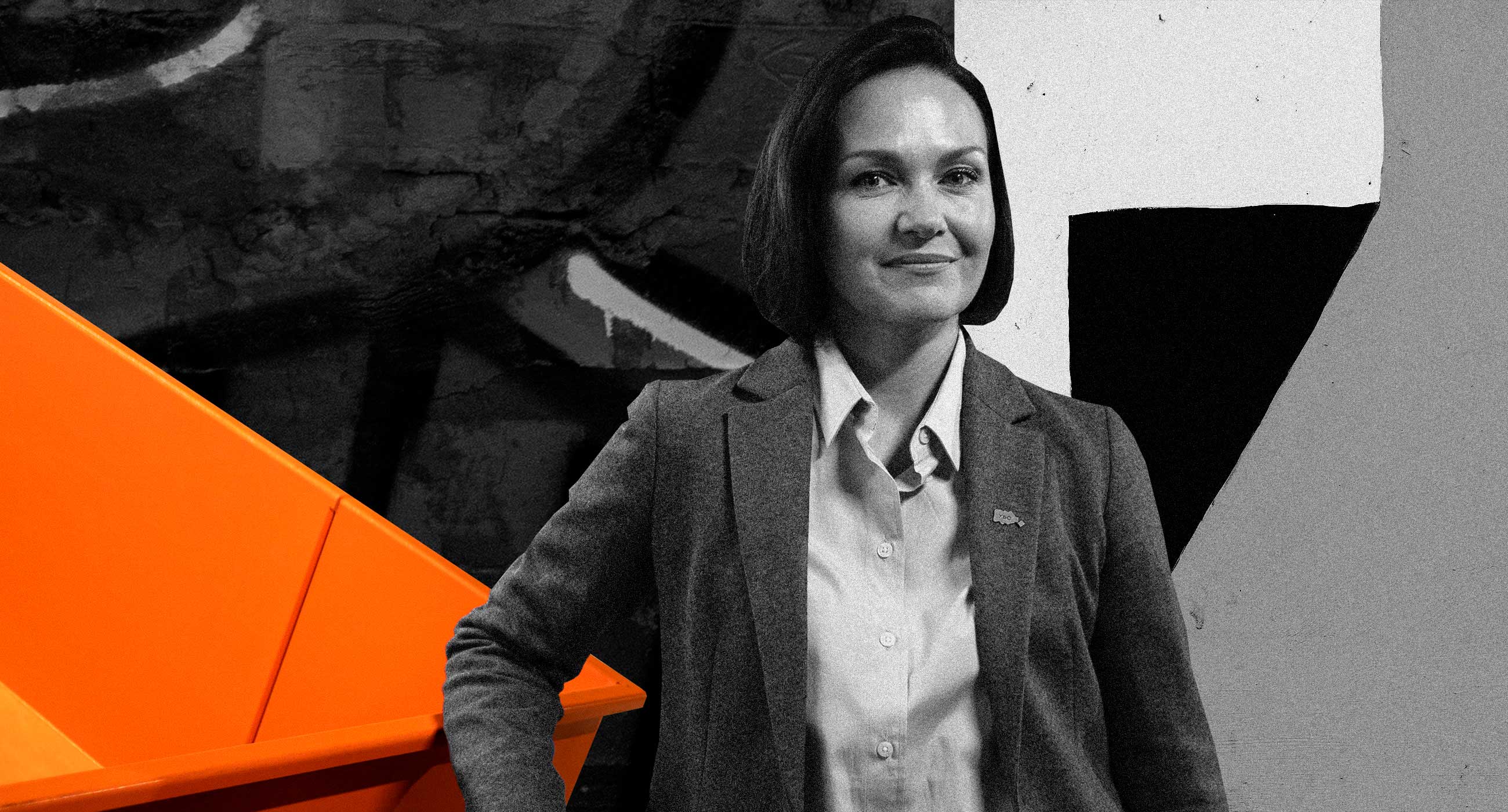 Support Zaborona at this difficult time so that we can continue to inform you and record important stories.

Before the war, many eco-friendly Ukrainians heard of Yevgenia Aratovska, the co-founder of the No Waste Ukraine sorting waste disposal station and an expert in waste ecology. Today, another type of waste in Ukraine has been added to different kinds of waste — destruction. Zaborona Editor-in-Chief Kateryna Sergatskova spoke with Aratovska about how to dispose of these effects of war, whether it is possible to use garbage as a source of energy this winter season, and how sorting garbage can help defeat the occupiers (in the literal militaristic sense).

Video reports of the Prohibition are broadcast on our YouTube channel, as well as on the European Broadcasting Union, which unites 112 public broadcasters in 55 countries.

What does the waste problem look like during wartime?

The destruction waste was added. This issue [of waste disposal] has not yet been resolved because the law [2207-1d, which should also take care of waste from destruction], will come into force only in a year. Now construction waste can be sorted by the efforts of entrepreneurs. But to process them, the local authorities must get involved and manipulate the construction waste: involve the State Emergency Service and sappers. They will make sure that there are no explosive objects among them. The emergency services have to remove the jewelry, possibly the remains of the bodies. Communal companies should also join — these are municipal companies that will take furniture, appliances, and textiles from there, leaving only concrete and bricks for entrepreneurs.

But there is no proactive position. The minister [of foreign affairs] is asking for funds from the governments of other countries to overcome this problem. The leader of the Kyiv region announces the arrival of an Israeli investor. What is our plan: to attract Ukrainian businesses or look for foreign companies?

My team and I often travel to the east and south of the country, where destruction occurs. The emergency services and utilities work there quite quickly…

One of the hypotheses [that can explain the decision to leave the destruction unrepaired] is to show our guests from abroad what terrible things are happening in Ukraine. If everything is cleaned, where will the numerous guests be taken?

Why doesn’t this process [manipulation of demolition waste] start? It is unclear. As far as I know, entrepreneurs have already applied to regional administrations. It is enough to sign a memorandum so that the head of the settlement or local government will allocate a site [for waste processing]. There may not even be an asphalt surface. A processor drives by, sets up the shredding equipment, processes, and takes the material with him.

But do you need permission?

Yes, permission to work in a specific area. There must be guarantees that it is already tested waste that does not contain explosives. If an incident occurs while shredding, someone needs to be responsible. I believe that this is why officials do not like to take responsibility.

Three stages must be passed: a safety check; understanding that there are no money, jewels, and possibly human remains inside; to remove equipment, textiles, and furniture from there — things that are not purely construction waste. Then the waste disposal equipment works.

Tell us what the European integration law on waste looks like, which should bring us closer to European standards.

Before the war, Ukraine prepared to adopt the European integration law on waste 2207-1d. Our organization did not expect that they would start doing it during the war. It happened too fast. We could not influence the opinion of the legislators and warn them about certain risks. Today, we have a law that is not European integration law. Because according to the requirements of the EU Association Agreement, we had to adopt a law in which specific necessary directives will be implemented.

Lawmakers took a different path. We got almost the same law from 1998, which cements the monopoly and in no way opens the possibility for separate collection through the extended producer responsibility system. Legislators approach the creation of laws without understanding what model they will work on. Thanks to this law adopted in Ukraine, we will get another monopoly on waste incineration or waste processing plants. We don’t know what the tariff will be. But it will be much higher.

It is better when the consumer has a choice. When he sorts garbage and produces less waste that will be burned, then he will save more. But no. According to this law, your trash will be taken to the plant without any alternative, and you will pay as much as the plant demands. It is what No Waste Ukraine warned the changemakers about. It is possible that during this period — almost a year before the start of the law — changes will be made.

Will everyone enter into some agreement according to the method of disposal?

It is a question for our administrations, the Ministry, and the legislators. Can they answer it? I’m sure not. It is an improvisation, but the consumer will pay for it. I am convinced that when the European Commission sees this law, it will understand that this is not what it expected to receive.

At the moment, everyone is talking about winter. One way to use garbage is to burn it and get energy. Can garbage significantly contribute to the country’s energy in such a time of crisis?

Indeed, it is possible to use household waste as an alternative fuel to obtain heating or electricity. To build a safe plant that does not produce dioxins — supertoxicants that go into the air through the pipe — severe investments are required. You can burn [garbage] only once. That is, this recycled material will no longer be able to be used again and again, and the circular economy model suggests that we should look for a way to use secondary resources again.

When waste is incinerated, consumers of the service pay money for the incinerated waste. When the recyclables are collected, they are sold and paid for the collected recyclables. The problem is that you can get electricity this way, but the consumer will pay even more. For example, the widespread garbage incineration system in Austria — in the center of Vienna is the Spittelau plant, which burns garbage. Burning one ton of waste costs approximately 200 euros per ton. If we compare this with the cost of landfilling [waste] in Ukraine, it costs 200 hryvnias per ton. It is challenging to convince the consumer that he should pay more for this service because the waste will be incinerated for 200 EUR/ton. There will no longer be such a cheap tariff as burial for 200 hryvnias.

I would like to return to the pre-war state. More and more Ukrainians started sorting garbage. An eco-tendency appeared among active people, despite the authorities not adopting specific laws and norms. Did the war affect this new habit of people?

At the beginning [of the war], No Waste Ukraine was closed for security reasons. We have not worked for almost three months. People started asking us: “When will you open to bringing sorted waste?”; “I already have a full balcony; we haven’t stopped sorting for a day. Can we bring it to you?”; “When will your courier and pickup service start?” We opened at the request of these people. We felt that it existed.

Later, people from Kharkiv who were either passing through or temporarily moved to Kyiv began to come to us with packages of sorted waste. Of course, the flow of people has decreased significantly. Before the war, there were about 200 families per day, and now there are three or four times fewer. It can be seen by the amount of recycled material we collect, by the sales in our store. There were fewer people, and our expenses didn’t go down, so we got rid of a lot of the space we were renting.

I can’t say that people who are used to sorting have stopped sorting. If they stay in Ukraine, they are still looking for opportunities to sort further. Those who went abroad also write to us: “We are so prepared that we are not afraid here, everything is clear. We don’t see such cool solutions here as in No Waste Ukraine because sorting [in Europe] is primitive: not into 40 fractions, but into 5–6.

You’ve lost a third of your audience. What do you plan to do next?

We have another big project ahead of us. We understand that circumstances push us to innovate. Therefore, already this year we will show a new concept of a sorting station, which can be easily opened in any city of the country. We wanted to cooperate with local entrepreneurs — to attract an active community that, for example, lives in Lviv and Chernivtsi. For now, it will be Western Ukraine.

Also, our plans concern other countries: this is primarily the European Union.

What is the infrastructural complexity of implementing such projects?

The second reason is that no one [from businesses located nearby] wants to do business with such a neighbor. When you say that you will deal with waste, that it will be impeccably clean and there will be no smell, the door is immediately closed in front of us because no one believes in it. Such risks will be waiting for us, and they will also be waiting for our partners in other cities, so we decided to create a new concept, which we have been working on for three years.

Do I understand correctly that this concept applies to local communities?

Yes, it allows scaling our values and our history in any locality. There are specific indicators — the number of the population and the percentage of the people that are ready to sort. It is not a super profitable business. You can’t make millions and billions on this, but it is a necessary infrastructure that unites caring people. Therefore, we will expect the support of district local administrations.

And let’s return to the war again. A few months ago, you launched a campaign to collect gestures, used e-cigarettes, and other strange things for the Armed Forces. For what?

We want the Armed Forces to finally expel all the occupiers from our country so much that we are even ready to go from recycling to weapons. We started collecting e-cigarettes at the request of a team of volunteers from KPI. The Armed Forces take chargers [from cigarettes] and then use them to make a system for dropping explosives from drones.

We even came up with a slogan: “Kill the occupiers, not yourself” — quit smoking. He has black humor, not really in our tone of voice, but we joked about it.