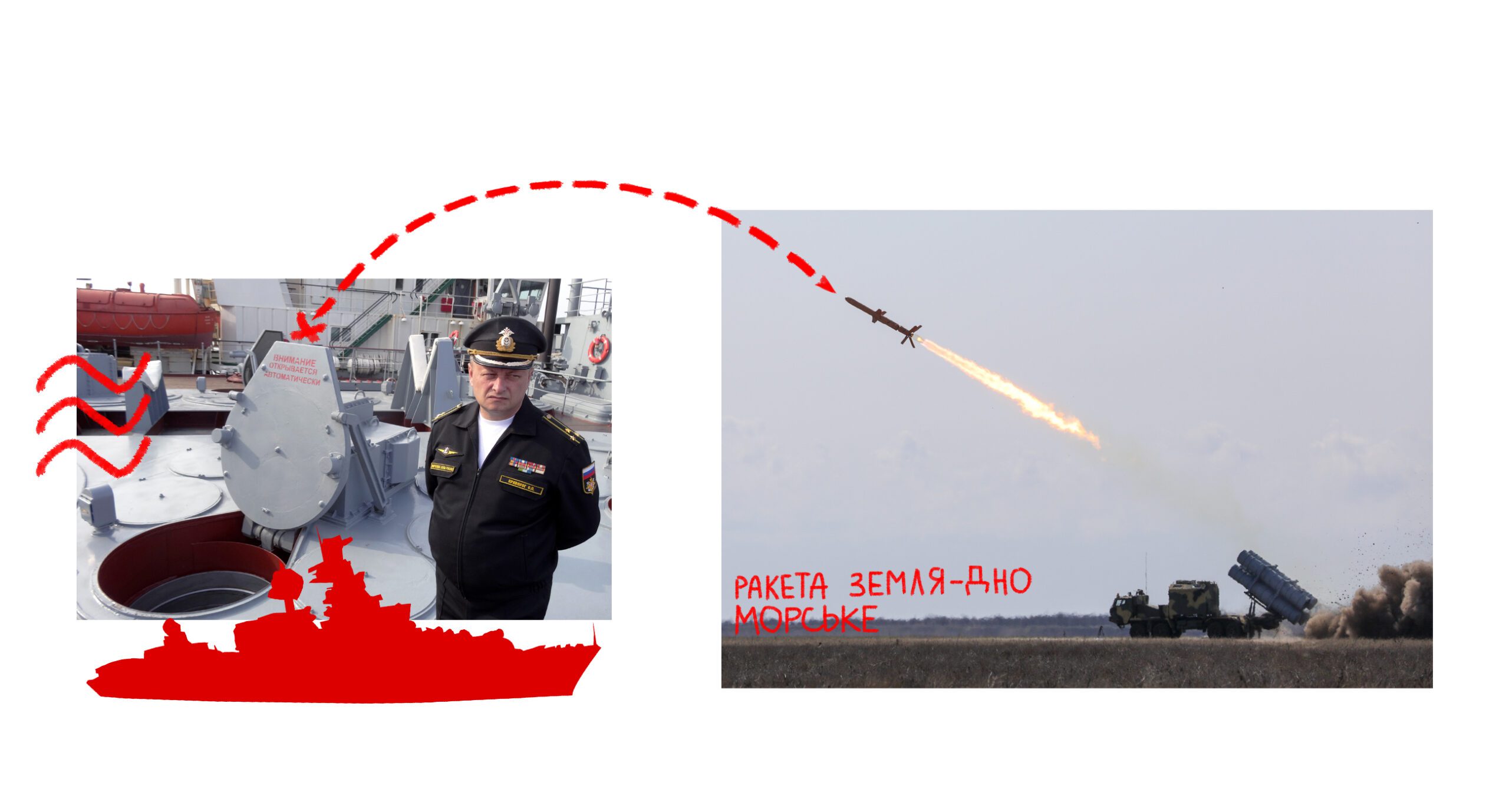 April 13, 2022 will go down as one of the most successful combat days in the history of the Ukrainian army. In the evening, the Ukrainian military destroyed the flagship of the Russian fleet, the cruiser Moskva, with two Ukrainian-made Neptune missiles. The importance and symbolism of this event is difficult to overestimate: Moskva had on board hundreds of missiles capable of shooting down air targets within a radius of hundreds of kilometers around the ship. The cruiser could provide air defense for the entire group of Russian troops in southern Ukraine. But in addition to its practical value, the destruction of such a ship is a military, moral, psychological and reputational defeat for all of Russia. Oleksandr Humeniuk, head of the Zaborona’s investigation department, figured out the main components of Ukraine’s military victory.

What is behind the Moskva missile cruiser?

The Moskva warship was built in 1979 as part of the Atlant project. The Russian flagship is not the only one of its kind – only four ships were built under the Atlant project: the Moskva, the Marshal Ustinov, the Varyag and the Ukrayina. The latter belongs to Ukraine and is under conservation in Mykolayiv.

All four vessels were built and launched in Ukraine at the 61 Communards Shipyard in Mykolayiv. As of today, only two of the four cruisers are afloat: the Marshal Ustinov is part of Russia’s Northern Fleet, and the Varyag is now the flagship of the Russian Pacific Fleet.

The destiny of the Ukraine warship in Mykolayiv was hard enough. Of all the four ships of the Atlant project, the Ukrainian cruiser was the newest. However, this was one of its main problems, because as of 1993, when the ship was transferred to Ukraine, it was at the stage of final construction and was 75% ready. Subsequently, it began to be completed, but at the level of 95% readiness construction stopped.

At first, the main reason why it was not possible to complete the construction was the lack of funding. However, during the presidencies of Petro Poroshenko and Volodymyr Zelensky, the question of completing the ship was no longer raised. Most likely, it was about the most profitable way to get rid of the cruiser, because even in a preserved state, the maintenance of such a large vessel costs the budget millions of hryvnias a month.

As for the practical application of Atlant project cruisers and, in particular, Moskva, one of the main missions of this type of vessels was to provide air defense for troops away from ground-based air defense systems. That is, the Moskva cruiser could provide an anti-aircraft system to Russian troops, which are now stationed in southern Ukraine. In addition, the ship could strike both freeboards and ground infrastructure facilities. It was also planned to place nuclear warheads on the ship, which could be used with the help of P-1000 Vulkan missiles. However, information about the presence of nuclear weapons on the sunken ship has not yet been confirmed.

If we talk about the Moskva technical condition, then not everything is obvious here. On the one hand, the cruiser is quite old – it is already 40 years old. In 2018, there were even rumors in Russia about the possibility of abandoning the use of obsolete ships, because there was not enough money to modernize it. However, later it was decided to carry out major repairs and modernization of Moskva – this process lasted at the Sevastopol Marine Plant for three years.

After the overhaul, the Moskva warship first went on combat duty at sea in August 2020. However, after the destruction of the ship by the Ukrainian military, Russians may wonder whether a quality repair and modernization was really carried out if the hit of two missiles immediately led to the detonation of ammunition and subsequent sinking of the cruiser. No less questionable is the cruiser’s anti-aircraft system, the strength and quantity of which is almost the main purpose of the warship. After all, the Moskva was sunk by the very missiles that the cruiser was supposed to fight.

Where did Neptune come from?

The main culprit of this story, not counting the Ukrainian military, is the Ukrainian-made Neptune anti-ship complex, which consists of several adjacent vehicles and the main one – with missiles on board. The newest basis of this complex is the Neptune cruise missile.

And although many experts call it an analogue of the Soviet H-35 Uran cruise missile, the Neptune is still a new missile with a new approach to manufacturing. These missiles, as well as the whole complex, are entirely manufactured in Ukraine, their production does not depend on Russian spare parts. The only exception is the automobile chassis from the Tatra company (Czech Republic), which replaced the Ukrainian chassis from the KrAZ company due to unsatisfactory test results of the latter.

Oleh Korostelev, General Designer and General Director of the Luch State Design Bureau, said in an interview with Defense Express on the uniqueness of this complex: “All anti-ship missiles are built according to the same scheme. They have a starting engine, which must accelerate the rocket after launch, after which the propulsion engine is turned on. All of them are built according to the usual aerodynamic scheme: front wings, rear rudders. These are the most successful and proven solutions. But in fact all missiles are completely different – different homing heads, engines, body parts, radio altimeters… The set of drawings for the missile is always unique. And Neptune is also a unique rocket of its own design.”

The history of the complex began after Russia’s annexation of Crimean peninsula. At that time, Russia illegally appropriated a significant part of the Ukrainian fleet, as well as the Rubizh coastal missile systems, the only anti-ship missiles in service in Ukraine. After their loss, the then leadership of the state was faced with the urgent need to quickly create and put into service a new anti-ship complex that could replace Rubizh.

The development of a new missile began in 2014, and already in 2015 its prototype was presented at one of the weapons exhibitions. Subsequently, the production of the first missiles and their testing began. In 2020, the Neptune missile system was adopted by the Armed Forces of Ukraine. The sinking of the Moskva cruiser is not the first achievement of a Ukrainian missile. On April 3, media reported that the Ukrainian Neptune missile had hit another Russian military frigate, the Admiral Essen, and that it had been severely damaged.

It has recently become known that the developing of the missile system, including cruise missiles, cost Ukraine $ 40 million. Oleh Korostelev, General Designer and General Director of the Luch State Design Bureau, reported this. Such a price is relatively low for the development and manufacture of a full-fledged new missile system. Instead, the cruiser Moskva alone costs about $ 750 million. Therefore, the destruction of such a target by Neptune once again demonstrates the importance of developing Ukraine’s internal military potential.

At the same time, the attitude of Russians to Ukrainian missiles has changed. At the stage of development of the Neptune system, this rocket was not taken seriously in Russia. The main thesis of the Russians was that the Ukrainian missile is a copy of the Soviet H-35, and it certainly can’t be better than the original. In addition, the Russians stated that Ukraine is not able to supply such complexes for serial production. However, after their successful use, it seems that the Russians have somewhat changed their minds and have become more serious about Ukrainian weapons.

According to confirmed information from Ukroboronprom, on April 15, immediately after the sinking of Moskva, the Russians struck at the Vizar enterprise. This is one of the Ukrainian companies that manufactures components for Neptune missiles. We will learn about the consequences of this strike only after the war, but Ukroboronprom, for its part, assured: “We want to emphasize that despite regular missile strikes and shelling of our defense companies, Ukraine has something to fight with.”