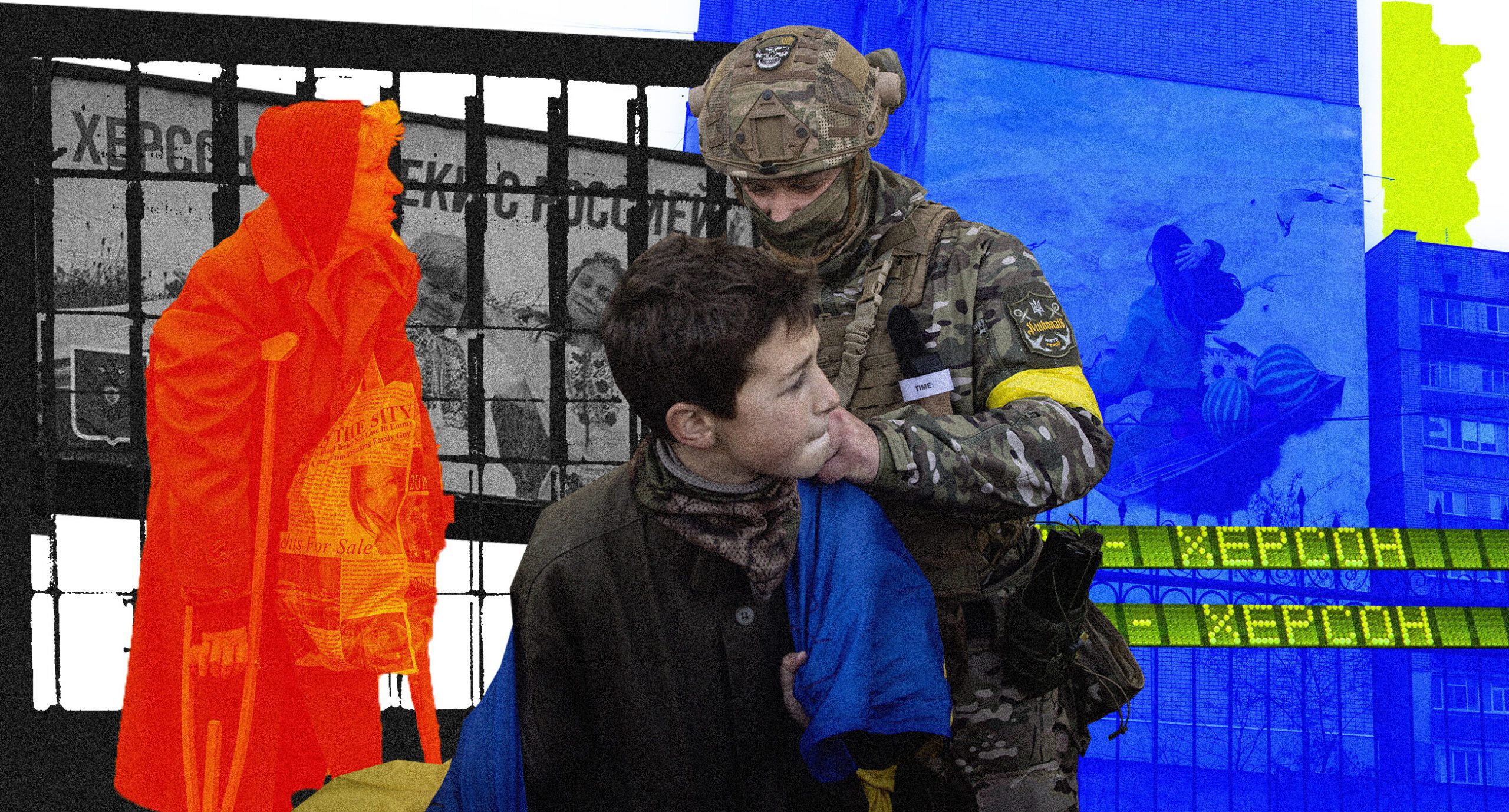 Support Zaborona in this difficult time so that we can continue to inform you and publish important stories.

On 11 November, the Armed Forces of Ukraine entered the territory of Kherson. Russian troops were forced to retreat to the left bank of the Dnipro river due to an effective counteroffensive by the Ukrainian military. In the first days of the de-occupation, Zaborona’s editor-in-chief Kateryna Serhatskova visited Kherson and talked to a resident who had been in a torture chamber, a woman whose husband was shot by thе sniper for violating the curfew, and a man who is called a collaborator.

Zaborona’s video reports are available on our YouTube channel, as well as on the European Broadcasting Union network, which unites 112 public broadcasters in 55 countries, and through Getty Images.

“People often come up to me and tell me that I am a collaborator,” says Volodymyr, a tall man in a white chef’s jacket pulled over a sweater. He wears a cap tucked to the back of his head — combined with a long, semi-gray beard, it makes him look like a Middle Easterner. He cooks meat on the grill right on the street near the former cinema “Ukraine” in the center of Kherson, which recently became a cafe. The kitchen moved to the street because there is no electricity in the city, and the meat needs to be disposed of quickly because the refrigerators do not work.

Volodymyr worked in this cafe for all nine months under Russian occupation. He cooked meat, burgers, and salads. This place was one of the islands of “normality” in the city.

“What do you usually say to that?” I ask.

“People do not understand the difference between politics and business. We worked so that people could feed their families,” Volodymyr says, nodding at the waitresses and assistants (the cafe employs more than twenty people), “We didn’t make money on it, we just survived, that’s all. Orcs also came to us, you can’t escape it. When they have weapons… You cannot refuse. They can find any reason to take you [to the so-called basement].”

Volodymyr claims that the cafe where he works did not pay taxes to the Russians. But he does not own the place — he is only a cook. However, he says, the Russians did not touch him, although it was risky for him to work right under their noses, on the main square of the city. Now he can openly talk about the fact that his son serves in the Armed Forces. At the beginning of the invasion, marine Rostyslav Dzhantymirov was in Mariupol. He defended the city at the Ilyich Iron & Steel Works to the last — and was captured. Volodymyr does not know where he is now, but he hopes he is alive.

There are many such stories among Kherson residents.

Relatives were taken away with a bag on their heads

During the occupation, according to the regional administration, about 80 thousand people remained in Kherson, which is a third of the pre-war population of the city. Some of them made a choice in favor of Russia: took a Russian passport or helped in organizing a “referendum” on the accession of the Kherson region to the Russian Federation. The exact number of such people is still unknown — the SBU officers are interviewing the locals every day.

Now, when the city is liberated from the occupants, residents talk about such people.

“I remember how [my neighbor] was campaigning me for the ‘referendum’ to go with her [to vote],” says Iryna, a pensioner from Kherson. I meet her on the street on the outskirts of Kherson: she came out of her house to look at the police and military who started arriving in the city. She has blue vinyl gloves on her hands to avoid getting dirty while she cleans the garbage in her house because there is no water in the city.

“I said: I will not [vote in the ‘referendum’],” Iryna continues, “She [the neighbor] left. She voted for them, but her husband was against this. I met her [after the liberation of the city], and she said there was such a scandal at home: she got a Russian passport, but her husband did not want it all. Now, she says, I don’t know what will happen to me.”

Svobody Square became the center of attraction in the city after the occupiers fled. Residents of Kherson come to the central streets to see friends, to catch mobile communication (it works better in the center than in other parts of the city), and to tell stories they have been keeping inside for months. In the center you can meet dozens of journalists from all over the world — they came here to tell how the recently occupied city is returning to Ukraine. Local residents do not get tired of talking about what they saw and heard.

“My wife was once taken away with a bag on her head,” says Oleksandr, a middle-aged man in a thin jacket with a mobile phone in his hands. He is waiting in line outside the Point of Unbreakability tent, where he can charge his gadgets and warm up. He smiles as if he is going to talk about something ordinary.

“They came and took her away like that — “for connections with the Armed Forces of Ukraine”. They kept her for a day. But we managed to release her quickly, although we did have acquaintances in the Armed Forces and we were waiting for the return of Ukraine and believed that it would happen.”

The main place of detention was a detention center in the northeast of the city, in the area that locals call “sklotara” (“glassware”) because there is a wholesale base of glass containers. Yevhen, a resident of Kherson, was held in this detention center during the occupation. He was arrested for theft before the Russians arrived and released in April. But in the summer the man was arrested again — this time it was the occupiers who kept him in the “glassware” until October.

Yevhen says that every day from morning to evening he heard screams: people were tortured to extort evidence of cooperation with the Armed Forces or to force them to work for the Russians. He says that the detention center workers beat him with batons and tortured him with electric shocks — as they did to everyone who entered the place.

A bullet in the forehead for the curfew violation

A thirty-year-old woman covers her face with a hood and puffs on an e-cigarette. She brought her six-year-old son to Svobody Square to get away from bad thoughts and play with other children. Her name is Kateryna, and one day her family broke the curfew.

The woman says that one evening in June she was driving a car with her husband and son on her lap in the Tavriysky district in the north of the city. The curfew started at ten o’clock. It was 22:10 when Kateryna suddenly felt herself being pushed into the seat. The car was gaining speed. She turned her head to the driver’s seat — her husband was lying on the steering wheel. His foot was pressing the gas pedal, and the car crashed into the wall.

“The Russian sniper hit him right in the head,” Kateryna says, ‘Didn’t he see that a civilian car with a child was driving? We specially hung rags around the car [to make it visible] that it was a civilian transport, we were driving 20 kilometers per hour with the lights on. Then, when [the Russian soldier] opened the car, he was very surprised to see me with my son.”

Kateryna’s husband died on the spot. She herself suffered numerous fractures, her child got open leg fractures and a ruptured spleen. When she came to her senses in the hospital a few days later, she went to write a statement to the police, where Russians and local collaborators were working at the time. There she was told that she could not talk about the sniper and the circumstances of the accident, otherwise, it would be worse — officially her husband died of a heart attack.

“This happened not only to me,” says Kateryna, “My uncle was shot by a sniper when he was going to work in the morning and the curfew was not over yet”.

The woman is still afraid to tell her story: she is afraid that the Russian military can find her and take revenge for not keeping silent. Kateryna has already filed a complaint with the Ukrainian police, but she does not expect the killer to be punished — but at least, she says, it will be one of the many pieces of evidence of what the occupiers did in Kherson.

“How to live with this?” Kateryna asks, “My son keeps asking me if it will hurt if he drowns. It is hard for him without his father, he suffers because of this, but all I can do is talk to him.”

Liberation is only the beginning

While fleeing Kherson, Russian troops destroyed all critical infrastructure. Because of this, the city has no electricity, water, or heat. Many locals believe that the Russians did this to make the residents feel the difference between life under occupation, when there were no problems with basic needs, and life after liberation. Now they are forced to plan their day in such a way as to have time to collect water, find food and charge their phones, and also to warm up because the temperature in the houses is already dropping to critical levels. It is freezing rain outside.

“Without water, without light, without heat, but without them [occupiers]! We will survive,” says an old woman on the outskirts of Kherson, where the first ATB store has just opened. And others repeat it like a mantra.

However, there is another difficult challenge. After the withdrawal of Russian troops, the occupiers are located directly opposite Kherson, on the left bank of the Dnipro. They are shelling the city with cluster shells and mines, and snipers are working in the area of the island and Antonivsky bridge, which was blown up during the escape. It is becoming dangerous to stay in these areas of the city. The Ministry of Reintegration of Ukraine announced voluntary evacuation from Kherson and Mykolaiv due to constant shelling and problems with civilian infrastructure. However, most Kherson residents remain at home.  “This is my home, and I will not leave here,” says Volodymyr, a cook, “I am waiting for my son to return from the war. And for us, this war is not over yet.”