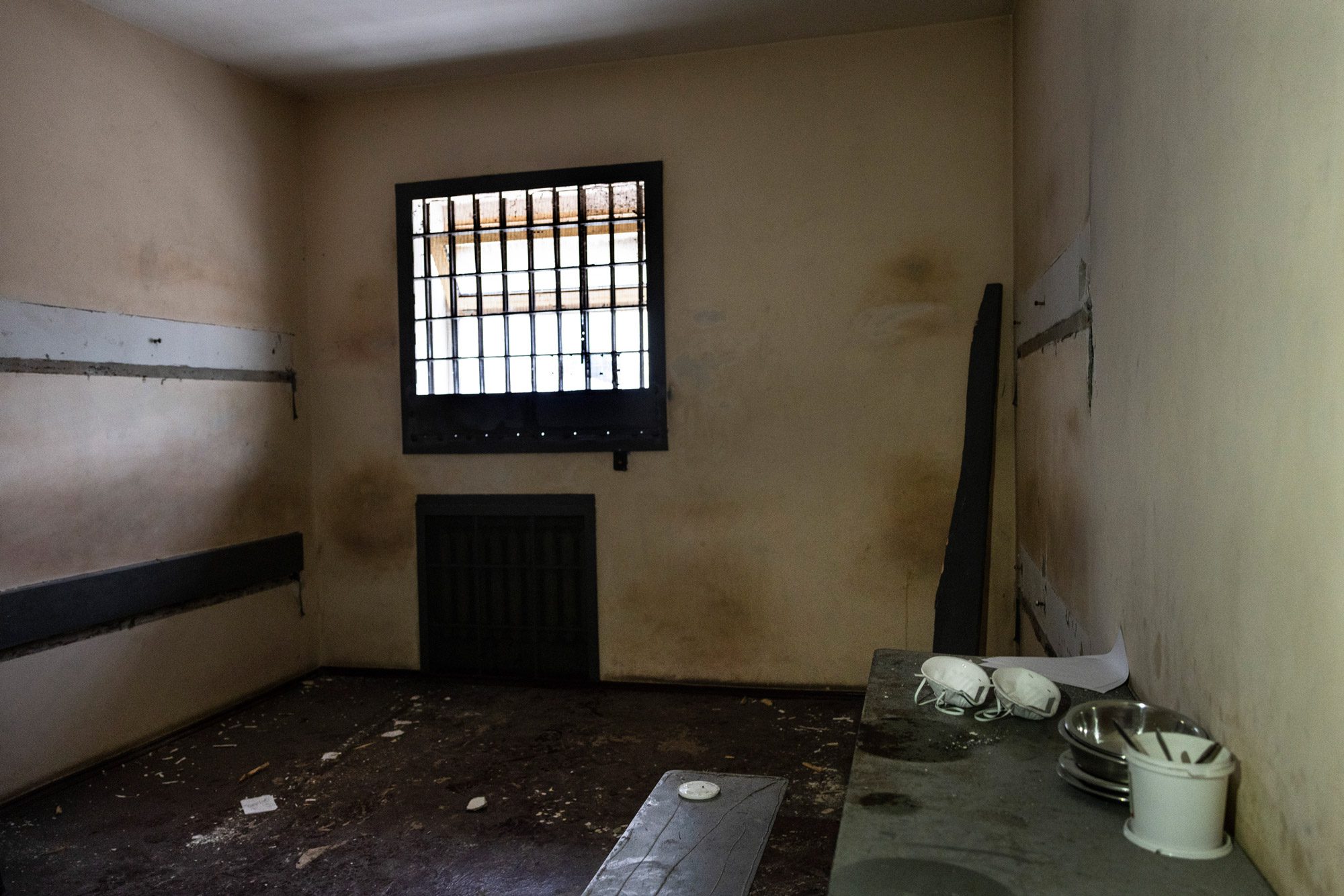 A prison cell inside a building housed a Russian prison and alleged torture chamber. November 19, 2022, Kherson, Ukraine. After withdrawing after nine months of occupation, the Russian military left the southern city of Kherson without a TV tower, power grid, electricity, or water, albeit in a state of renewed hope for Ukrainians. Photo: Paula Bronstein / Getty Images

The hero city of Kherson could not resist the onslaught of Russian troops: the command drove a massive amount of machinery and weapons from Crimea on the morning of February 24 to Zaporizhzhia, Mariupol, and Donbas. During the months of occupation, likely, thousands of residents of the peaceful city passed through the torture chambers. During the enemy’s rule, investigators and the mass media received isolated facts of abuse; after the liberation of Kherson, law enforcement officers and journalists recorded terrible testimonies daily.

They were reporting on the horrors that Ukrainians had to experience in the Russian hell. In the first days of de-occupation, the chief editor of Zaborona, Kateryna Sergatskova, visited Kherson and found out about the crimes of the Russians straight from the victims.

Torturing and humiliating for AFU (Armed Forces of Ukraine): Sklotara in Kherson

Russian troops reached Kherson a week after the full-scale invasion. In a few days, the enemy broke the territorial defense forces with a numerical advantage in weapons and strength, so beginning from March 2022, the regional center was under occupation and hoped for the Armed Forces of Ukraine. On November 11, the Ministry of Defense of Ukraine reported that Kherson was liberated after eight months of Russian occupation.

«Freedom Square became the center of attraction in the city after the occupiers fled. Kherson residents came out to the central streets to see their friends, catch a mobile connection (it works better in the center than in other city parts), and tell their stories, which they have kept with them for months. Residents don’t get tired of talking about what they saw and heard», –  Kateryna Sergatskova shares in her article The official cause of death – heart attack. So said the sniper. Zaborona visited de-occupied Kherson and told stories from the city.

«My wife was once taken away with a bag on her head. That’s how they came and took it away – «for connections with the AFU.» She was in captivity for a day. It happened to liberate her quickly, although we had acquaintances in the Armed Forces, and we were waiting for Ukraine’s return and believed that it would be so», –  said Oleksandr.

The central place of detention was an isolator at wholesale stores in the city’s northeast in an area that the locals call Sklotara. Yevhen, a Kherson resident, was kept in this detention center during the occupation: the police arrested him for theft even before the arrival of the Russians, and he was released in April. In the summer, he was arrested again by the Russians, who kept him in Sklotara until October.

He says that the detention center workers beat him with batons and tortured him with electric current – they did the same to everyone. Yevhen says that every day from morning to evening, he heard screams – people were being tortured to extract information about cooperation with the AFU or to force them to cooperate with the occupiers.

While the Russian army and collaborators ruled the city, a curfew was introduced here. The violation was severely punished: beginning with being sent to an isolation cell or immediately to the torture chamber or being shot on the spot.

Kateryna, the Kherson resident, told Zaborona about one of the many cases. In June, with her husband and son, they drove around the Tavria district. The curfew started at ten o’clock. It was 22:10 on the clock when suddenly, Kateryna.

«I felt myself being pushed into the chair. The car gained speed. She turned her head – her husband was lying on the steering wheel. His foot pressed on the gas pedal, and the car crashed into the wall. A Russian sniper hit the husband directly in the head. Did he not see that a civilian car was driving with a child? We specially hung the car with rags [so that it could be seen] that they were civilians, driving 20 kilometers per hour, with the lights on. After [the Russian soldier] opened the car, he was stunned to see me with my son», – says Kateryna.

The husband died on the spot, the woman suffered multiple fractures, and the child suffered open leg fractures and a ruptured spleen.

A few days later, Kateryna regained consciousness in the hospital and applied a statement to the police, where Russians and local collaborators were working. They told her that it was impossible to talk about the sniper and the circumstances of the accident, as it would be worse otherwise – officially, the husband died of a heart attack.

«How do I live with this? The child constantly asks: will it hurt if drowning himself? It happened not only to me. A sniper shot my friend’s uncle when he was commuting to work in the morning when the curfew had not yet ended», – the woman shares.

She has already filed a complaint with the Ukrainian police. Still, she does not expect that the murderer will be punished [because it is unknown how to identify the person and where to look for him]. But this will be one of the many testimonies of what the occupiers did in the only regional center they managed to capture in the new war phase.

Earlier, in photographs from Kherson, Zaborona reported the first days of the freedom celebration not only by the Kherson people, the Ukrainian army, and journalists but also by the whole world.