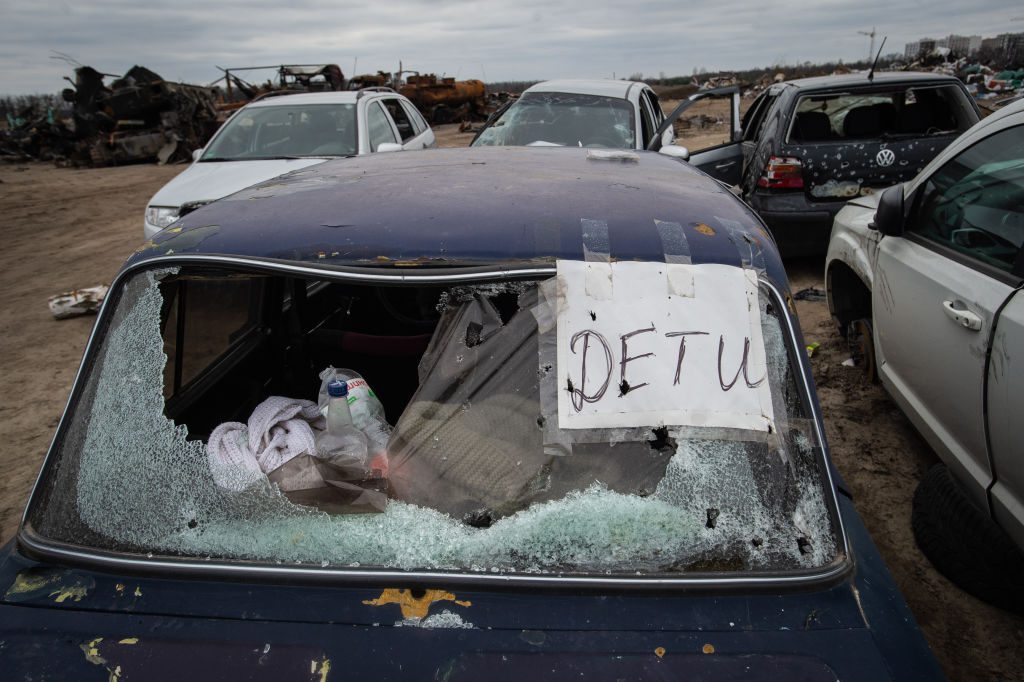 A car with a «Children» sign and bullet-riddled glass lies among the rusty remains of a Russian armored column destroyed by Ukrainian forces. Bucha, April 20, 2022. Photo: Scott Peterson / Getty Images

Bucha’s executioners from the 64th Separate Motorized Rifle Brigade (OMBR) of the 35th All-Military Army of the Russian Federation are natives of the military unit «Mlechnik» of the Khabarovsk Territory. Russian conscripts and their parents called the place hellish because of the constant hazing and horrible conditions of detention..

Zaborona tells about the investigation of the Russian media «Proekt».

For more than a month, the Kyiv region was occupied by the Russian military, which tried unsuccessfully to break into the capital. After the liberation of the region, terrible crimes committed by the occupiers in Ukrainian cities and villages, including Bucha, were exposed. The atrocities committed in the suburbs of Kyiv involved the 64th Separate Motorized Rifle Brigade (OMBR) of the 35th All-Military Army, based in the village of Knyaze-Volkonskoye in the Khabarovsk Territory of the Russian Federation, the Russian newspaper «Proekt» reports.

Khabarovsk region ranks third in Russia in the number of sentences handed down in cases of crimes in the army. The second is the Primorsky region, where the 127th Motorized Rifle Division of the Fifth All-Military Army, which also took part in the fighting in the Kyiv region, is stationed in the village of Serhiivka.

On April 4, 2022, two days after the deoccupation of Kyiv region, the brigade was withdrawn from Ukraine to Belarus. It was stationed near the town of Mozyr, but a few days later the Bucha executioners were transferred to Ukraine again. According to the Ministry of Defense, they were going to be sent to one of the hottest spots to get rid of witnesses to the tragedy in Bucha.

On April 18, 2022, President of the Russian Federation Vladimir Putin signed, a decree awarding Bucha executioners. The 64th Brigade «for Mass Heroism and Courage» was awarded the rank of Guards.

On April 23 it became known that the newly made guardsmen were operating in ​​the village of Izyum. Military volunteer Roman Donik said that the Russian military tried to storm the 93rd OMBR of the Armed Forces of Ukraine «Kholodnyi Yar», but suffered serious losses.

Mlechnik: Conditions in the Unit and Crimes

The unit where the 64th separate motorized rifle brigade of the 35th Army of the Russian Federation is stationed has the call sign «Mlechnik». Conscripts called it a hell of a place because of the horrible conditions of detention and abuse.

Parents of servicemen who served in the 64th Brigade in 2017-2019 say that they feed poorly in the unit, it is cold in the barracks, the uniforms look old and out of size. «Before some inspections, some soldiers are buried in baths, forests and other places. They may not want to intimidate the soldiers with their appearance because their uniforms, berets, and physical condition leave much to be desired», — «Proekt» quoted the mother of one of the conscripts as saying.

Field exercises in the unit are held twice a year at the training ground, where soldiers live in tents and wash in an earthen pit in winter and summer. The brigade does not have a medical unit, so a sanitary instructor treats conscripts.

Beatings are not uncommon in Mlechnik. Both conscripts and officers are involved in bullying. Soldiers from national republics get lost in gangs to take money and phones from colleagues. Thus, in 2019, a conscript from Mlechnyk was sentenced to 1.5 years in prison for bullying other conscripts and extortion, and in February 2022, a senior ensign and sergeant beat six privates. The drunken ensign checked the numbers on the bedside tables and slippers of the soldiers and beat those who did not match with a stick.

Soldiers are trying to flee the unit altogether or gain commissions. Because of this, they eat chlorine and swallow needles, and in 2014, conscript Oleksiy Snakin committed suicide. According to «Proekt», Major Mykola Chabanov beat him with a broomstick and forced him to wear a bulletproof vest and gas mask around the clock, and shortly before his death he ordered the military to buy a new computer. The court first sentenced Chabanov to probation, and only after human rights activists intervened was the major sentenced to 3.5 years in prison with deprivation of the right to hold senior positions for two years.

In 2015, a group of servicemen killed a civilian in Knyaz-Volkonsky. The witness was the cook of the unit, who passed by and stood up for the victim. The cook shot one of the attackers with a traumatic weapon and dragged the beaten man into a car, where he died before medics arrived.

Earlier, Zaborona spoke about the liberation of Kyiv region by the Ukrainian military on April 2, 2022 and about the evidence of terrible atrocities committed by the occupiers.