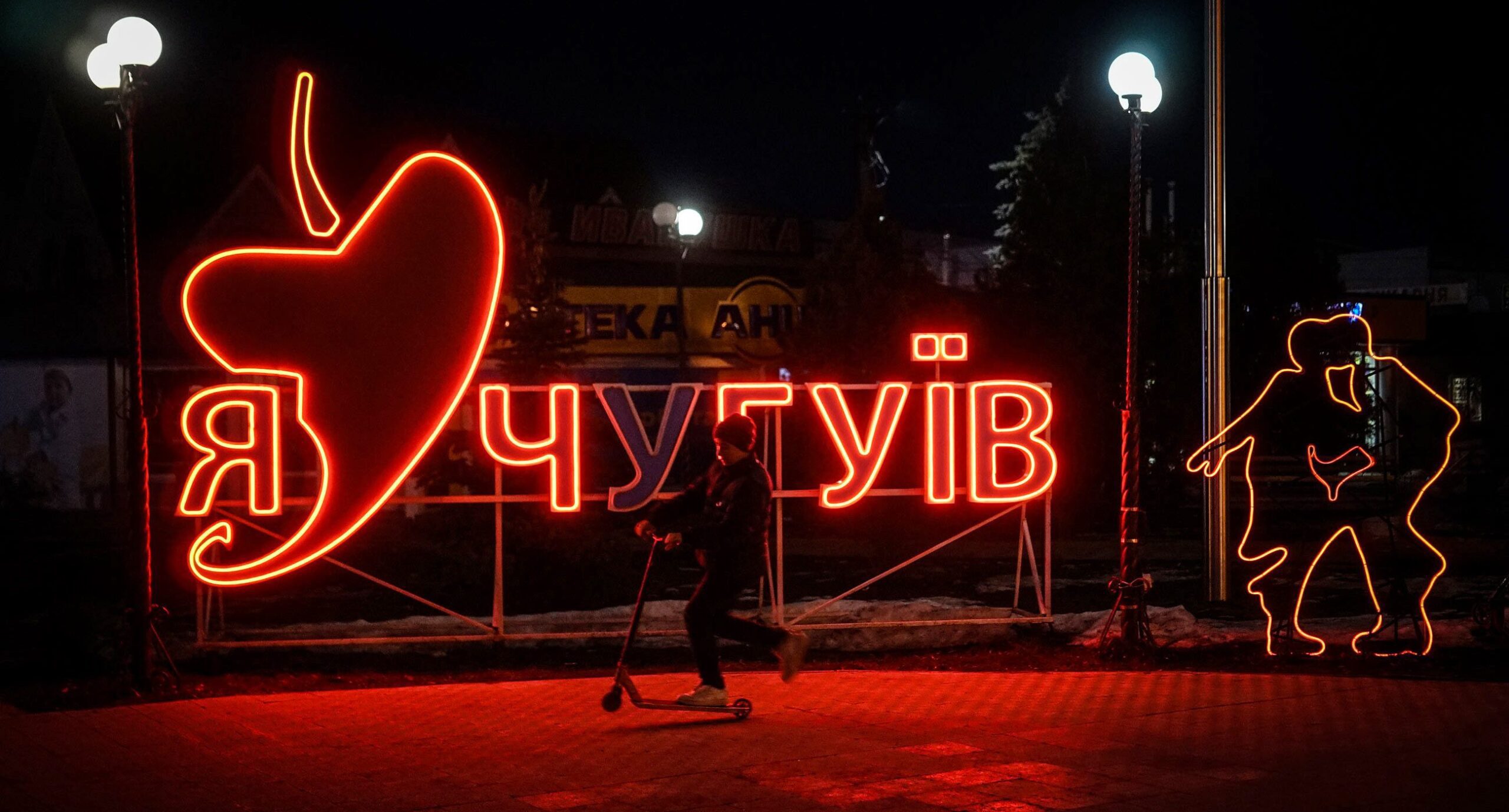 Chuhuiv is a small town an hour’s drive from Kharkiv. In peacetime, just over 30,000 people lived there. Now there are about five thousand left – the majority of the population was evacuated to safer places. Despite the fact that the bombardment of Chuhuiv is no longer as active as in the first weeks of the war, Russian shells are still killing people there – the last time it happened on Easter. Zaborona journalist Polina Vernyhor spoke with local MP Dmytro Drobot about the war, Russian equipment in the town and volunteering.

Dmytro Drobot is a local MP and analyst at the Kharkiv Anti-Corruption Center. He tells that he and his colleagues were preparing for a full-scale invasion in advance. About two months before February 24, donors from the Anti-Corruption Center in the United States and Europe warned him about the escalating situation on the borders with Russia and Belarus. The first recommendation, Dmytro recalls, was related to the fact that public activists, including anti-corruption officials, are the first on the “hit list” of the occupiers.

“They wrote that we should leave in the first minutes. Especially since this is the Kharkiv region, where the Russians were not as scary as the internal collaborators who could give them tips. So about a month [before] it all started, we talked to colleagues about what we were going to do,” the man recalls. “We prepared, not believing that it would happen. But we had refueled cars, discussed routes, where and which way we would go, we had suitcases prepared, and there were also tactical medical kits.”

On February 24, Dmytro woke up at 5:11 a.m. from the sound of explosions. The first blow was struck at Chuhuiv airfield, the second – at warehouses on the other side of the town, in Volynivka. At first, through a dream, he thought that it was tanks firing at the training ground – before that, the military fired there every week. But then he realized that it was early enough for training.

He got out of bed, picked up the phone and read the first message from a colleague, a member of the Chuhuiv Town Council. The message said that Putin had declared war on Ukraine.

“I felt so surreal and I just couldn’t believe it had happened. But I still heard explosions on the outskirts of the town. My wife woke up – she was seven months pregnant. I called my colleague Dmytro Bulakh, who was in Kharkiv at the time. He said the situation was the same there. We agreed to follow the instructions we spoke about earlier. I woke up three children, we took two suitcases and got in the car,” says Drobot.

The family went to a place where it would be calmer. Unlike Kharkiv, many people left Chuhuiv on the first day of the war. According to the MP, most of those who were more or less active in the public sector left, but this is not a large part of the population. People were frightened and at first could not come to their senses.

On the second day of the war, Russian tanks entered Chuhuiv. They didn’t stay in the town, didn’t occupy administrative buildings and had almost no contact with locals. Dmytro Drobot says that there was virtually no resistance among the citizens, so the convoy simply drove freely towards Kharkiv, where it was soon defeated by the Ukrainian army. The lack of military defense, says the MP, is an order of the leadership, saying that the army should not waste energy on fighting in the region and go immediately to defend Kharkiv.

“Later, the media reported that Chuhuiv was liberated from the occupiers, but in fact there was no occupation. They [the Russian occupiers] could take the town if they wanted to. Chuhuiv was in a difficult situation because there was zero information and the military administration did not report anything. I constantly answered people’s calls, published my phone number in the public domain, and constantly received some information from assistants. But in the first three days there was a feeling of helplessness: you can’t change anything and you can’t do anything. I was engaged in accommodating our guys [Ukrainian soldiers] who had left Chuhuiv and had nowhere to spend the night. They worked mainly as gunners, because they were related to the artillery and knew the area of ​​the Chuguiv direction, where Russian tanks were moving,” said the MP.

Three days later, the locals were already very scared and wanted to leave the town. But then there was a lot of news about cars being shot at on the roads in neighboring villages. So Dmytro and his team built a more or less safe route to leave and not be encountered by Russian equipment. There was only one road from Kharkiv region which was used for delivering humanitarian aid and military weapons. It was possible to leave the town by the same road.

However, Dmytro said that the majority of people left later, when Deputy Prime Minister Iryna Vereshchuk announced that the Kharkiv region should be evacuated. Unlike Kharkiv, Chuhuiv is now almost empty: only the military or those who could not leave for personal reasons remain. According to the Town Council MP, out of more than 30,000 people, about 5,000 remain in the town.

The shelling in Chuhuiv at the beginning of the war was very active: as Chuhuiv Mayor Halyna Minayeva said in an interview, it did not stop for a day. The Russians hit not only the military facilities, but also the housing estates. One of the first victims of the war in the town was a 14-year-old boy who was about to leave with his family. The boy’s parents were in the house when their son and his puppy ran to the car. At that moment, a shell fell into the yard.

Another victim of the shelling, Olena, became famous for a photo with her bloodied face – a woman was injured by glass from window panes shattered by a shock wave. When the photo went viral, Olena was declared the “face of war.” According to Chuhuiv’s mayor, the woman herself stated that she wanted to be the face of peace, not war.

Now Chuhuiv is still being bombarded, though not as actively as Kharkiv. According to Dmytro Drobot, this happens once every 3-4 days. The last shelling was on April 27 – two people were injured. Prior to that, the town was heavily shelled on Easter – one person was killed and three others were injured. One of the shelling killed the family of a boy who was friends with Dmytro’s son and lived in the neighborhood.

Dmytro Drobot returned to Chuhuiv twice. He left his family in a safe place and began to volunteer. A Territorial Defense brigade was organized in the town, and he began to help them. At first, there was a need for transport, as cars could not drive due to snow and ice. Then Dmytro and his friends found two cars in Derhachi in the Kharkiv region and brought them to Chuhuiv. These cars were given away by local businessmen, but when leaving the town, they pierced the tires so that the Russians would not take the cars. The necessary tires were found only in the center of Ukraine, where Dmytro was nearby. He loaded them into his car and drove to his hometown. Subsequently, 10 more cars were obtained and repaired – they were given to the military.

“When I came back for the first time, it was very scary. In 2014, I was also under fire, but not under such massive and regular. Even if they shoot a few kilometers away, explosions are felt all over the town. That is why it was a dangerous story in both Kharkiv and Chuhuiv. My friends and acquaintances at the time somehow got used to it and sometimes they even joked. I got this habit too, and at some point I realized that I could not change anything – I just do what I do, and then we’ll see,” he said.

The first such trip lasted several days, after which Dmytro returned to his family. He later transferred his relatives to Poland, where he bought military equipment for Chuhuiv soldiers. So the second trip took place, but it lasted longer: Dmytro lived with the Territorial Defense brigade, traveled with them on business.

“I was most of all struck by the fact that there is no black and white. Everyone supports and helps each other. There is no question “Can I do something or not?”, there is a question “When and what is needed?”. Whatever the guys say, we, the volunteers, do and do everything,” explains Dmytro Drobot. ”Most of the inquiries are related to military affairs. The guys often find all sorts of separatists, people who are engaged in helping the enemy, but mostly they defend the territory of Chuhuiv region – they stand at checkpoints, go on reconnaissance, are engaged in military affairs. ”