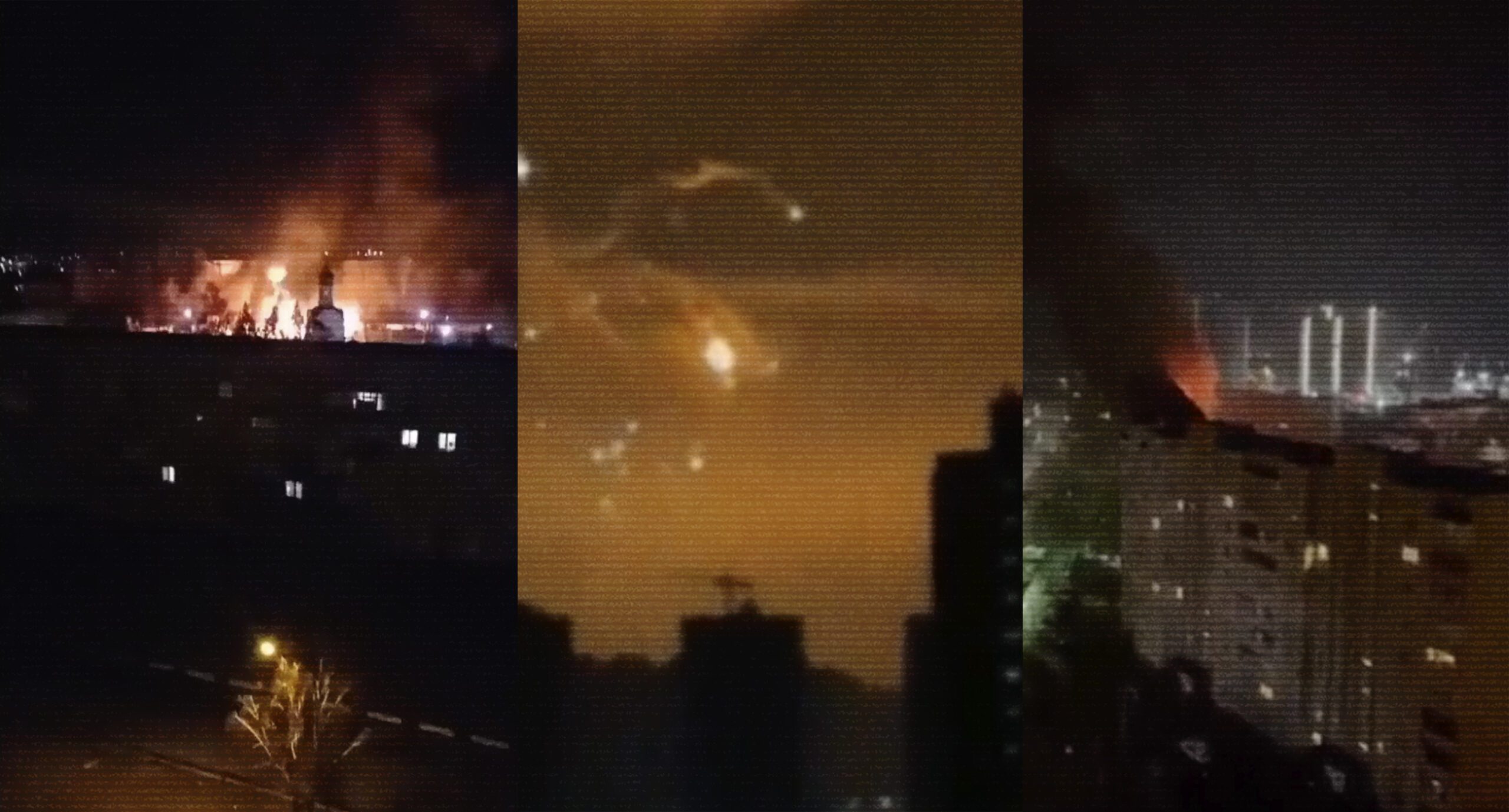 On February 24, Russia declared war on Ukraine. During the first day of the war, 137 Ukrainians died and 316 more were wounded. Ukrainian Health Minister Viktor Lyashko said that the Russians were shelling hospitals, in flagrant violation of the Geneva Convention. Zaborona has compiled the main events of the past evening and night that you may have missed.

We published two large pieces with the chronology of the first day of war: here is the first one (English) and the second one (Ukrainian). We are also working to inform you promptly about the most important news on our website and in Telegram.

In the evening, the occupiers took control of the Chernobyl nuclear power plant and captured its workers.

In Snovsk, Chernihiv region, according to Anton Gerashchenko, Advisor to Minister of Internal Affairs, a Russian tank stalled. Local residents dragged the tankers out and took them prisoner, while the tank itself was set on fire.

There was fierce fighting on Snake Island in the Black Sea — due to shelling by the militants with ship-based weapons and combat aircraft, not a single surviving building remained there. Subsequently, communication with the island was lost. Zelensky said in his speech that all 13 border guards defending the Snake island were killed.

There was also persistent fighting at the Antonov airport in the town of Gostomel. At one point it even came under the control of the occupiers. But in the end, all attacks were repelled and Gostomel was liberated from Russian soldiers.

In Sumy region, the Russians set up their camps. Locals say that the enemy forces have settled in Tokary, Kosovshchina district and in Nyzhnya Syrovatka, Sumy district.

Support units in Okhtyrka stopped another enemy offensive and repulsed the occupiers twice.

A grouping of the Ukrainian Naval Forces continues combat operations in the southwestern part of the Black Sea. The Ukrainian military is defending the base points and ports of Odessa, Yuzhny, Ochakiv, and Chernomorsk.

At the same time, the Air Forces of Ukraine repelled Russian air strikes during the night. Strikes were carried out against convoys of occupation troops near Nova Zburuivka and Nova Kakhovka in Kherson region and in the town of Kupyansk in Kharkiv region.

Groupings of the united forces in Donetsk and Luhansk regions restored the front line positions as a result of combat operations in several directions. The enemy is attempting to cut into the battle order of our troops to the depth of platoon strongholds in several areas.

As of 03:40 Kyiv time, fighting for the regional center continued in Sumy region. “Enemy equipment set off in the direction of Kyiv. Many enemy vehicles transited past Sumy in the western direction. The exit in the direction of Kiev is open, but there are Russian checkpoints on the roads already,” said Dmytro Zhivitsky, head of the Sumy Regional State Administration. The region has gone into civil-military administration mode. Full mobilization has been declared there, locals are asked to prepare personal weapons and make Molotov cocktails.

An aircraft was shot down in the capital at 04:20 by the Ukrainian air defense. It fell on an apartment building at Koshitsia street 7A, Darnitsa district of Kyiv. Three people were injured, one person is in serious condition. Emergency services are working at the site. The house was on fire, there is a danger of destruction. About 150 people have been evacuated.

A fragment of a plane caused a fire in a private house on Sadova Street 54 in Kiev.

At the same time, the enemy attacked Primorsky Posad border unit in Zaporizhia region. As a result of the attack, there are dead and wounded among the border guards.

The Armed Forces of Ukraine put up a fight against Russian tanks marching toward Kiev near the village of Ivankov, 80 kilometers from the capital. The military blew up a bridge to stop the convoy.

Fighting continues in the city of Sumy and in Kharkiv region.

As of 6 a.m., according to the AFU General Staff, units near Kropyvnytsky in Kirovohrad Region were targeted by the occupiers’ air strike. In addition, significant activity of enemy helicopters was recorded near Vilkove in Odessa Region and in Tiraspol, the capital of the unrecognized Pridnestrovian Moldavian Republic.

Airborne assault troops of the AFU are fighting near the settlements of Dymer and Ivankiv near Kyiv — numerous enemy armored vehicles have advanced there. The Ukrainian military stopped superior enemy forces at the line of the Teteriv River, which flows into the Kyiv water reservoir. The bridge over the river was destroyed.

Warning sirens went off in Kyiv, Lviv and Chernihiv around 7 a.m. The Kyiv city administration stated that this was not a training alarm — an air threat had been detected over the capital.

In Romanivka, a residential quarter of Irpen, 20 kilometers from Kiev, a bridge was destroyed to prevent the Russian army from passing through. The exit to Kyiv via Novoirpenka highway is still inaccessible.

Reaction of the authorities

Ukrainian President Vladimir Zelensky signed decrees on the creation of military administrations on the basis of regional state administrations and on general mobilization of the population. The State Border Guard Service announced that they will not let men aged 18 to 60 out of the country. This ban will be in effect for the period of the martial law.

In addition, a curfew has been imposed throughout almost all of Ukraine:

Odessa region, Berezovsky district and Artsiz city from 22:00 to 5:00

The Ministry of National Security said that some documents in action will not be available due to security reasons. The national security services are shutting down all the state registries until the situation in Ukraine stabilizes — it is necessary to keep the data of Ukrainians safe.

According to deputy defense minister Gana Malyar, additional weapons have been brought into Kiev for those who want to join the territorial defense.

Hacker group Anonymous declared “cyberwar” on Russia. The collective is officially in cyberwar against the Russian government, their statement reads.

The Anonymous collective is officially in cyber war against the Russian government. #Anonymous #Ukraine

Hackers also said they are taking responsibility for the cyber-attack on RT TV channel. The Russian-language version of the website is now impossible to access.

UK: British Prime Minister Boris Johnson announced new sanctions against the Russian airline Aeroflot — it is banned from flying into the country. Assets of major Russian banks, including VTB, have been completely frozen on the territory of the country. Russian companies will also be banned from attracting financing in the British markets. Additional sanctions will be imposed on Rostech companies. Johnson said that Britain is currently preparing a package of sanctions against Belarus.

Russia: anti-war protests took place in many major cities of the country, arrests of the participants began immediately. According to the Russian human rights project “OVD-Info“, over 1.7 thousand people were detained at anti-war rallies throughout Russia.

Poland: the country has opened its borders to refugees from Ukraine. At the same time, they are preparing a train to evacuate the wounded from the territory of Ukraine and are preparing places for them in 120 medical institutions. Poland is also allocating about $1 billion in emergency aid.

Latvia and the Czech Republic: both countries have stopped issuing visas to Russians. “Taking into account Russia’s aggression in Ukraine, I have decided to recall the Latvian ambassador to Russia for consultations and to suspend the issuance of Latvian visas to citizens of the Russian Federation, except for cases related to special humanitarian considerations,” Latvian Foreign Minister Edgars Rinkēvičs wrote on Twitter.

France will provide Ukraine with 300 million euros of aid and military equipment.

The European Union has agreed on a package of new sanctions that will have far-reaching consequences for the Russian economy and Russian elites. The sanctions are imposed in the financial and energy sectors, transport, export controls and visa policy.