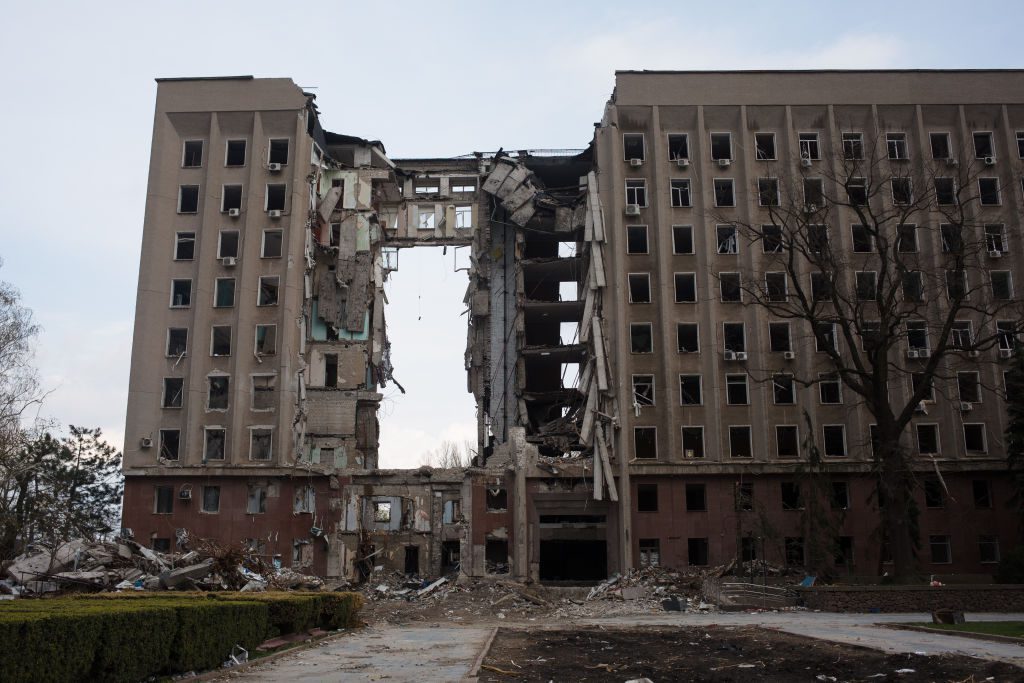 View of the building of the Mykolaiv regional council, which was destroyed as a result of attack on April 21, 2022. Photo: Anastasia Vlasova / Getty Images

The Russian army can take Mykolaiv only one way — to level it to the earth. But this will not happen because the occupiers are exhausted in the Donbass, and have no opportunity to replenish reserves. The enemy is in Zugzwang: taking weapons from hot bridgeheads will mean losing, as will pulling from the outskirts of the pseudo-empire because it will expose the borders.

Zaborona tells about the situation around Mykolaiv and the sharpest points, according to the combat major general of the Armed Forces of Ukraine, Dmitry Marchenko. It was he who led the defense of Mykolayiv during the full-scale Russian invasion of Ukraine in February-March 2022.

Russia Will Not Be Able to Capture Mykolaiv: Marchenko Explained the Reasons

The military of the terrorist country to try to capture / destroy Mykolaiv will have to draw forces closer to the city on the outskirts of which they received a noble beating in March 2022.

«There must be artillery, but for this, we need to get closer, and for this, we need to attract all the artillery, missile and jet potential that they have, bringing it from Russia. Russia is a massive country. Its problem is not only that we are resisting, its problem is that in addition to attacking us, it still has to hold the rest of its territories», — Major General Dmytro Marchenko told NivVest in an interview.

According to him, this also requires military potential: missiles, personnel. Marchenko stressed a well-known fact: the Russian army in Ukraine has already lost 20% of its potential, and they simply cannot afford to lose another 20%.«And to have at least some success, they need to transfer to Ukraine at least 30% of their potential.

Accordingly, if they have minus 50% of the potential, you understand that the country is becoming weak. Their sovereignty is already in question», — stressed the defender of Mykolaiv.

According to Marchenko, the higher command of the Russian Federation cannot transfer to Mykolaiv or any other direction [still] manpower and equipment with weapons from Kharkiv, Mariupol or Severodonetsk-Rubezhny. First, due to constant attacks, they will inflict heavy losses that cannot be recovered instantly, let alone transfer to other bridgeheads. Secondly, they are «stupid», but they understand perfectly well that as soon as they weaken the point, there will be a counterattack, and they will lose.

«Putin believed in the holiday and hoped that before they could cross the crown of Ukraine, they would become winners. He was very wrong. The problem with the Russian army is the same as we have had for some time — global corruption. … He [Putin] has been deceived and is still being deceived. If he sees the whole picture that is really happening here, he will probably die of a broken heart», — predicted Major General of the Armed Forces of Ukraine Dmytro Marchenko.

Earlier, Zaborona spoke about British intelligence analyst, who explains why Russia can capture as much of the territory of the Ukrainian Donbass.