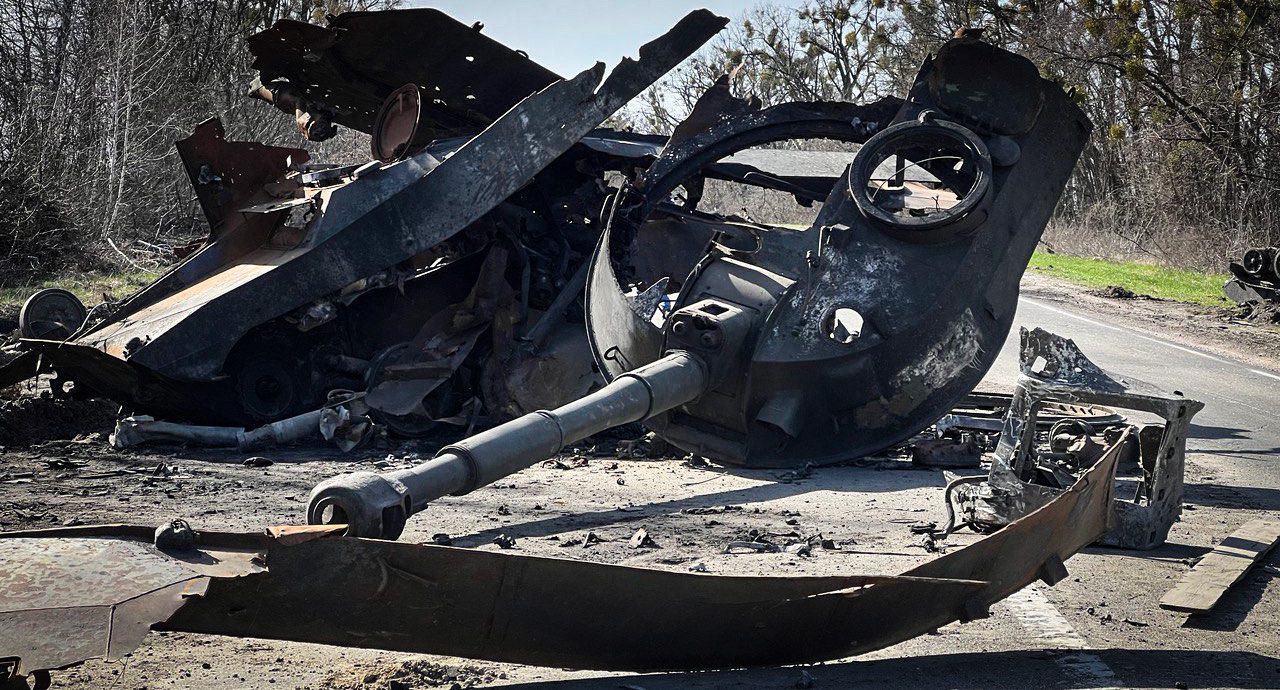 On March 30, Russian troops were forced to retreat from northern Ukraine and leave the towns and villages of Kyiv, Chernihiv, and Sumy regions. The operation of the Russian occupiers failed, and the resistance of the Ukrainian army and citizens exceeded all expectations of both the West and the Kremlin, which planned to capture key cities in Ukraine within three days.

Zaborona reports what residents of one of the villages in the north of Kyiv region had to face during the occupation – and how they live now, after the liberation.

With the withdrawal of the Russian army, the world saw what it was capable of: destroying, looting, torturing, and killing civilians. According to the Prosecutor General’s Office of Ukraine, the deaths of more than 1,222 people have been confirmed in the Kyiv region alone.

Despite the lack of electricity and water in many liberated cities, residents are beginning to return home, although local authorities are asking them to wait a bit.

Nadiya Bila, a resident of Katyuzhanka in the north of the Kyiv region, is one of the hundreds of thousands of people who have been under occupation. In mid-March, she was able to leave the village, and now that the danger has passed, she goes there to check on her home.

She knows firsthand what Russian soldiers were doing in her village.

“There was a [local] man who asked them, “Why are you here, who are you freeing us from?” He was killed immediately.”

“Those who were driving towards the convoy of vehicles tried to leave. They were shot point-blank,” says Osadcha. “There was a car in which a woman was traveling with her husband. The woman took out her phone and the Russian shot them. The wounded woman was taken to the school basement, but she bled out there. She was buried together with her husband in the schoolyard, and then reburied.”

Nadiya remembers hiding in the basement of the school. At that time, they did not yet understand that the artillery was not firing at them, but from their territory – at Borodyanka, Hostomel, Irpin, and Bucha. Then the Russian invaders directly came to them.

“Three soldiers came and said: men move to the left side, women to the right. It felt like we were Jews during World War II and now they are going to take us to the stadium and shoot us,” Nadiya Bila recalls. “We moved feeling like these were our last minutes.”

When Nadiya and her fellow villagers were walking home from the basement, she saw bodies on the streets of Katyuzhanka.

“A moped on one side and a dead man on the other,” she says.

The Russians occupied Katyuzhanka on the first day of the invasion and turned the village into a fortress. The local school became the command center of the operation to capture Kyiv from the northwest.

Russian soldiers left messages for Ukrainian children on a blackboard in the math classroom. In them, they wish the children “to live in peace with the Russians.” Margarita Simonyan, editor-in-chief of the Russia Today propaganda TV channel, even published this message on her Telegram, calling it “touching.”

Katyuzhanka school principal Mykola Mykytchyk doesn’t erase it from the board so that everyone remembers the price of the “Russian world”. The school administration is still counting the damage from the Russian occupation. According to preliminary estimates, it is about four million hryvnias (135 600 USD). Hastily leaving the village, Russian soldiers tried to steal everything that had even a microscopic value. For example, components of old school computers were stolen.

“Only the cases remain, and there are no computers,” says Mykola Mykytchyk. “51 computers and 40 laptops were missing. We had 20 classes with multimedia boards and projectors. All the equipment was stolen.”

Russian soldiers offered the school principal to become a collaborator, but he refused. Then they came to him with a search.

Nadiya Bila risked being shot, as happened in other occupied cities. But she didn’t know it then. However, her neighbors remained under occupation.

“A Russian soldier asked us, ‘How are you here?’ And my husband replied, “It’s like being in prison,” said Katyuzhanka resident Tetyana Detkova. “The soldier looked at us in surprise. My husband said: “There is no light, no water, no civilization. There is nothing that our people are used to. We’re not allowed to go anywhere…”

Residents of liberated towns and villages remain in uncertainty. It is unknown whether there will be an attempted re-invasion by the Russians. It is unclear where to get resources to restore cities at a time when literally half of the country is at war with the invaders. Most of the work on the restoration of infrastructure and the distribution of humanitarian aid was undertaken by volunteer organizations.

“The Scale of the Destruction and Woe Doesn’t Fit In My Head.” A Travel Diary of the Russian Crimes

“I Was Sitting on My Mother’s Knees. That’s All That Was Left of Her.” The Story of a Girl Whose Relatives Were Shot by the Occupiers