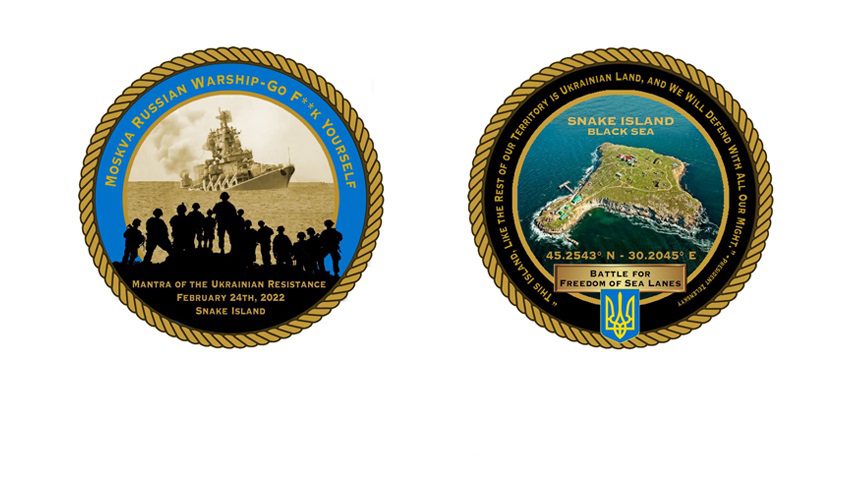 The White House issued a unique collector’s coin in honor of the liberation of the Ukrainian Snake island. 20% of all profits from this sale will go direct to Ukrainian women and children in need. The coolest detail of the coin is the legendary phrase that sends a Russian warship in the direction that everybody knows.

Zaborona tells about a unique souvenir item released in the USA in support of Ukraine.

Snake Island Coin: How And Where to Buy It

The coin depicts the island itself, and on the back there is an inscription of the legendary phrase of Ukrainian defenders “Російський військовий корабель — іди нах*й”. It sounded on the first day of the Russian invasion of Ukraine from the mouth of a soldier of the Snake island garrison. In English, it sounds like “Moskva Russian Warship, Go F**k Yourself”.

The coin became the 34th in the Global Historic Moments of the American and World Presidencies Coin Collection, where it entered at number 9. Its design was developed by artist Anthony F. Giannini.

The cost of one is $100, you can pre-order it now on the official website. Delivery will begin on September 30, 2022. The shipping to Ukraine and all NATO countries will be completely free. In the set, each coin will come with a velvet presentation case with a gold presidential seal and a certificate of authenticity with an edition number.

20% of all profits from the sale of coins will be used to help Ukrainian women and children in need.

The phrase about the Russian warship became viral, especially in the first days of the invasion. People were sure that the brave Snake island garrison had died in the battle with the invaders. However, in March 2022 it became known that they were captured altogether with the rescue ship Sapfir. Later, the border guards managed to be released through the procedure of exchanging prisoners of war.

Earlier, Zaborona talked about a unique €2 coin with the phrase “Glory to Ukraine” on it, designed by a Ukrainian refugee, which is planned to be put into circulation in Estonia.