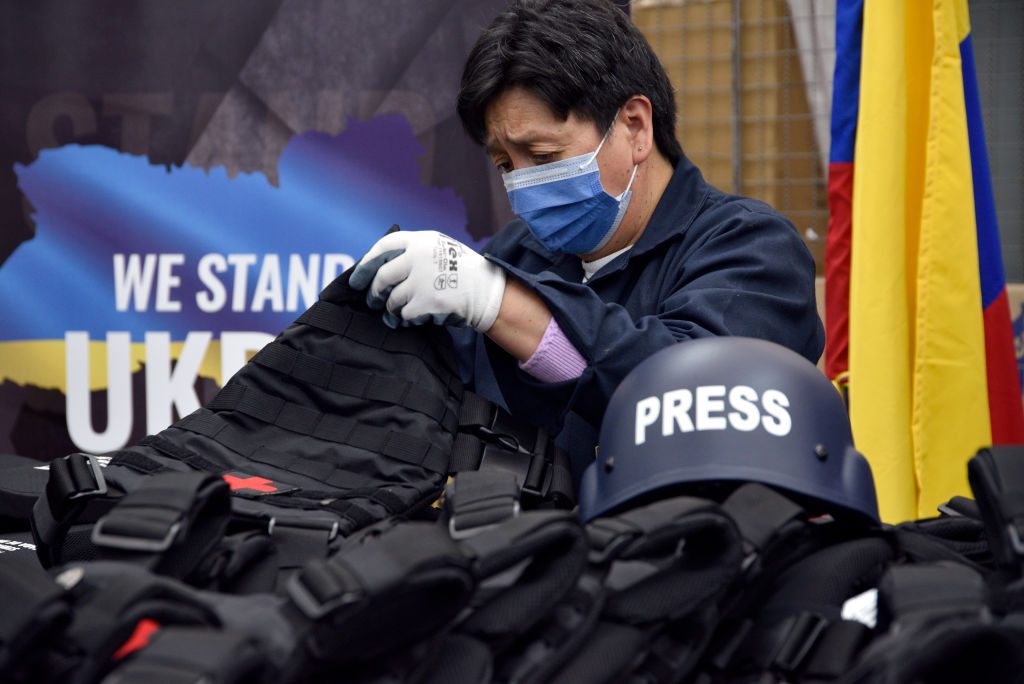 An employee arranges ballistic protection equipment ready to be shipped to Ukraine at MC Armor factory in Cota, on the outskirts, on March 09, 2022 in Bogota, Colombia. Photo by Guillermo Legaria Schweizer/Getty Images

Russia’s Federal Service for Supervision of Communications, Information Technology and Mass Media (Roskomnadzor) threatened Ukrainian news agency Zaborona Media with a ban on its activities in Russia. Punishment can be avoided by removing from the agency’s website the article about Molotov cocktails, written in Ukrainian.

The letter with the requirements of the Russian service was received by e-mail by Zaborona and website’s hosting. Needless to say, Zaborona will not satisfy any requirements of Roskomnadzor.

Letter for Zaborona from Roskomnadzor

On April 26, 2022, Zaborona received a letter from the Federal Service for Supervision of Communications, Information Technology and Mass Medias of the Russian Federation.

“It is notice of making an entry into the ‘Unified register of domain names, Internet web-site page links and network addresses enabling to identify the Internet web-sites containing the information prohibited for public distribution in the Russian Federation’ the Internet website page (s) link (s): https://zaborona.com/yak-zrobiti-koktejl-molotova-osnovni-reczepti-ta-lajfhaki,” said in the statement (screenshot below).

Thus, Roskomnadzor has entered the Ukrainian-language version of the article
“Bandera Smoothies” for Putin’s Friends. How To Make a Molotov Cocktail – Basic Recipes and Life Hacks in its register of undesirable resources. The article was published on Zaborona’s website on February 27, during the first days of Russia’s full-scale invasion of Ukraine.

It is quite absorbing that in exactly two months the Ukrainian-language version of this article received only 4,726 unique views, including 37 from Russia. Much more views (30,000+) were received by the English-language version, which for some reason did not cause objections to Roskomnadzor.

“The situation looks highly comical, because the institution of censorship of the occupying country, Roskomnadzor, demands the Ukrainian media to remove the article in Ukrainian language. Why not to demand the same from the British or Chinese press? And the fact that they are worried about the article on how to make a Molotov cocktail sounds like an anecdote. However, I believe that this is also a signal to the Ukrainian press that Russia is trying to interfere in the Ukrainian information space, to seize it as if the Russians have some right to it,” said Kateryna Sergatskova, co-founder and editor-in-chief of Zaborona Media.

“In case the hosting provider and (or) the Internet web-site owner fail to take these measures, the network address enabling to identify Internet web-sites containing the information prohibited for distribution in the Russian Federation will be decided to be entered into the Register and access will be limited,” said in a letter from the Russian censorship authority.

“Of course, we are not going to remove the article. The Russians are forcing journalists and editors to cooperate with the enemy in the temporarily occupied territories, and they are taking their relatives hostage. They shoot at public broadcasting towers and kill journalists in the war zone. But their murderous censorship will be lifted sooner or later. Destroyed by our Javelins of the free world,” claimed Kateryna Sergatskova.

Let us remind you that in Ukraine was established 24.02, the Journalism Emergency Fund, which is designed to provide those who work in dangerous places with the necessary protection. For now, all fund’s administrative and financial operations are handled by Zaborona Media Europe in Estonia and SaintJavellin in Canada.

Earlier, Zaborona proclaimed about the editorial board’s decision in principle not to publish materials (neither news nor large formats) in Russian language.