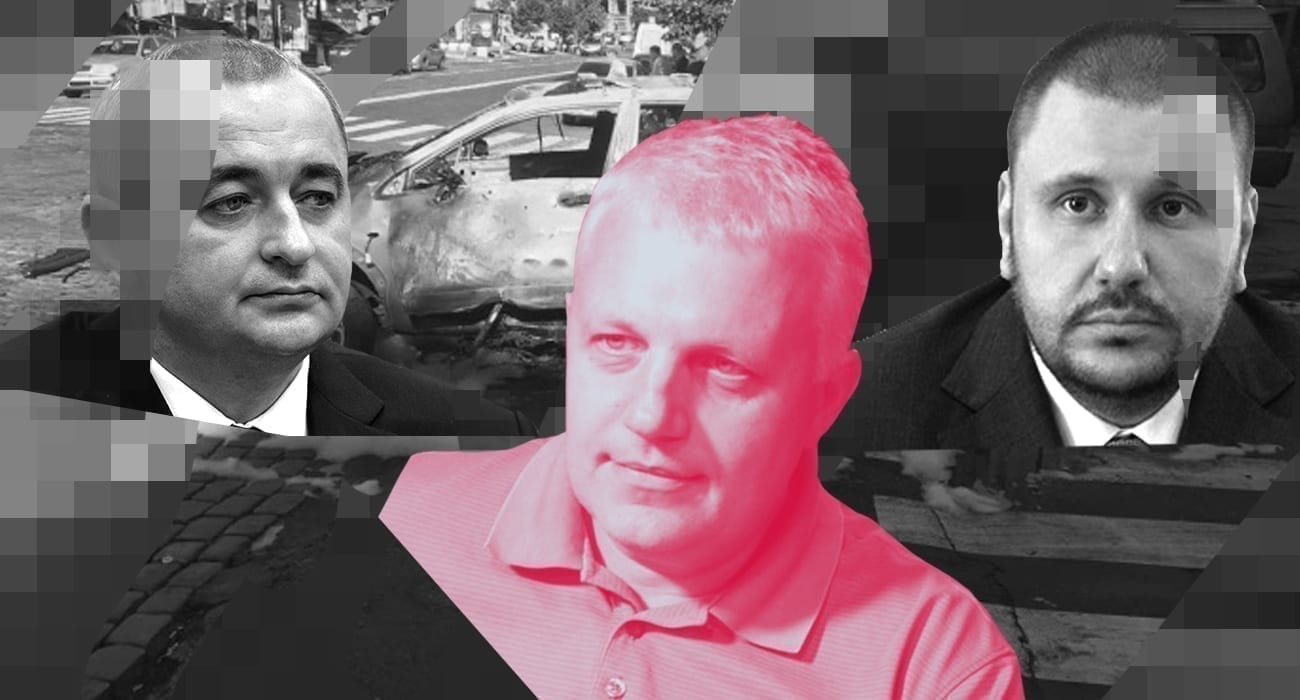 On September 22nd and 23rd, Zaborona published a large investigation about the murder of our colleague Pavel Sheremet (here is the first, and here is the second part). We found out that there is another twist in the case, which leads to Oleksandr Klymenko, who was the former Minister of Revenue and Duties during Viktor Yanukovych’s time in power, and to Anatoly Matios, who at the time of Pavel’s murder was the military prosecutor. However, the police did not pursue this version of the story. A month after the publication of the investigation, we tell you how the defendants and government departments reacted (spoiler alert: ambiguously).

The main thing from the Zaborona investigation

A month after the murder of Pavel Sheremet, the internally displaced person Maryna Matsyuk, who had lived in Mariupol, went to the police. She said that her acquaintance Maxim Zotov had personally confessed to her in the murder of the journalist. Maxim Zotov is an influential Donetsk businessman with close ties to the fugitive oligarch Oleksandr Klymenko. Klymenko headed the Ministry of Revenue and Duties during the presidency of Viktor Yanukovych, and after Euromaidan fled to Moscow, where he remains to this day. Klymenko is also the informal owner of Vesti holding, which included the radio station where Pavel Sheremet worked. Shortly before his death, Sheremet went to the fugitive oligarch for a meeting – he wanted to head Radio Vesti, but the negotiations resulted in nothing.

The version told by Maryna Matsyuk looks fantastic – it’s hard to imagine that Zotov decided to confess murder to his acquaintance. Therefore, it is possible that she deliberately slandered Zotov. This could be beneficial to the former military prosecutor Anatoly Matios, who shortly before Sheremet’s death had gained control over the Klymenko case. He was also friends with the journalist – they saw each other literally a few days before Sheremet’s death, discussing, among other things, the fugitive oligarch. In 2017, the military prosecutor’s office detained a number of Klymenko’s subordinates in the framework of the so-called “helicopter case”, but a year later all those detained went free.

After Zaborona published the first part of the investigation about Maksim Zotov and how he is connected with Oleksandr Klymenko, the speaker of the Ministry of Internal Affairs Artem Shevchenko contacted us. He said the police had checked Matsyuk’s testimony – notably, her husband told investigators that Matsyuk and Zotov had a “long-standing conflict.” Therefore, the investigators did not pursue this version further. Apart from Artem Shevchenko, the news outlet Babel also referred to an anonymous “source familiar with the course of the investigation,” who said that Matsyuk’s version was checked by “many operatives” and was ultimately not verified. However, Zaborona has neither the interrogation of Mykola Matsyuk, nor the Zotov case materials at its disposal.

We sent inquiries to the Ministry of Internal Affairs and the Prosecutor General’s Office asking them to say whether the investigators had interrogated Maksim Zotov and Anatoly Matios, and whether they had checked Matsyuk’s version of the story. We asked the GPU to inform us whether the materials of the Zaborona investigation would be included in the case. This is especially important, because soon a criminal case should begin, in essence, against the current suspects in the murder of Sheremet – Andriy Antonenko, Yana Dugar and Yulia Kuzmenko. However, a month later (this is the maximum legal deadline for responding to such inquiries), we received no answers. The Ministry of Interior says that they are “preparing an answer,” and the GPU said in a telephone conversation that Zaborona is NGO, not a registered media, and therefore they aren’t obligated to respond to our request. Although this is not the case – departments are obliged to respond to journalistic inquiries regardless of their registration as media.

While preparing the investigation, Zaborona journalists repeatedly tried to contact all the persons mentionedl. They declined to comment. After the release of the investigation, the newspaper Vesti, owned by Klymenko, contacted Zotov. He stated that he lived in Kyiv, and not in the Moscow region, and as evidence presented a selfie with a fresh issue of Vesti against the background of the Gulliver business center. There is not only the Vesti office, but the office of the Epel business clan, with which Zotov is associated (he is married to Olga Epel). However, Zotov’s claim that he lives in Kyiv raises doubts, since he is registered as an individual entrepreneur in Krasnogorsk. By law, such registration is possible only at the registration address.

Zotov told reporters that he has not been in Mariupol for about 30 years. We believe that this is not so: in 2015-16, there was a forced re-registration of business and accounts in the territory controlled by Ukraine. A number of companies and Zotov’s individual entrepreneurship ID were re-registered in May-June 2016 in Mariupol.

Zotov stated that he had a conflict with Matsyuk allegedly 10 years ago, and after the publication of Zaborona, he filed a statement with the police about her giving false testimony. In addition, Zotov said that Anatoly Matios and his subordinates pressured him, demanding to give “slanderous testimony against Klymenko.” A source from Zotov’s inner circle also told Zaborona that due to threats from the military prosecutor, he had been forced to leave for a while to Israel, where his wife’s father, Mikhail Epel lives, and allegedly returned only after Zelensky’s victory in the presidential election. Neither Zotov nor his lawyers responded to Zaborona’s request to give an interview to our publication.

We asked the police whether the department had received a statement from Zotov and whether it would investigate Maryna Matsyuk’s alleged perjury, but did not receive an answer.

Soon after the release of the investigation, Zaborona was contacted by lawyer Yuri Zakharchenko, who represents the interests of Oleksandr Klymenko. He demanded to remove all references to Klymenko from the investigation, because they “disgrace the honor and dignity” of the fugitive oligarch.

The same claims came to other media, which published the material of Zaborona or gave news about it. Zaborona invited Klymenko to give an interview and state his position, but he did not respond.

After the release of the investigation, we once again contacted Anatoly Matios, asking him for comment. Matios asked our journalist Samuel Proskuryakov if one of the persons involved in the investigation, Vladislav Drager, was his brother. He further wrote: “Is your name Samuel or Samvel? This is very important for another group of journalists, Justice for Black Cash Matter. Ask them for my opinion!”. Apparently, this is a reference to the slogan Black Lives Matter.

What is happening with the Sheremet case now

The investigation has three main suspects – musician and military man Andriy Antonenko, doctor and volunteer Yulia Kuzmenko, and nurse Yana Dugar. According to the investigation, they killed Sheremet in order to “destabilize the situation in the country.” The suspects deny their guilt. Zaborona has already written in detail that there are many inconsistencies with this case. Now that the pre-trial investigation has been completed, the case is being considered by the Pechersk court and a jury has been brought in.

After the release of the investigation, during the court session on September 28th, Lyudmila Sheremet’s lawyer Andriy Leshchenko asked the court to attach Zaborona’s publication to the case file, and the defense agreed. However, the court refused, arguing that at the meeting the issue of a measure of restraint was considered. And at the last meeting, which took place on October 21st and where, because of the coronavirus, only TV operators were allowed, the court refused to question President Volodymyr Zelensky, Interior Minister Arsen Avakov and former prosecutors Yuri Lutsenko and Ruslan Ryaboshapka. When the defense asked about this, the judge explained that these individuals were not direct witnesses to the murder.