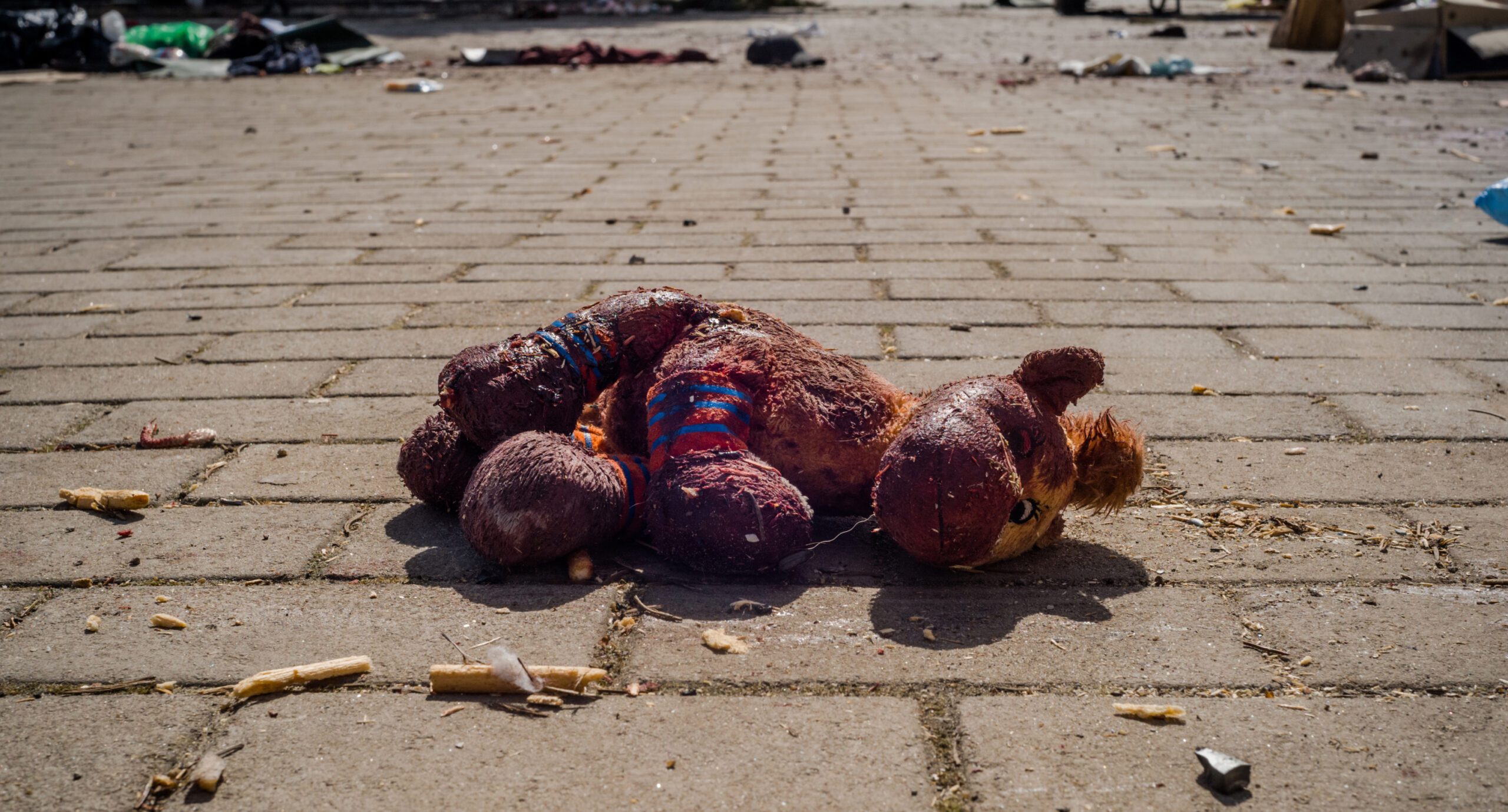 A bloodied toy at the railway station in Kramatorsk after a Russian rocket attack on April 8, 2022. Photo: Wojciech Grzedzinski for Washington Post via Getty Images

During the three months of full-scale war in Ukraine, Russia violates the laws and customs of war. From crimes against civilian Ukrainians to the destruction of critical infrastructure, the occupiers are constantly disregarding all established rules. Oleksandr Humeniuk, head of the investigative journalism department of Zaborona, explains what obligations of the parties to the military conflict are regulated by international humanitarian law and which of these the Russian Federation constantly violates.

What are the laws and customs of war?

The laws and customs of war are in fact international humanitarian law (IHL), a set of rules and responsibilities that apply during hostilities and to the parties to the conflict. Their main function is to limit the warring parties in what they can and can’t do. These rules should reduce the brutality and lethality of wars, which is especially true in the face of increasingly modern and deadly weapons.
The laws and customs of war did not always exist. Mankind came to understand the need to enforce certain rules only after many deadly wars that claimed hundreds of thousands of innocent lives. The first of the Hague Conventions were adopted in 1889, but the First World War, which began 15 years later, demonstrated the complete ineffectiveness of the rules: the parties did not comply with any of the prescribed requirements.
The understanding of the need to introduce new, clearer rules of warfare came after the end of World War II which was the bloodiest and had the largest number of casualties (including civilians) in human history. So in 1949, four Geneva Conventions were adopted, which became the basis of international humanitarian law.

At the same time, international humanitarian law does not explicitly prohibit the outbreak of wars – in fact, this is not discussed there. All the rights, obligations, and prohibitions listed in the conventions by default imply that the armed conflict is already underway. Therefore, the very fact of Russia’s attack on Ukraine is not prohibited by this law.

What norms regarding civilians does Russia violate?

One of the main tasks of IHL is to protect civilians during hostilities. The conventions clearly spell out all prohibited actions against civilians, but today’s war has shown that the Russian military ignores most of these prohibitions.

It is prohibited to commit murders and acts of violence against the civilian population.

From the first days of the invasion of Ukraine, the Russian army violated all possible IHL norms. There are confirmed cases of mass rape of women in the territories temporarily occupied by the Russians, which is expressly prohibited by the conventions. Another direct violation of these norms is the deliberate killing of civilians. And it’s not so much about rocket attacks on Ukrainian peaceful cities (although this is a violation), but about mass reports of shootings of civilians by Russian soldiers in occupied territories (Bucha, Irpin, Hostomel, Makariv, etc.).

It is prohibited to compel civilians to testify or tell any information.

The Russians also completely ignore this norm. There are known facts of finding dozens of bodies with their hands tied and signs of torture in the occupied territories of the Kyiv region (torture is also explicitly prohibited by IHL). Survivors describe how Russian soldiers interrogated civilian men and forced them to admit that they had taken part in the anti-terrorist operation.

It is prohibited to rob the civilian population.

The mass robberies by Russians in the occupied territories are a proven fact. In addition to countless interceptions of the occupiers’ phone conversations with their relatives boasting of their loot, as well as video from surveillance cameras from the Belarusian post office where Russians send loot home, there is also a lot of direct evidence when female jewelry, watches, office equipment and more were found in the clothes and belongings of dead Russian soldiers.

It is prohibited to force civilians to fight on the side of the occupying forces.

It has long been known that the Russians are carrying out mass mobilization among the civilian population on the territory of the so-called LDNR. This fact is confirmed by dozens of captured soldiers who say that they are teachers and representatives of other professions and admit that they were forcibly drafted into the ranks of the occupying troops and forced to go to war. In addition, there have been several reports that the mobilization of civilians has also begun in the Russian-occupied Kherson region.

It is prohibited to move civilians to the territory of the occupying state.

This is another requirement of IHL, which is completely openly ignored by the Russian army. We already know about the mass deportation of people from temporarily occupied territories to the side of the enemy. In particular, similar cases were reported in settlements near Mariupol, Severodonetsk, and Chernihiv.

What war crimes do the occupiers commit?

In addition to protecting the civilian population, the IHL conventions also clearly describe actions that the military is expressly prohibited from doing during the war.

Ill-treatment of prisoners is prohibited. Psychological or physical torture and inhuman treatment are prohibited. According to international conventions, prisoners have the right to food, water, and contact with relatives.

Numerous telephone conversations between the occupiers and their relatives, intercepted by the Security Service of Ukraine, repeatedly revealed how the Russian military boasted of torturing and abusing captured Ukrainian servicemen.

A number of types of weapons, which, due to the non-selectivity of targets, pose a direct danger to the civilian population, are prohibited for use.

The Russians not only use these types of weapons but also very often use them specifically against the civilian population. In particular, international conventions explicitly prohibit the use of mines, mine traps, and anti-personnel mines. This is due to the fact that civilians can fall victim to this type of weapon: people find themselves in places where fighting has taken place before and similar mines could be placed. Many ‘stretch mines’ were found in the cities liberated from the occupiers. Moreover, the Russian military very often placed various explosive devices on purpose before leaving the occupied territories. For example, an explosive device left by the Russians was recently found in Bucha in the piano of a 10-year-old girl who returned home.

International conventions also prohibit the use of cluster and phosphorus bombs. In the case of the first, during the detonation, a huge number of small metal pieces scatter, which poses a danger to all living things around. Phosphorus bombs belong to the class of incendiary weapons, which carries the risk of destroying a huge area. Despite the ban, the Russians actively used both cluster and phosphorus shells throughout the war.

It is prohibited to attack nuclear power plants and other objects, the destruction of which could lead to the leakage of hazardous substances.

The capture of the Chornobyl and Zaporizhzhya nuclear power plants by the Russians directly violates these norms, because in both cases, Russian troops could cause irreparable damage to all mankind. During the occupiers’ stay at the Chornobyl NPP, there were several episodes of loss of electricity needed to cool spent nuclear fuel storage facilities, which posed a direct threat to the entire region. During the storming and capture of the Zaporizhzhya NPP, the Russians neglected common sense and fired anti-tank missiles at the power plant building, one of which hit the power unit.

It is prohibited to attack buildings that are historical monuments, or cultural or spiritual heritage.

The Russian military is also ignoring this ban: during the fighting, they have repeatedly targeted churches and historical buildings. Kharkiv and Mariupol suffered the most from such crimes, a huge number of buildings of historical significance were destroyed or damaged there.

It is prohibited to attack civilian medical facilities.

The Russian military has repeatedly attacked functioning civilian hospitals in many regions, in particular, in Kharkiv, Severodonetsk, Mariupol, etc. According to the Ministry of Health of Ukraine, the shells and missiles of the occupiers targeted 600 Ukrainian medical institutions. 101 hospitals were completely destroyed without the possibility of restoration. 450 pharmacies were also destroyed by Russian terrorists.